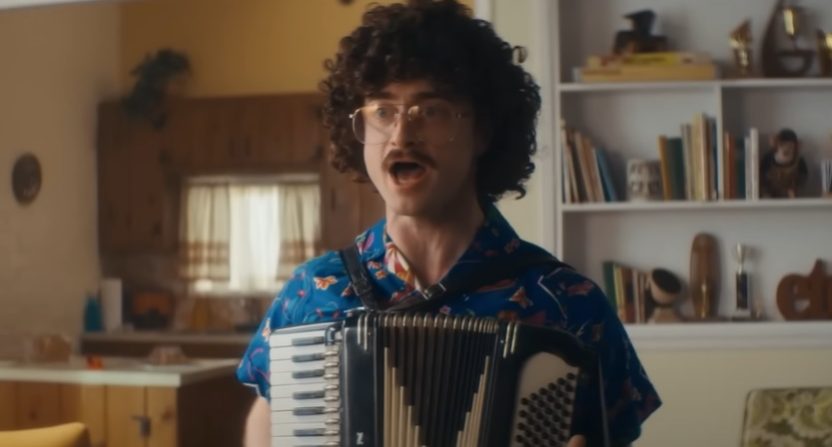 The cameos alone make it worth your time. We’re not going to spoil all of them for you, but you can’t go wrong when you have a movie that includes Lin-Manuel Miranda AND Jack Black. Weird: The Al Yankovic Story is the entertainment we deserve because it’s a music biopic that pokes fun at music biopics.

Yankovich, 63, is an American original who has outlasted many of the artists he has parodied. While the five-time Grammy Award winner hasn’t released an album of new work since Mandatory Fun (2014), he has remained culturally relevant since the 1980s. He’s immediately recognizable to generations who weren’t even alive when he scored his first hit single “Eat It“, a parody of Michael Jackson’s “Beat It“.

It would be difficult to do a serious biopic on Yankovich, a man who has built an empire by being silly. The only way to do it justice is to let Yankovich tell his story in the most ridiculous way possible.

We shouldn’t be surprised. Back in 2010, Funny or Die released a mock trailer imagining what a Weird Al film might look like. It was written and directed by Eric Appel. For Weird: The Al Yankovic Story, Appel and Yankovich teamed up again. The framework of the original idea is essentially the same, but over a decade later, there was more material to work with.

Music biopics are in greater demand than ever, thanks in part to the success of Bohemian Rhapsody (2018), the highest-grossing film in that genre of all-time. It won four Oscars, including Rami Malek winning for his portrayal of Queen singer Freddie Mercury. As a result, there are more on the way for icons like Whitney Houston, Madonna, Michael Jackson, Snoop Dogg, and Amy Winehouse.

The bad news is music biopics tend to follow a formula. The young artist is misunderstood at an early age until a mentor figure sees something special. After early struggles, the performer rockets to the top, but is eventually overwhelmed with the familiar trappings of success. The artist overcomes a crisis and returns to the stage with renewed vigor.

Weird: The Al Yankovic Story skewers that approach without directly pointing fingers. That’s always been one of Yankovic’s great gifts, being able to successfully parody without making someone feel like they’re the butt of the joke.

The leading man of this mock biopic is Daniel Radcliffe. Over the past decade, few actors have had a more interesting IMDb page. Radcliffe is not afraid to take chances, famously portraying a corpse in Swiss Army Man. As Yankovich, he throws himself into the role with sheer gusto.

One of the best scenes illustrates how Yankovic came up with the idea for “My Bologna“, his 1983 debut single that parodies the one-hit-wonder “My Sharona” by The Knack. Is this how the inspiration for that song really happened? No, but it’s so enjoyable.

As expected, the movie mines 80s nostalgia, when Yankovic rose to prominence. The pool party scene is an excellent example of that as several figures from that period pop up. See how many cameos you can spot. By far, the funniest is Jack Black’s Wolfman Jack. Not everyone will appreciate this hilarious imitation but it’s sure to make older folks howl with laughter.

Of all the 80s stars who appear, Weird: The Al Yankovic Story, focuses on the relationship between Yankovic and Madonna (Evan Rachel Wood). The two were never romantic in real life, but Yankovic’s “Like A Surgeon“, a spoof of “Like A Virgin“, is one of his most memorable songs and music videos. In the movie, Wood plays The Material Girl as over-the-top, devious, and manipulative. The chemistry between Radcliffe and Wood serves the movie well.

Weird: The Al Yankovic Story succeeds because it dares to be stupid. That’s the highest compliment you can give the master of parodies.