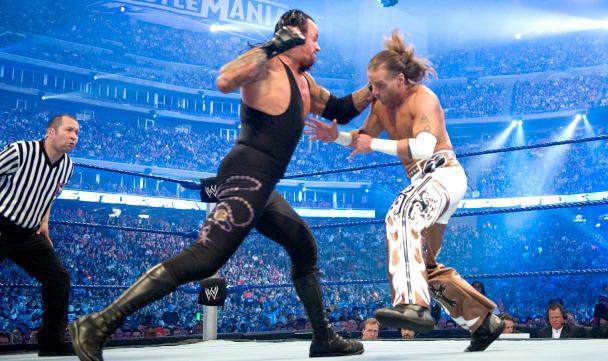 20. No Disqualification Match: The Undertaker vs. Triple H (WrestleMania 27) 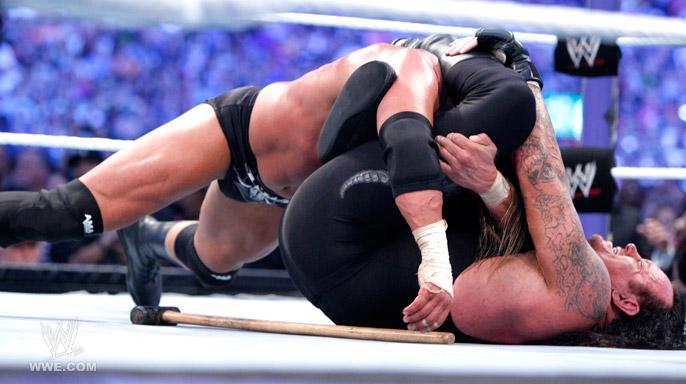 This was the second Undertaker/Triple H match at a WrestleMania. Their match from ten years earlier was really good, but this one and the one that followed were truly epic encounters. It was a face vs. face match (there are a lot of those) where it looked like maybe Triple H was going to be the guy that ended the streak. It didn’t happen, but he came so close so many times.

I was at WrestleMania 27 and it was an awful show for the most part. However, this match stole the show in every way possible. The ending of this match with Undertaker winning by using his Hell’s Gate submission was a brilliant finish because he had to be carted away. It left us wanting more and they topped this match a year later.

Mick Foley retired as a full time performer in 2000 yet here was back in the ring in 2006 in a Hardcore Match against a rising star in Edge. It was the perfect setup with the “Hardcore Legend” Foley putting his legacy on the line to prove that he still had what it takes.

This is one of those matches that most people will never forget for the spot at the end of the match. Foley was on the apron, Edge’s on screen girlfriend Lita was outside the ring setting fire to a table and Edge ran the ropes leading to a huge Spear on Foley that sent them both crashing through the table. It was a no doubter in terms of a match finish. Edge was elevated thanks to the quality of the bout while Foley was able to have his “WrestleMania Moment” years after he stopped wrestling full time.

In terms of favorite matches for me, this is near the top of the list because I was in the Superdome for this bout in New Orleans. After we already watched Daniel Bryan go nearly 30 minutes with Triple H at the start of the show, he was back out there to face two bigger opponents in Randy Orton and Batista, both of whom were heels after Batista’s failed run as a face.

They did this massive spot where Batista gave Bryan a Powerbomb through a table while Orton dropped him with a neckbreaker at the same time. Bryan was carted away making it look like he was done, but then he came back and found a way to win the WWE Title after getting screwed out of the gold several times in the previous year. Chanting “YES” with 70,000 was one of the best moments I’ve ever experienced as a wrestling fan. It was a damn good match too.

17. The Undertaker vs CM Punk (WrestleMania 29) The last WrestleMania in CM Punk’s career took place in 2013 when he was a heel and former WWE Champion, trying to end the infamous undefeated streak of The Undertaker. A few weeks before the match, The Undertaker’s long time manager Paul Bearer died, which led to Punk pouring ashes on Undertaker in a symbolic taunt of sorts. It made the feud feel really personal.

They had an incredible match where each guy was hitting finishing moves, the other guy was kicking out and it was tough for either man to win. It’s basically the formula that has been used for years for Undertaker matches. It’s the formula because it works no matter how many times we see it. The Undertaker won with a Tombstone that he used to counter Punk’s GTS attempt.

It was five years between WrestleManias for the great Shawn Michaels. A serious back injury sidelined him in 1998, then a serious surgery put any potential return in doubt until he felt better in the summer of 2002 and somehow he was able to wrestle for another eight years. While he’s had many classic WrestleMania, it’s this one with a cocky heel Chris Jericho that remains one of the best.

What really stood out in this match was the amount of nearfalls. There were so many spots where each guy would try to win with a cradle or something basic like that. It was done because it played into the finish, which was a Michaels win via a cradle. It’s a true classic between two of the best wrestlers ever. Don’t forget about the post match too because Jericho nailed Michaels with a low blow in order to remain a heel.

15. Money in the Bank Ladder Match: Edge vs. Chris Jericho vs. Chris Benoit vs. Christian vs. Shelton Benjamin vs. Kane (WrestleMania 21)

The first Money in the Bank Ladder match is still the best one. It took place 11 years ago as WWE presented us with this new concept (from the mind of Chris Jericho) where the winner had to climb a ladder to yank down a briefcase in order to guarantee a WWE/World Title shot any time they wanted. It sounded cool, but we didn’t know what the match would look like.

What we got was a Ladder Match classic as five of the best wrestlers were in the ring with the monster Kane. It led to so many memorable moments particularly from Shelton Benjamin, who is one of the more underrated WWE performers ever. In the end, as Chris Benoit looked like he was going to win the match, the heel Edge used a chair to hit him in the arm, knock him down and climb the ladder to win the first MITB match.

This was a dream match for a lot of people. Angle was the heel WWE Champion that was an Olympic gold medalist in freestyle wrestling. Lesnar was a NCAA standout freestyle wrestler that was built up to be the man in WWE in that first year. To WWE’s credit, they held off on doing this match for the entire year Lesnar was with the company, and they saved this match at the biggest show of the year, where it should be.

A lot of people may only remember the match for Lesnar’s missed Shooting Star Press, which was supposed to be the finish of the match. What those people are forgetting is that these two incredible athletes told a great story in the main event of one of the best WrestleManias ever. It’s even more impressive considering Angle was dealing with a serious neck issue at the time too. Lesnar got the win with one of his patented F5’s while Angle raised his hand to tell the world that Lesnar was legit.

13. Career vs Career Match: The Ultimate Warrior vs. Randy Savage

Careers were on the line as the “Macho King” Randy Savage faced the popular Ultimate Warrior. Both men were former WWE Champions that built up a rivalry because Savage cost Warrior the title a few months earlier. It led to a situation where both men had to put their careers on the line.

The drama was incredible in this match. At one point, Savage hit five top rope flying elbow smashes in a row. When he went for the cover, Warrior kicked out and the world was shocked. That’s when Warrior’s comeback began. He ended up winning the match in dominant fashion while Savage retired. Moments later, Savage’s manager Queen Sherri attacked him, so Savage’s estranged love Elizabeth came in for the save. People were crying at the sight of Savage reunited with Elizabeth after two years. Few matches in wrestling history can touch this match in terms of emotion. The action was really good too.

The WWE roster wasn’t that strong in the mid-1990s, but it was Michaels and Hart that were at the top in terms of having the most talent. That’s why it made sense that they were in the main event of WrestleMania 12, with Hart as the defending champion while Michaels was looking to win the WWE Title for the first time.

It’s the longest match in WrestleMania history with a runtime of 61 minutes 52 seconds. The match was scheduled to go 60 minutes in an Ironman Match where the guy with the most falls wins the match. There wasn’t a single fall in the first hour, so they went nearly two more minutes, Michaels nailed a decisive Superkick and that was it. A classic match that probably could have been better with more falls, but what they did still worked really well.

The best WWE Title matches often times feature the guys that have never been a World Champion before. Fans want to see if that guy can get to that next level to be the champion. Because of that reason, the crowd support for Chris Benoit was very strong as he went up against the heel champion Triple H with the legendary Shawn Michaels thrown in as the third man to make WrestleMania history with a triple threat main event.

It’s tough for fans to appreciate Benoit matches these days because of the heinous double murder suicide he committed nine years ago. However, if you like matches for the sake of the work in the ring, you should still appreciate the effort from these three men. It was a huge moment when Benoit made Triple H tap out in the middle of the ring while Michaels was out of the picture. One of the loudest ovations in WrestleMania history.