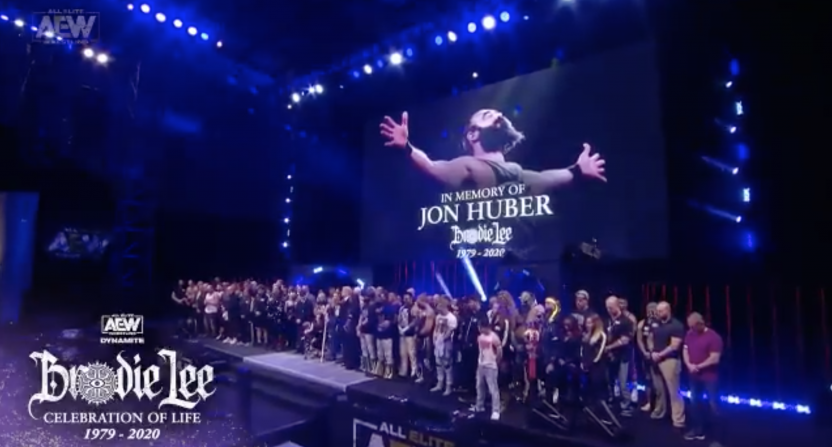 Since Jon “Brodie Lee” Huber died Saturday, many across the pro wrestling industry paid their respects and paid tribute to “The Exalted One” from AEW and “Luke Harper” of the Wyatt Family and Bludgeon Brothers from WWE.

Even before he was sick, Huber didn’t have any haters which is rare in pro wrestling. Everyone comes out to say nice things about someone after they die, but it seemed like people were doing that for Huber for years. Especially when it came to him being a father and husband.

WWE’s handling of Huber’s death was underwhelming to say the least. Yes, Huber wrestled for a competing company at the time of his death but given the kind of man Huber was and all the years he worked for WWE, the company sure dropped the ball as they seemed to do the bare minimum on TV as to give as less attention to AEW as possible, perpetuating a “war” that isn’t actually one and a “war” people really don’t care about in times like these.

It’s amazing what AEW is doing tonight for a guy who worked for them for 10 months as opposed to WWE where he worked for almost 10 years. #AEWDynamite

AEW’s tribute show on Wednesday night was on a level last seen when WWE honored Eddie Guerrero over 15 years ago. Members of the Dark Order wrestled in every match as Huber’s eight-year-old son Brodie Jr., stood ringside and watched the action while wearing a Dark Order mask. In the main event, Brodie Jr. saw his favorite wrestlers (Cody Rhodes, Orange Cassidy, and Preston “10” Vance) team up for one night only and win. And then at the end of the show, AEW CEO Tony Khan presented the real TNT Championship belt to Brodie Jr. because when his father had that title earlier this year, Brodie Jr. would sleep with that belt every night. After the show, it was revealed that AEW will redesign the TNT Championship belt as the current design has been retired and bestowed upon Brodie Jr.

Did anyone expect WWE to do a tribute show on the level like AEW did? Of course not. And in fairness to WWE, the initial announcement probably came as a shock and WWE had a much more limited staff to handle something like this the day after Christmas; so they were understandably a bit late to get something posted last Saturday night. But a couple days before AEW’s show, the extent of WWE’s three-hour Raw broadcast was a pre-show graphic and subtle tributes from the wrestlers throughout the show. No 10-bell salute, no video packages honoring Huber or out-of-character clips of those remembering (WWE posted a tribute on social media Thursday).

Huber was under contract with WWE a little over a year ago. Most of the current WWE roster knew him and worked with him and loved him. They could care less if he spent 2020 wrestling for a company Vince McMahon views as the enemy. If not mentioning AEW was so important to WWE, they could’ve just focused on the Luke Harper years on their TV broadcasts, which was the majority of Huber’s pro wrestling career anyway. There is a lot of space in between what WWE did and what AEW did that WWE could’ve done more to bridge that gap.

Because WWE’s reaction took so long on Saturday, some WWE wrestlers and legends like Beth Phoenix, Mick Foley, Charlotte Flair, Alexa Bliss, Ember Moon, and Paige retweeted AEW’s initial announcement in order to pay their respects. That kind of thing isn’t and shouldn’t be a big deal but after WWE got their ducks in a row, putting out a tribute and retweeting their wrestlers paying tribute, well let’s just say they weren’t retweeting Charlotte Flair.

In contrast, AEW retweeted tributes from those in every wrestling promotion that paid tribute to Huber. Because their most pressing concern at the time was remembering a colleague who tragically died way too young and not the fear of promoting another company by retweeting them.

Fans, industry leaders, and even WWE wrestlers looked to AEW’s leadership when it came to honoring Jon Huber on Wednesday night. After AEW’s tribute show, they got much deserved praise from such WWE people as Sasha Banks, Kevin Owens, Xavier Woods, Mustafa Ali, Trish Stratus, Big E, Dolph Ziggler, Sami Zayn, and Daniel Bryan as they praised AEW in some form for what they did. Again, this shouldn’t be a big deal but it says something when WWE did so little and AEW did so much.

Maybe this is finally the proof that Vince McMahon has truly been stuck in the past. He views WWE and AEW as another “Monday Night War” like WCW and WWE had in the 90s when in actuality, it’s anything but. Yes, AEW have made jokes (sometimes by Brodie Lee himself about McMahon) and there was that sledgehammer destroying a throne thing but business-wise, AEW is a startup wrestling company going up against a publicly traded company that is worth billions and has a 40-year head start. It’s going to take years before anyone seriously believes AEW is on WWE’s level.

The wrestlers sure don’t view this as a war. There are four relationships (Big Swole/Cedric Alexander, Dr. Britt Baker D.M.D./Adam Cole, Shawn Spears/Peyton Royce, Matt Cardona/Chelsea Green) between AEW and WWE talent. Wrestlers across all promotions, even those outside of AEW and WWE, are friends with each other. Technology has made the world much smaller than it was in the 90s and the only person who still believes that WWE people hate AEW people and vice versa and that they all want to destroy the other is unfortunately the one who matters the most in this industry.

The tribute of Jon Huber/Luke Harper/Brodie Lee could’ve been a moment for AEW and WWE to come together for the benefit of the pro wrestling industry and its fans to honor someone who meant a lot to many within both companies. Whatever war that’s real or imagined could’ve been set aside for a few days for the greater good. It seemed like AEW was game but WWE (or Vince McMahon) went all WWE (or Vince McMahon) and let ego get in the way. While Tony Khan might not have as much experience running a pro wrestling company and he’s certainly made mistakes the past couple years, this past week has shown that Vince McMahon might love WWE but Tony Khan loves pro wrestling and the people in pro wrestling. And that’s why we got Wednesday’s tribute show.

The great thing is, despite all that, pro wrestling fans and wrestlers are not going to let that get in the way of properly honoring a great person. Jon Huber brought so many people together and that enduring love and respect of those within the pro wrestling fraternity will be what we ultimately remember. Once Vince McMahon realizes that, he’s more than welcome to join the rest of us.