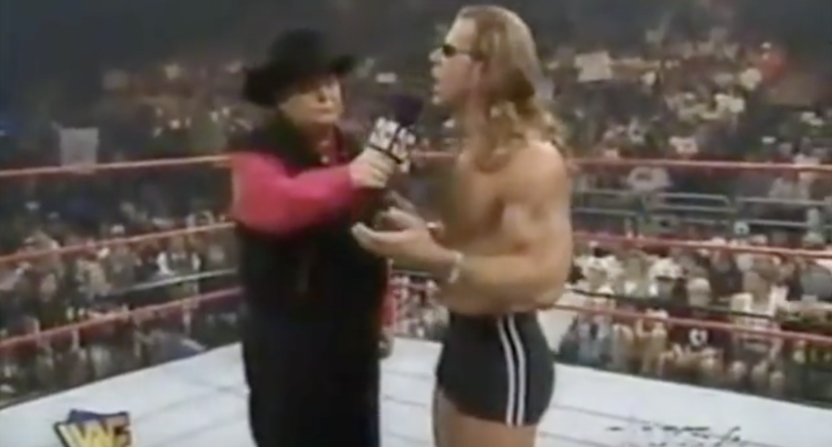 When you ask a pro wrestling fan what was the start of the “Attitude Era,” you get many different responses.

Some point to WrestleMania 13 where Stone Cold Steve Austin and Bret Hart had their classic Submission match. Some go to the Montreal Screwjob at the 1997 Survivor Series and Vince McMahon’s “Bret screwed Bret” promo that transformed “commentator” Vince McMahon into “evil billionaire owner” “Mr. McMahon.” Many point at WrestleMania XIV, where Stone Cold won his first WWE Championship with Mike Tyson as the Special Guest Enforcer. But while those were all era defining moments, it was a more inauspicious time where the term “attitude” entered the ethos of pro wrestling.

On this week’s episode of Bruce Prichard and Conrad Thompson’s podcast Something to Wrestle with Bruce Prichard, Bruce and Conrad celebrated the 20th anniversary of In Your House: Bad Blood and the first ever Hell in a Cell match by discussing the state of the business 20 years ago. To hear Prichard explain, it took Shawn Michaels going into business for himself and the absences of Vince McMahon and The Undertaker at a 9/7/1999 Raw taping to introduce “attitude” to WWE.

The above is a heavily edited version of the promo in question but Thompson goes into detail about the unedited interview that the live audience saw. Michaels apparently stuffed his tight biker shorts in order to appear to have a bigger crotch. And while Jim Ross is trying to interview Michaels, Michaels crotch chops him to his face, something that will eventually be a D-Generation X staple.

Thompson also reveals that Michaels was cursing during the interview, calling The Undertaker a “chickenshit,” and calling him out, knowing he wasn’t at the show. And while it would be incredibly disrespectful to go off script and bury a wrestler when they weren’t there, it’s especially disrespectful to do it to someone as revered and respected as The Undertaker.

Prichard revealed that everyone on the broadcasting side of the business was livid and angry at Michaels and said “it was a slap in the face” to both he and JR (who was running the show in McMahon’s absence) and a slap in the face to McMahon knowing he wasn’t there. Prichard also revealed that McMahon heavily fined Michaels for his actions but then explained how this resulted in everything over the next three and a half years being the Attitude Era.

“Vince fined [Michaels] heavily but then Vince takes a turn, and this is where the whole “attitude,” slogan, era, everything came out. Because Vince gets JR and I in a room and starts pointing at Shawn and saying [doing Vince McMahon impression] “What he’s doing, it’s showing attitude. We need more attitude! That’s attitude, pal! And everybody on the roster needs to find some attitude!””

“And attitude became the catchphrase over the next few years. Off of that one promo.”

While the full, unedited promo doesn’t seem to be available, WWE did use footage of Michaels crotch chopping “Good ol'” JR in the face in DX’s titantron videos. That Raw wasn’t live and editors did a great job salvaging the promo to make it look like something that could be used to advance the storyline.

Think about this, this industry changing and defining movement which has been fondly revered by millions of pro wrestling fans for the past 20 years was the result of Shawn Michaels stuffing his shorts and cursing out the most respected individual in pro wrestling. If it was anyone else other than Shawn Michaels, they would be fired. But because it was Shawn Michaels, it started the era that helped save WWE in the Monday Night Wars against WCW.

Definitely listen to the rest of the show as the guys talk about Bad Blood and the origins of the Hell in a Cell structure. Hard to believe it was 20 years ago, but it was a tuolmetuous time as WWE had to react to the untimely death of Brian Pillman the morning of the pay-per-view as well as having to deal with the unknowns of Bret Hart staying or going to WCW. This was the pay-per-view before the Montreal Screwjob so many things were going on and the business was rapidly changing. And Bruce Prichard was there to cover that time.