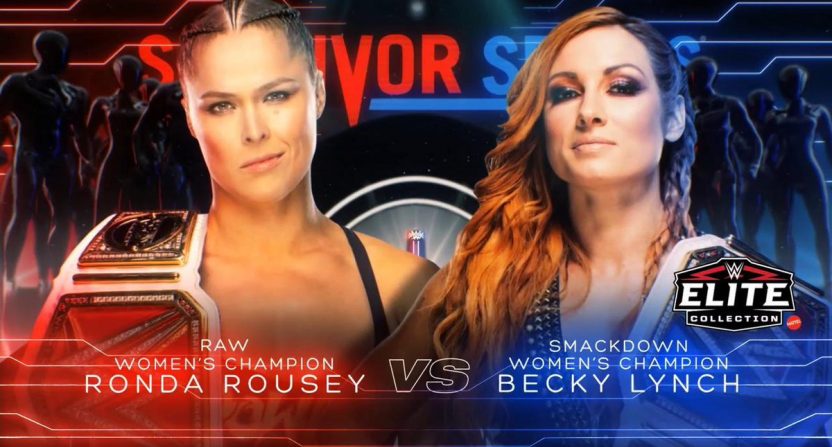 The next major WWE pay-per-view event will be the 32nd annual Survivor Series, which is set to take place at the Staples Center in Los Angeles on November 18. It’s a show where the seven matches announced so far feature Raw superstars facing off with Smackdown superstars.

If it feels like Survivor Series is creeping up on us, it’s because WWE only has two weeks to promote it. The last month saw the company focus on the excellent women’s only WWE Evolution PPV that was a huge success and the disappointing Crown Jewel event, probably the worst PPV of the year.

What I’m here to do today is tell you why two women, the Raw Women’s Champion Ronda Rousey and Smackdown Women’s Champion Becky Lynch, deserve to be in the main event of Survivor Series. By main event, I mean the last match on the card. This is not like WrestleMania, where WWE says the winner of the Royal Rumble is going to “main event” WrestleMania and then they get a match in the midcard. I’m talking about the last match on the card at Survivor Series.

5. There’s not another match advertised for Survivor Series that feels like a bigger match

Is there anything there that really jumps out to you as the main event from those matches? I just don’t see it.

Last year, the men’s elimination match went on last, which was fine because there wasn’t a standout match elsewhere on the show. Plus, WWE spent about one month building up to Survivor Series with Smackdown “invading” Raw, which actually made last year’s match feel personal. Here we are less than two weeks before the show and there are still names on the Raw side that need to be announced for that match. It doesn’t feel like the main event.

This year, there’s not much on the line other than “brand supremacy” or whatever other phrase WWE wants to throw out there to try to make us care. Put Rousey vs. Lynch on last. It’s the right choice.

4. They are using social media perfectly to add to their rivalry

If you’re on Twitter and/or Instagram, you know that Rousey and Lynch (aka “The Man”) are very proficient at using social media to talk trash. They need to take the rivalry to social media because they won’t be in the same ring together until Survivor Series. It’s possible that Lynch shows up at Raw next Monday or Rousey shows up on Smackdown next Tuesday, but as of now, neither is advertised.

Rousey has 3.66 million followers on Twitter, while her Instagram is even bigger with 11.6 million followers. Lynch is doing very well for herself too with 1.36 million Twitter followers and 3.1 million on Instagram. It’s smart for the women to use Twitter because they are the only ones with access to it (Rousey tweeted today that she writes all her tweets), so fans know it is coming from them. Obviously, the women are doing it to build up the match and I think WWE is happy with it because they encourage their stars to utilize social media to its fullest.

Here’s a sampling of some of the trash talk from Ronda (who is sometimes called “Ronnie” by Becky) and Becky’s social media.

Put me shoulder to shoulder and make me equal billing or I’m going to take it out on golden girl number two come Survivor Series #iamtheman https://t.co/tL0MmUNNNN

Okay Champ,@beckylynchwwe I really like this poster – I know my hand is slightly in front of you in this one, but I did the math and technically you take up over 50% of the area since I’m at a slight profile – and my elbow is little cropped out. Where as you’re 100% in frame👍🏼. I hope that’s okay with you, if not, my apologies and I will not attempt to take such liberties again and risk offending you.🙇🏼‍♀️🙇🏼‍♀️🙇🏼‍♀️ #RondaVsBecky #SurvivorSeries #Nov18th

Sorry for the delay, Ronnie – while you were playing with Microsoft Paint I was on the TV being a legend. You should watch, it would be like a training video for you. Watch how the master does it. Poster is still not right. Go again.

Hey Champ @beckylynchwwe does The Miz @mikethemiz know he’s disrespecting the The Man by being placed ahead of her on the Marine 6 poster? What a dick🙄

We’ll end it here with this gem from Lynch earlier this morning.

“Siri, who is my biggest Stan?”
“Ronnie”
“Rousey?”
“Yes”
“Show me evidence”
… pic.twitter.com/ekQTdeK1rk

Keep up the good work ladies, both in the ring and on social media. They are building this match up in ways that today’s fans absolutely love. The more they hype it, the more intrigue there is surrounding the match.

3. Ronda Rousey has proven she’s a natural in a WWE ring and is used to the main event spotlight

Rousey had her WWE first match at WrestleMania this year and six months later, she wrestled in her first main event when she beat Nikki Bella at Evolution. It shows how much WWE’s decision makers believe in Rousey’s ability in the ring and her drawing power to build interest for her matches.

Rousey has a lot of support from people in WWE, including Kurt Angle, the WWE Hall of Famer that teamed with Rousey at WrestleMania to beat Triple H and Stephanie McMahon. Angle recently did an interview with Sam Roberts for Ringside Collectibles talking about Rousey. Thanks to EWrestlingnews for the quotes:

“I think Ronda exceeded expectations from everybody. She did her homework. You can’t lie to anyone, Ronda was new to WWE at the time. She had very little experience but what she did at WrestleMania was unbelievable; she stole the show. I knew before we went in there (the ring), Triple H and I knew she should be the focus. If you watch that match, the focus is really on Ronda. That is what we had to do in order to get her to be where she is right now. She did a really great job.”

“I can’t believe how well, how quickly she adapted to it. I felt like it was me. A couple of weeks ago, she cut a promo (on Nikki Bella) in the ring and I was thinking that she was getting it way too quickly. This girl has been the best in judo, the best in the UFC but I think this is her thing. I think the WWE is the thing she’ll be the most known for. If healthy, another six-ten years, this will be her legacy.”

Angle may have a point. Rousey’s WWE legacy could be what people remember the most about her when her career is over. That legacy is only just beginning and having a big match against Becky Lynch at Survivor Series is a good way to add to it. Being in the main event of Survivor Series would help too.

2. Becky Lynch has earned the right to be in the main event of a PPV this year

The reason why Becky Lynch is where she is in WWE right now is that she earned it. It’s what she has said for months now. She was not the chosen one or the girl that was supposed to be the most popular woman in WWE. She is there because the fans respected her journey to where she is and because of that, Lynch gets ovations as loud as any man or woman in the company. Over the last two months, it’s been obvious that WWE’s attempts to get her over as a heel have failed, but what really matters is that Lynch is very over right now.

If you saw Smackdown this week in Manchester, the fans were chanting “Becky, Becky, Becky” as she stood in the ring just to deliver a promo. They wouldn’t let her talk until they got it out of their system. There aren’t many people that get that kind of reaction in WWE today.

The wrestling business is about rewarding talent. When they do well and reach a certain level, they’ll get a raise from the boss, but the fans on television don’t get to see that. What we do get to see are title wins, like when Becky beat Charlotte to become the Smackdown Women’s Champion at Hell in a Cell two months ago.

Another reward for Becky and Charlotte was having one of the best women’s matches in WWE history at Evolution two weeks ago when they went 30 minutes in a Last Woman Standing match. It’s a match that WWE fans are going to be talking about for years to come as an example of two women showing they can compete with the boys and do even better than them.

The next reward for Lynch should be the main event of Survivor Series. Nobody on the current WWE roster deserves it more.

1. To truly evolve women’s wrestling, WWE must put their women in the main event on major shows like Survivor Series

There have been two women’s matches that have headlined WWE pay-per-view events. The first time was Hell in a Cell 2016, when Charlotte defeated Sasha Banks in a Hell in a Cell match to win back the Raw Women’s Title. It was a big deal to a lot of fans, but for whatever reason, WWE didn’t treat it like a big deal. I was surprised that WWE didn’t treat it like a monumental occasion.

The other women’s match that headlined a WWE pay-per-view was Rousey beating Nikki Bella at Evolution two weeks ago, which is obvious because the show only featured women’s matches.

Who wins Rousey vs. Lynch at Survivor Series? I would be shocked if Rousey’s undefeated streak ended, so I’ll go with her. I doubt Lynch would be hurt too much from the loss even though a lot of fans would complain about her losing. I just don’t see Rousey losing until maybe next year’s WrestleMania or beyond that.

The message is clear: Ronda Rousey and Becky Lynch should be the main event of Survivor Series on November 18. It’s up to you, WWE decision makers. Make it happen.