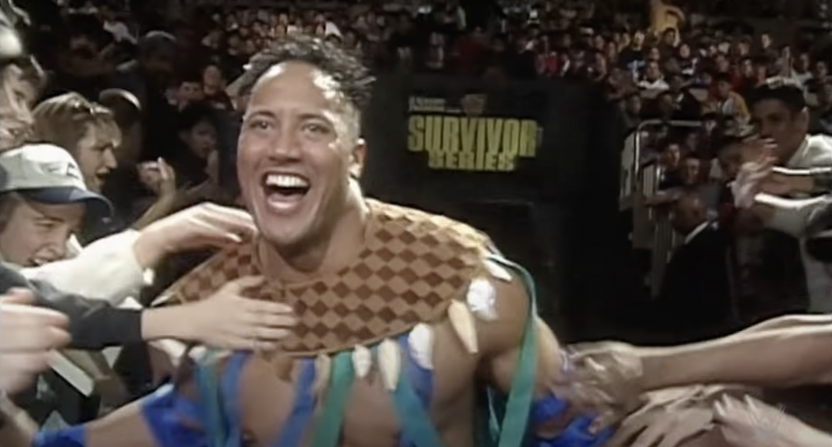 Every journey has to start somewhere and for Dwayne “The Rock” Johnson, his WWE journey started at Survivor Series 25 years ago. On November 17, 1996, “Rocky Maivia” entered the ring at Madison Square Garden with a “chia pet” on his head (his words), showcasing a very high energy good-guy attitude.

After football didn’t quite work out, Dwayne entered the family business. Just as his father (Rocky Johnson) and grandfather (Peter Maivia) did decades before, Johnson started training in 1996 for a pro wrestling career. Wrestling in dark matches and in Memphis as “Flex Kavana,” Rocky Maivia made his on-air in-ring WWE debut at Survivor Series 1996. Maivia received a lot of hype on WWE TV for weeks before the pay-per-view. Not everyone gets to make their debut at a top PPV at WWE’s home arena, but it was clear the company had high hopes.

The match, a traditional Survivor Series match included some legends and some future legends in the business. Maivia, Marc Mero, The Stalker (aka Barry Windham), and Jake “The Snake” Roberts took on a pre “Game” Hunter Hearst Helmsley (as Intercontinental champion), Crush, Goldust, and Jerry “The King” Lawler. Almost immediately, commentators Vince McMahon and Jim Ross were hyping up Rocky as “The Blue Chipper” as well as the first third-generation WWE superstar.

The match itself was what it was but it helped kickstart Maivia’s career and planted the seed in fans’ minds to see him as someone to watch for the future. WWE did things in this match to help Rocky look good. Wrestling in Memphis, Maivia faced local legend Lawler so he would have an opponent that fans wanted to see working with him. McMahon, JR, and guest commentator Sunny couldn’t stop singing the praises of Rocky when he was in the ring. And last, but not least, the finish pitted Maivia against Crush and Goldust with the babyface rookie defying the odds and pinning both people to become the sole survivor with the MSG crowd chanting Rocky’s name.

It was a successful night for the 24-year-old and catapulted him to rapid stardom, winning the Intercontinental Championship about three months later. This meteoric rise might’ve made sense when you’re building up a future main event talent but the business was at the precipice of a change and Maivia would be one of the first in the company to experience this shift.

You have to remember the time we’re in when it comes to pro wrestling. 1996 was a pivotal year that changed the industry forever. Five months before Survivor Series, rival promotion WCW began to pivot to a more realistic form of storytelling. They added Scott Hall and Kevin Nash and using their real names, made it look like WWE people were invading WCW. Then Hulk Hogan shocked everyone by turning heel at Bash at the Beach and the three started the nWo.

Suddenly, being bad was cool, and being good was lame and WWE hadn’t made the switch yet. Fans were seeing WCW become this modern and dynamic product while WWE was stale, and they took some of that out on Maivia.

“Die, Rocky, Die” became a mantra for fans who were rejecting someone the company anointed as the future who everyone had hopes of being the top face of the company. A change needed to be made and when he came back from an injury, “The Rock” returned as a completely different person.

WWE was implementing a more adult format while The Rock was away. It wasn’t quite the Attitude Era yet but it was a noticeable shift. The Rock joined the Nation of Domination and showed up with a chip on his shoulder and criticism for those fans who wanted Rocky to die. It was here that The Rock unlocked the charisma that would make him a bona fide star inside and outside the ring.

Now meant to get boos, The Rock was getting cheers; fans now saw him as a multi-dimensional character who talked the talk and then backed it up in the ring. Throughout 1997 and 98, The Rock was a mainstay of the Intercontinental Title scene and in the upper midcard, having great matches against the likes of Ken Shamrock, Triple H, and Owen Hart.

Now fully within the Attitude Era, The Rock was back to being a babyface and was knocking on the door of the WWE Championship hunt. At Survivor Series 1998, just two years after his WWE debut, The Rock would complete his path up the card and become WWE Champion after aligning himself with Mr. McMahon to win the “Deadly Game” tournament.

As the Attitude Era grew, The Rock became more and more of a mainstream celebrity. He was cemented in the main event picture wrestling in some of the best matches in WWE history. Inside the ring, The Rock had classic rivalries with Mick Foley, Stone Cold Steve Austin, Triple H, Kurt Angle, and Hulk Hogan, among many. Outside the ring, The Rock hosted Saturday Night Live and got into acting, starting with The Mummy Returns.

After The Mummy Returns, The Rock made his lead role debut in The Scorpion King as he balanced his time between wrestling and Hollywood.

Now, Dwayne Johnson is one of the highest-earning male actors in Hollywood as well as a co-founder of Seven Bucks Productions and co-owner of the XFL. He hasn’t wrestled since 2016 but still makes the occasional appearance on WWE TV. Maybe the planets align someday and The Rock gets back into the ring one more time.

If there’s one takeaway from The Rock and his pro wrestling career, it’s that there’s no such thing as a perfect path to stardom in pro wrestling. Even in this instant gratification social media era where the first instance that something stinks feels like instant death, it’s not and shouldn’t be the end of the world. Look at the WWE debuts of some of the legends in the company. The Rock had the fanbase turn on him within his first six months. Triple H started out as a snooty Connecticut blueblood. Steve Austin had hair and was known as “The Ringmaster.” John Cena was a bland prototype of a pro wrestler. All these people became WWE legends but there were times in their career where they didn’t look like they would be a main eventer.

Nowadays, whether it’s Roman Reigns, Seth Rollins, Becky Lynch, or someone else, the best of the best will be able to adapt and adjust when something isn’t working in order to be at the top of their game. Look no further than what The Rock was able to do 25 years ago.