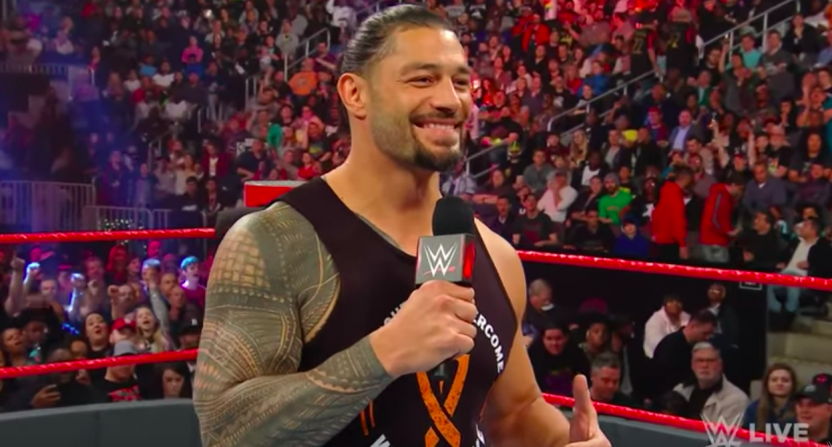 Since it’s sports entertainment, WWE is viewed in a very strange prism where it’s both a live action weekly show that’s more like a soap opera and a weekly sporting event where people compete against each other to see who’s the best. The entire pro wrestling industry is different from most other entertainment and sports entities.

Pro wrestling is also different from the sports and entertainment industries because there is no offseason. Entertainment and sports both technically do operate year round behind the scenes, but performers in both industries have a hiatus or offseason and do not work 52 weeks out of the year.

One person who feels that WWE could benefit from an offseason is Roman Reigns. Reigns, who just announced he is in remission for leukemia, was interviewed by Talksport and revealed that an offseason could be beneficial for both the superstars physically and the writing team creatively.

“We do it the way we do it, and I’m never opposed to trying something new. This formula has worked and sports entertainment is a ‘What have you done for me lately’ industry. Unfortunately, we don’t have an offseason like most sports or other kinds of forms of entertainment or competition but, you know, I think if we could make it work, it would give a great benefit to our performers and our fans as well. It would definitely give our performers another couple of months if not a full quarter to rest and recover, not only just from a physical standpoint, but creatively.”

“When you go year-round, we’re always trying to evolve, trying to grow as far as our stories and our character goes and when you’re doing it over and over and over it can be tough. I think that’s what makes WWE and its superstars so tough and it’s an accomplishment to get to where we are. Only we can handle this and we’ve proved it, so it’s just a part of the gig. I don’t think it’s something that shouldn’t be looked into, but if the schedule stays the same I’m gonna be the guy that’ll run it.”

Reigns has a good thought behind this idea. He’s correct in that giving performers and writers an offseason would potentially result in a better produc, but is that realistic in WWE? For one thing, Fox just paid over a billion dollars for the rights to SmackDown and NBCUniversal paid a similar amount in renewing their rights deal for Raw. Both companies are paying top dollar expecting weekly content all year, and given these massive investments, they aren’t going to want to show less wrestling. Despite lower ratings and lower quality, NBCUniversal got Raw to go to three hours and paid for that extra hour, so they won’t want to cut back.

There is one idea that could work, at least for the superstars. Instead of everyone having an offseason at the same time, WWE can stagger it in one of two ways. One way would be to give those on the WWE roster three months off at some point between April and January, and during that time, NXT shows air on TV in place of Raw and SmackDown. The stars may not be as known in the mainstream, and there is a risk of stripping away what makes NXT so great (and arguably better than Raw and SmackDown), but it is weekly content. NXT would then have their offseason during another three month span, before or after WWE’s offseason.

The second way would be to not give everyone an offseason at the same time, but give certain people a three month break at some point in the year where it’s appropriate. This way, fans won’t feel deprived without WWE content for three months and storylines might actually be fresh.

For example, when Baron Corbin’s run as Raw constable ended, the best thing for his character was to take some time off and then come back in a new storyline. Instead, fans have been tired of him and boo him, not because he’s a heel, but because people want him to go away. WWE feels like he’s getting over, because he’s on multiple Raw segments (which are the same segments) each week. After a big storyline, it may make sense for someone to take a bit of time off to cool down and plan their next storyline with the creative team before coming back and maybe getting a better reaction from the fans.

WWE has a loaded roster with so many talented people trying to get on the show. Giving part of the roster a three month break at various times will provide more opportunities and force WWE to come up with new storylines and new matches. At this point, I can already write half of an episode of Raw just by repeating what goes on every week. From Finn Bálor/Bobby Lashley and Dean Ambrose/Drew McIntyre matches, to Ruby Riott losing to everyone, to Elias doing a weekly heel/face change and either getting cheap heat or cheap praise by playing to the city he’s in, to those stupid random runway walks Lacey Evans does every show that gets no reaction from the crowd, half the episode is just recycled segments from previous episodes and awkwardly placed commercial breaks. Maybe if some of these people had a break to regroup and either attempt something different with their character or give fans a chance to not act like they’re watching the same episode each week, Dean Ambrose might have wanted to stay in the company.