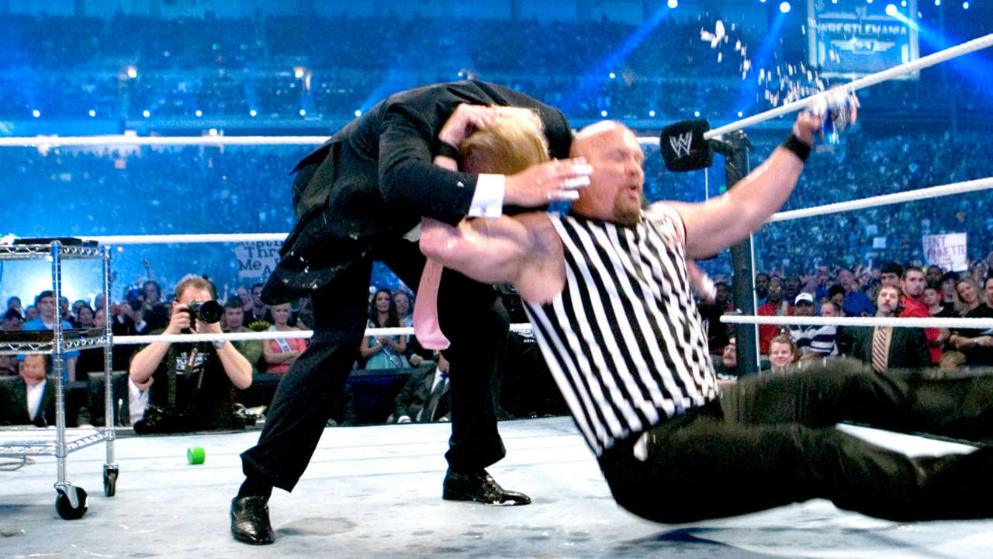 Ten years ago, I don’t think anyone at that time would have believed that Donald Trump would become President of the United States after receiving a Stone Cold Stunner at WrestleMania 23.

To try and increase interest and PR outside of pro wrestling circles, WWE owner Vince McMahon got President Donald Trump to be involved in a storyline rivalry between the two billionaires in 2007.

This storyline though culminated in a “Hair vs. Hair” match at WWE’s most popular event of the year WrestleMania. Because Trump wasn’t a professional wrestler, both he and McMahon chose a WWE superstar to represent them and whoever lost, had to shave their head. Because WWE matches have predetermined results and Donald Trump seems to love his hair more than certain members of his family, obviously Trump’s rep Bobby Lashley defeated McMahon’s rep Umanga.

WWE Hall of Famer Stone Cold Steve Austin was also incorporated into the story as a special guest referee. Austin’s wrestling persona, a redneck who questions authority figures, didn’t much care for either billionaire so he fit well in being the referee of a match like this. Before the match, McMahon came up with an idea to get Trump to take Stone Cold’s signature finisher, the Stone Cold Stunner, after the match. To hear Stone Cold talk, it didn’t take much to convince Trump.

“Vince says to me, ‘Steve, I’m going to see if I can get Donald to take the Stunner,’” Austin recalls, referring to his signature finishing move, where he kicks an opponent in the gut then performs a sit-down jawbreaker. “I said, ‘you think?’ He says, ‘Oh yeah, it’ll be great, it’ll be great.’ He goes up to Donald and says, ‘Hey Donald, this is Stone Cold Steve Austin.’ I shook Donald’s hand. He goes, ‘Listen, I want to know if after the match, when everything is done, if Steve could hit the Stone Cold Stunner on you.’ Donald says, ‘You think it’d be a good thing?’ and Vince goes, ‘Oh, of course it would be. It would just blow the roof off the place.’ And Donald’s right hand guy was saying, ‘No, no, no! You don’t need to do this, we got other things to do!’ He’s trying to talk him out of it. And Donald says to Vince, ‘You think it’ll help?’ and Vince goes, ‘I promise you it’ll help.’ And Donald says, ‘Okay, I’ll do it.’

As you can see, Trump shows how he’s clearly not a professional wrestler because that Stunner was a massive mess.

Two years later, Trump “bought” WWE in a separate storyline. The day after the “announcement,” WWE stock went down 7% and after some investors and media believed it to be true and Trump was the new owner, WWE and USA Network had to issue a release saying that it was part of a storyline and McMahon still owned WWE. Democrats, as well as some Republicans probably wished Trump was owning WWE instead of taking the oath to become President of the United States.