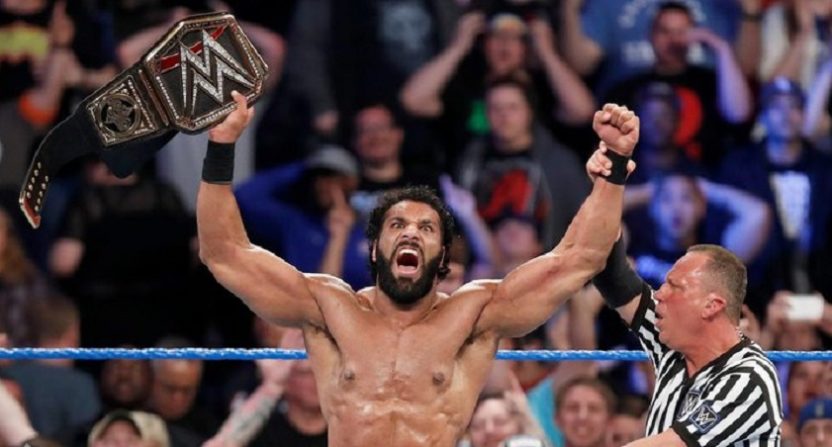 It’s easy to fall into traps as a WWE fan.

So many people appreciate pro wrestling via a two-pronged structure. On one hand, you root for the characters you like, cheering their victories and mourning their losses. On the other hand, you root for the performer, noting their work-rate and assigning a value to the acclaim they deserve based on how they got here and what they’ve done.

So while you might cheer on the character Sami Zayn because he’s this plucky, never-give-up, good guy who you can’t help but root for, you might also cheer for him because you appreciate performer Rami Sebei, who worked his way up through the indies and persevered in spite of his size to become a world-class professional wrestler who deserves accolades as one of the industry’s best. The former allows you to take your time as the character navigates the choppy waters of the WWE as an underdog. The latter means you have expectations in your mind about what his current career should look like and what title he should already hold.

That Sami Zayn is in the midst of a “scrappy underdog who doesn’t win (with exceptions)” run is perfect for the former and painful for the latter. A character like Sami, much like Daniel Bryan before him, needs to be put through the ringer for an extended period so that his eventual rise to glory is all the sweeter. But that doesn’t appease the notion you have in this moment that he deserves better.

As William Munny told Little Bill in Unforgiven, “deserve’s got nothing to do with it.” No one deserves anything in professional wrestling. You simply get what the story gives you.

To say that Jinder Mahal’s rise to WWE champion has been meteoric might be an insult to meteors. A jobber for nearly his entire WWE career (with a lifetime WWE record of 80-368, according to the Internet Wrestling Database), Mahal was shipped from Raw to Smackdown after Wrestlemania and immediately became a title contender. He wasn’t repackaged so much as he was heightened. The Canadian played up his Indian Sikh heritage and became a classic example of the foreign heel who hates Americans. Just like that, he was the No. 1 contender to Randy Orton’s WWE Title and a few short weeks later, he became arguably the most surprising WWE Champion in history.

The WWE wisely played up the shocked faces of onlookers in the crowd. It’s a rare thing to surprise pro wrestling fans these days and while the company gave us plenty of signs that they might elevate The Modern Day Maharaja to one of their top spots, few believed they’d have the guts to really go for it. Sure, the WWE’s expanded efforts into India and Asia play a part in the move. But deciding who to give the top belt to has always been a business decision, whether it’s rewarding the top merchandise seller or rewarding a fan favorite.

For many, however, the move was sacrilege. A breakdown in the sacred bond between dedicated fan and publicly-traded corporation. How in the hell could a guy like Jinder Mahal become WWE Champion when guys like Sami Zayn toil in the midcard?

If you really wondered whether or not giving the WWE Title to Mahal was a bad idea, all you had to do was log on to the internet the next day. Every website that tangentially covers wrestling, and even some that don’t, wrote something about Mahal’s rise to power and “what it all means.” From Deadspin and The Ringer to Rolling Stone, the buzz over the surprise win was palpable. Furthermore, most articles either saw the logic behind the move or outright praised it.

For those who don’t see the logic, you’re probably one of those people who don’t think Jinder “deserves” it. And that, right there, is the entire reason he’s the champion right now. Because in giving him the title, via shenanigans courtesy of the Singh Brothers, the WWE has given you your perfect heel.

Setting aside the jingoistic issues that come with having a brown-skinned man from “elsewhere” berating Americans over their privilege in the midst of the Trump Presidency, the WWE might as well have grown Mahal in a lab to fit their means (and many have pondered just that given his, um, transformation). In an era where fans often cheer for the heels, especially when it’s someone like Kevin Owens or Seth Rollins, guys who “paid their dues” as indie darlings, it’s become increasingly impossible for the company to find legitimate heels that fans want to boo un-ironically. Mahal gives them that rarest of gems.

Because he “doesn’t deserve it” and because in the eyes of many WWE fans, he’s breaking some sort of unwritten code about how one works their way up to becoming champion, Mahal enters the arena with the kind of heat that most bad guys dream of. Used to be you had to work hard to be that hated. You had to injure Hulk Hogan or have sex with the corpse of Kane’s dead girlfriend (don’t ask).

All Jinder Mahal has to do is be himself and he’s going to be booed out of the building. It’s perfect. Especially when you compare that to the guy he beat for the title. Randy Orton, who looks the part just as much as Mahal, sucks the energy out of the room when he enters it. For all his physical attributes, Orton has little charisma and elicits little reaction from the crowd. He’s a big name who has “earned” the right to be WWE Champion, but the reaction Mahal will get when he trots down the ramp on Smackdown will dwarf that of his predecessor.

If anything, the WWE would be wise to keep playing up the “deserve” aspect of Mahal’s reign. Whoever he faces next, be it a rematch with Orton or a new feud with AJ Styles or whomever, that person could have the entire crowd behind him if they started rattling off the reasons Mahal didn’t deserve to be champion. Call out his record. Call out all the times he jobbed out. Call out how little else he’s accomplished. And it would serve Jinder as well, filling his rhetoric with more vitriol. It’s a feeling he could probably tap into very easily given how overlooked he was most of his career.

Even better, can you imagine if the WWE decided to elevate Sami Zayn to be Mahal’s next opponent and Jinder beating him in the middle of the ring? Mahal hoists the title over a prone Zayn to thousands of booing fans. You’re talking nuclear heat.

The reaction Mahal gets also reminds us just how strange the WWE’s handling of Roman Reigns remains. The only other superstar on the roster that causes as much consternation as Mahal is Reigns, the purported face of the company. For various reasons outlined in many other places, Reigns and Mahal actually share a similarity in the notion that neither of them “deserve” the push they’ve been given. In Reigns’ case, it’s confusing because the WWE knows fans are booing him and yet continued to book him as a conquering hero (no matter what they say about how they like fans booing). In Mahal’s case, it’s a taste of what they could create if they did let Reigns go heel. For all the heat Jinder creates, Reigns could probably create 10 times as much in the same role.

There’s a decent chance Mahal won’t hold the title for too long. John Cena will be back at some point to defend the honor of America. Kevin Owens is having a field day promoting himself as The Face of America. AJ Styles is the best wrestler on the planet. And Shinsuke Nakamura will hold the WWE Title sooner than later. But in the meantime, if you’re going to put the belt on a heel, you probably couldn’t do better than Jinder right now. A large section of the fanbase wants to boo him and with what they feel are legitimate reasons.

They’re right, in a sense, that Mahal doesn’t deserve the position that he’s in. But that’s exactly why he’s perfect for the role.