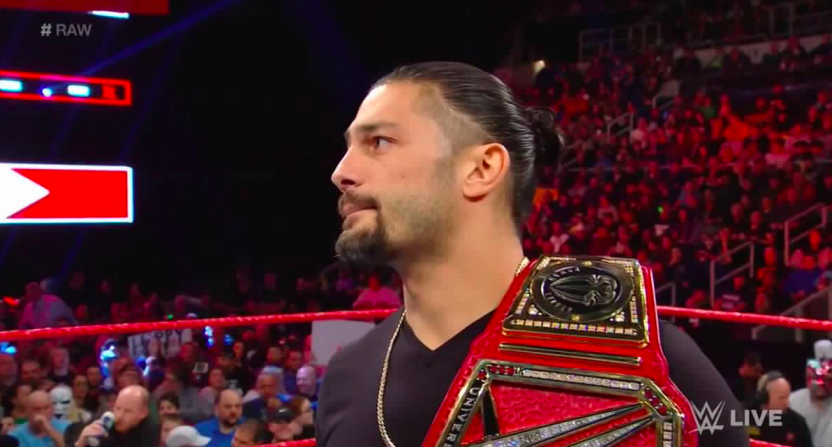 The WWE dropped a legitimate bombshell on Monday night when WWE Universal Champion Roman Reigns announced that he is battled leukemia and will be taking a leave of absence from the company in order to treat it.

Reigns also revealed that he’s had leukemia for 11 years, though it had been in remission since 2008. Reigns, whose real name is Joe Anoa’i, made the announcement in the middle of the WWE ring during Monday Night Raw.

The WWE also released an announcement shortly after, reiterating Reigns’ plans to step away from the company and make his battle public in order to help raise awareness to the disease and research to create a cure.

In show storyline terms, that means Reigns will be relinquishing the Universal Championship, which he won August 19 at SummerSlam after defeating Brock Lesnar. After handing off the title, Reigns walked up the ramp and was greeted by Dean Ambrose and Seth Rollins, his Shield teammates and friends, where the trio shared an embrace.

Very emotional start to #Raw with Roman Reigns announcing he has leukemia and needs to obviously step away from wrestling. He gave a great speech, the fans chanted his name and supported him. He gave up the Universal Title. Then he got a hug from his Shield brothers. God bless. pic.twitter.com/5rCwBqrVCJ

It was a very real and emotional moment for the WWE and arguably its top superstar. Reigns has so often been booed by fans, who saw his character as one that was anointed by the company, compared to “fan favorites” such as Daniel Bryan or Braun Strowman. Reigns was often the subject of thinkpieces about his place in the company and status as a “face,” though recently his work rate and the quality of his in-ring ability seemed to win over many of his early detractors. His recent Universal Championship victory was seen as the completion of a long push to the top of the company and the sky appeared to be the limit. Sadly it looks like that next great story will have to wait.

Reigns made it clear that he does not see this as a retirement. “I will beat this, I will be back, and you will see me very, very soon,” he said. Despite what they might have sounded like when Roman Reigns entered the arena, many WWE fans will agree with that statement.