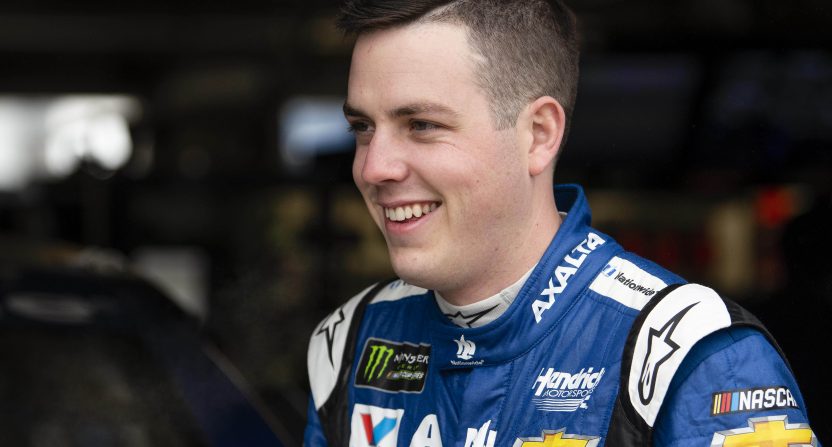 Alex Bowman entered 2018 taking over for a legend. But if you thought that would overwhelm this driver, think again. When Dale Earnhardt Jr. was forced to sit out due to suffering a concussion, Jeff Gordon and Alex Bowman split time in the car. Before 2016, Bowman had been trying to remain in the sport, picking up rides with smaller and lower funded teams looking for a break.

Racing for such teams like BK Racing and Tommy Baldwin Racing, Bowman wasn’t exactly expected to do any good. With those teams, survival is the name of the game and there’s only so much they could do with a lack of funding and older equipment compared to the top teams of the sport.

One person who was impressed with Bowman was Dale Earnhardt Jr. And if you want to have anyone in your corner in the NASCAR world, Dale Jr. is probably the best person to have. Bowman has been the driver who Dale Jr. has wanted in the #88 when he needed a replacement and when he was looking for someone to take over the car in retirement.

Now, Bowman is driving one of the more iconic cars in modern NASCAR and is with one of the more legendary teams of the sport. There certainly seemed like times where others would have given up on their dreams but Bowman persevered. And while he is still wants to keep proving himself, Alex Bowman has certainly been rewarded for all his hard work.

The Comeback talked to Alex Bowman about the beginning of his first full season in the #88. We talked to Bowman over the phone before the Daytona 500 after he won pole and talked to him in person this past weekend in Dover to compare and contrast his perspective of this 2018 season.

(Interview from Daytona in February)

Phillip Bupp: You’re driving the #88 this season and [sarcastically] I’m not sure if anyone told you, it was Dale Jr’s car. How instrumental has Dale Jr. been to your development both as being in the #88 full-time as well as taking over when Dale had to sit out due to concussions?

Alex Bowman: Dale’s been a big part of my career. I’m definitely very thankful for his friendship and advice and help and everything he’s done for me. Hopefully he’ll continue to be a big part of the team; he brings a lot to the table, a lot of knowledge so I’m definitely leaning on him all I can and I’m thankful to have him there to lean on.

PB: You’re taking a rather different path to where you are now than most drivers. You weren’t in the Monster Energy NASCAR Cup Series last year, took over for Dale for 10 races in 2016 and before that was racing full-time with BK Racing. Do you see yourself this year as a rookie or see yourself as a veteran since despite not racing MENCS in 2017, you have had years of top-level experience?

AB: I have a good bit of experience to lean on. I don’t know if you can call me a veteran or not but I’m definitely not a rookie. That experience I have is going to be helpful. I think it makes me a better race car driver and driving for the smaller teams only helped me. Hopefully I can continue to use that to my advantage.

PB: And going off of last year, you had the occasional Xfinity or Truck race but what was the feeling like that you weren’t racing in NASCAR as often as in previous years and how did you pass that time in between?

AB: It was definitely nerve wracking for a while. I was pretty nervous on how I was going to run getting back in the car. But going to Charlotte and winning kinda helped that out a good bit. Didn’t do a whole lot of stuff during that time, just worked on the Chili Bowl car and hung out with my friends quite a bit. So I just tried to enjoy the off time that I had and have as much fun as I could.

PB: A lot of Dale Jr. fans are looking for a new driver to root for. What would you say to Dale Jr.’s fans who are now looking for a new favorite driver to think to themselves, “I don’t need to look elsewhere, I’ll stick with the 88 and root for Alex Bowman.”

AB: Well I think I can say more on the racetrack than I can say verbally. I’m a regular guy living the dream of being a race car driver. I’m not afraid to get my hands dirty and work on my own stuff. I’m a car guy. I really love dogs. Hopefully, we’ll give them something to cheer for. We’re going to do our best to get that #88 up to the front and at the end of the day, it’s all about giving them something to cheer for.

(Interview from Dover in May)

PB: Now that we’re almost a third of the season in, how has your season been so far?

AB: I wish it had been a little bit better so far. Kinda started the year a little off where we want and expect to be but we’ve gotten better each and every week which is a big positive for us. The past five weeks have had ups and downs. I feel like if we just kind of smooth everything out, we’re pretty decent right now.

PB: What grade would you give yourself?

AB: C+, B-. I mean, we started pretty far off of where we need to be but we’re heading in the right direction. Everybody here has been working very hard and our race cars have gotten quite a bit better each and every week so that’s good.

PB: My observation has been that you don’t tear up equipment. You can keep yourself in contention and when something happens, it’s usually been none of your doing. And like you said, your team has been better with a top five at Bristol, got through everything at Talladega and finished in the top ten. You’ve alluded to it, seeing the team getting better each race.

AB: Yeah, for sure. I think we kind of realized in the beginning of the year that we needed to finish races and kind of take what we could get. Not put ourselves in a hole with the points and I feel like we’ve done a pretty good job of doing that with the exception of Texas. The last four weeks, we’ve had some speed. Richmond was a big struggle for us but other than that I think we’ve been pretty good. Lot of new guys on this team and they’ve been meshing very well and working well together which is good as well.

PB: Right now (before Dover), you’re 12th in points, 13th in the Playoffs. You’re the top Hendrick driver in the points. It’s a decent spot but you’re still somewhat vulnerable without a win but with plenty of races left. Are you seeing the pressure build right now that you need to get a win to get into the Playoffs or is there still too many races?

AB: Yeah, I think there’s still too many races to really say. I don’t know, it’s hard to say. I mean, if the #18 and the #4 keep winning a bunch of races, there’s going to be a lot of guys who will point their way in. So we’ll just have to wait and see. Obviously a lot can change. I think we’re going to continue to get better, continue to improve. Definitely need to win soon but I think we’re heading in that direction.

PB: Of the remaining races in the regular season, where do you think you have the best chance of winning?

AB: That’s a tough question. I feel like Dover’s a really good place for Hendrick Motorsports. Jimmie’s obviously been really, really strong here throughout the years. I’m going to be leaning on him. I feel like every week we go to the racetrack, we have a shot at it so it’s hard to pick just one. (Bowman finished 23rd at Dover after having to start from the rear due to failing pre-race inspection three times)

PB: Specifically, Dover is going to have some difficulties this weekend. You’re practicing and qualifying on Friday in 90 degree weather, race time it’s going to be 60s and [potentially] raining. I know it comes with the territory sometimes, but how difficult is that when you’re setting up in one set of weather conditions when you’re going to be racing in completely different conditions?

AB: Yeah, I think Dover is pretty predictable in what it’s going to do which is a good thing for us in that so I think Greg’s [Ives] notebook is going to come in handy there. It’s really hard to say what the weather is going to be like. This morning, NASCAR moved everything up [Saturday] because they thought it was going to rain and now there’s a zero percent chance all day. So it’s hard to say exactly what it will or won’t do and we’ll just have to wait and see on Sunday.

PB: And you have three other teammates too so you can kinda bounce things off of the others.

AB: Absolutely. All of them seem to run really well here. This is probably Chase’s best track. Definitely one of Jimmie’s better tracks. William has been successful here in the past so I think all of us like this place and it’s definitely been a great place for each of us.

PB: Now we talked at Daytona on Media Day and you said your goal for this year was to compete for wins and championships. I’m assuming that’s still the goal?

AB: Absolutely, we gotta get to that point. I wish, like I said, I felt like we would’ve been more competitive to start the year. We’re getting there, just kinda gotta get our hands around this new car and go from there. It’s gotten better every week, which is all that you could really ask for but we still have a little ways to go.