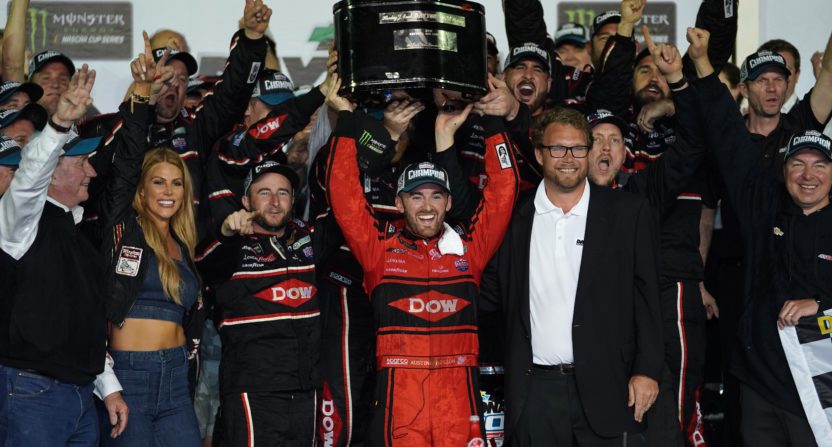 Any time someone gets a job at a family company, many immediately believe it was due to nepotism. For Austin Dillon, who drives for his grandfather Richard Childress, some people had those similar thoughts. But those people will likely shut up because Austin Dillon just won the 60th annual Daytona 500.

Dillon was never really up front at all. In fact, Dillon only really led the final two turns. But in a race that had many crashes and very few cars on the lead lap, Dillon got through it all first and did so by avoiding the many pitfalls that others couldn’t.

While the final lap ended with Dillon crashing Aric Almirola, neither had a problem with how things went down. And quite honestly, what happened was a symptom of restrictor plate racing in general.

This win by Dillon has put things in full circle. February 18 is a date that has significance with Richard Childress, Dale Earnhardt and Austin Dillon. It was on that date in 1979 where Earnhardt made his first Daytona 500 start.

In 1998, Earnhardt and car owner Richard Childress finally won the race that eluded them for so many years. Dillon was actually in Victory Lane as a seven-year-old, for Earnhardt’s win.

It was sadly on this date in 2001 that Earnhardt lost his life in the Daytona 500 and Childress didn’t know if he was going to keep his team intact. When he did, Childress didn’t use the #3 out of respect to the legend. When Dillon came through NASCAR, he wanted to drive that same number and after a decade-plus of non-use, Childress allowed that.

A move like that certainly added more pressure for Dillon. First, getting on a team run by his grandfather and now getting Dale Earnhardt’s famous number, Dillon had some doubters. Even when he won the Coca-Cola 600, and made the Playoffs, those doubters simply said that he won due to fuel mileage. They weren’t wrong, but fuel mileage is a skill unto itself and Dillon still won.

So now, after all that, and even after getting his car thrown into the Daytona catch fence once, Austin Dillon won the Daytona 500 on February 18. With two career wins in two of the Crown Jewels of NASCAR, it’s clear Austin Dillon got there with his own skill and is clearly a worthy successor to the #3.