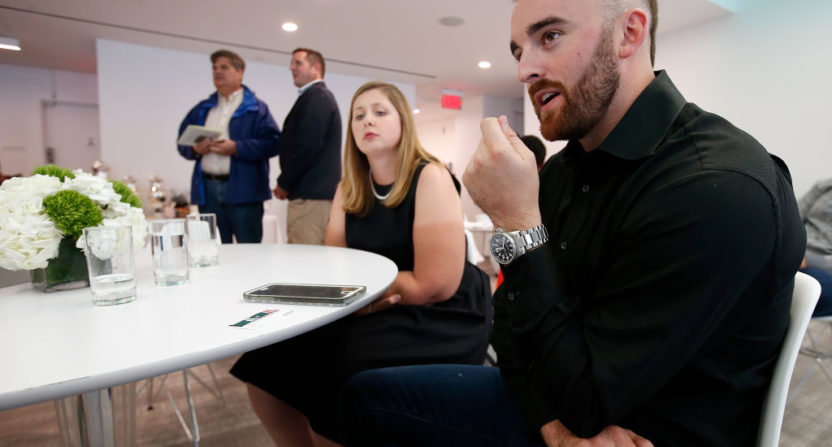 This week is NASCAR Week at The Comeback where we will post an interview per day as we celebrate the start of the NASCAR Playoffs. Click to read our interviews with Kevin Harvick, Kyle Larson and Kyle Busch. On Friday, we will have an interview with Brad Keselowski.

Austin Dillon grew up in a NASCAR racing family. The brother of Ty, the son of Mark (who raced in the Xfinity series in the late 90s) and the grandson of Hall of Fame car owner Richard Childress, Austin’s path seemed destined. Throughout his life, he would wear #3 because that was the number his grandfather had and when what number wasn’t used in the years following Dale Earnhardt’s death, it was Dillon who wanted that number because his grandfather had that number.

But in addition to following in his grandfather’s legacy, Dillon knew he was going to be following in Dale Sr’s legacy. If anyone thought that brought on some pressure, it sure didn’t faze Dillon. In its first appearance in the Monster Energy NASCAR Cup Series since 2001, Dillon put the #3 on the pole for the Daytona 500 in 2014.

In 2016, Dillon advanced to the NASCAR Playoffs for the first time and while it wasn’t exactly the best postseason, Dillon had career highs in poles, top fives and top 10s. The only thing that was missing was a win.

Dillon got that win in 2017 and did it at one of the most prestigious races in NASCAR, the Coca-Cola 600. It takes a special kind of driver and car to be able to outlast 600 miles in the southern heat of Memorial Day weekend but Dillon took the opportunity to gamble on fuel and stretched his tank to the extreme to win one of the crown jewel events.

I sat down with Dillon as we talked about the upcoming playoffs, his own legacy as well as his love of fantasy football.

Phillip Bupp: You have competed for both the Daytona 500 and the Monster Energy NASCAR Cup Series championship. Which one is tougher to win?

Austin Dillon: Definitely a championship. The way it’s shaped up the last couple years, you gotta win the race to be the champion. So that’s a difficult racetrack to win at, Homestead is, and you gotta get there too. So everything has to really align and the stars have to play out right. You gotta be the best guy and the best guy wins the championship. That’s how you want it to be when it comes to the playoffs.

PB: In this situation, you cannot pick your teammate (Ryan Newman). If you don’t win the MENCS championship, who would you most want to see win the championship among the other playoff drivers?

AD: Wow, this is a tough question here. I’m going to go with the most political correct answer with a guy in my seat because I don’t want to give it to anybody else but I’m going to go ahead and say Jimmie Johnson because I would get to race with the greatest of all-time if he gets his eighth. If anybody, it’d be him. Because he’s already got so many, I don’t want anybody else to get it before I do. [laughter]

AD: I think you want the best. I think Kevin Harvick, Jimmie [Johnson] and Kyle Busch. Those three would be pretty awesome to be in the championship with.

PB: Being in such a legendary number as the #3, what would winning the championship in the #3 do to your own legacy?

AD: I mean, it would make me the first guy to win all three championships in NASCAR so it’d be great for that and think I could hang my hat on that for the rest of my career so anytime you go down as a Cup champion, it’s, you don’t have to speak much anymore.

AD: Okay, so I can answer one question right off the bat, and that I was happy to draft Kareem Hunt and he’s paid off for me really well. I took him in the second round of my favorite league, actually I’m the Commissioner of that league so it’s my favorite, I’m in seven leagues. And I think, not my biggest disappointment, I was happy to take Mike Evans but the hurricane kind of ruined that in my league because he didn’t get to play. I have most of my teams are kind of similarly set up, I just have different combinations but hoping Mike Evans has a solid year and Kareem Hunt was obviously a steal so that was good.

AD: Oh man, after my sponsors. It’s a tough one. It’s a combination, I’m getting married in December so it’d be my wife and my grandfather. My grandfather has obviously given me this opportunity and without him, I wouldn’t have the opportunity to win a championship.