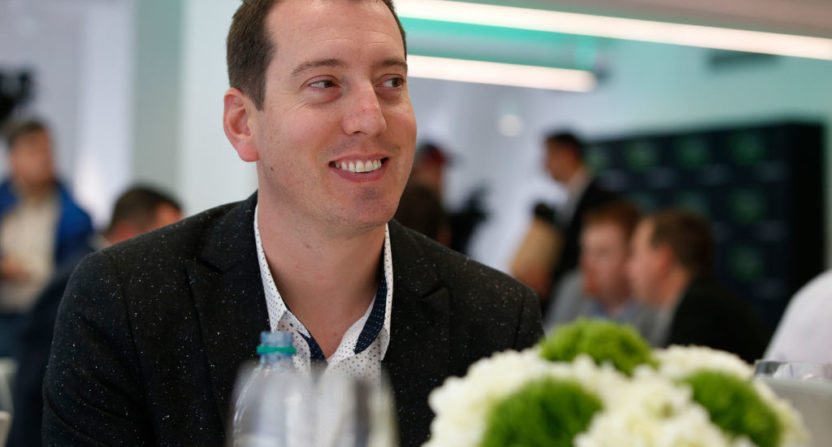 This week is NASCAR Week at The Comeback where we will post an interview per day as we celebrate the start of the NASCAR Playoffs. Click to read our interviews with Kevin Harvick and Kyle Larson. Later this week, we will have interviews with Austin Dillon and Brad Keselowski.

Kyle Busch may have his lovers and his haters, but even his haters have to admit that Kyle Busch is one of the best.

The younger brother of Kurt Busch broke onto the scene but wasted little time in letting the NASCAR world know that he was more than Kurt’s brother. Busch started full-time in the Monster Energy NASCAR Cup Series in 2005 and immediately took to the top series, winning twice in his rookie season. But it was when he went to Joe Gibbs Racing and Toyota when Busch really broke out onto the scene.

Once with Gibbs, Busch made Victory Lane like a second home as he won eight races in 2008. Busch followed that up with multiple win seasons over the next five years and became a consistent threat for the championship even though for one reason or another, would fall short by the end of the season.

Everything came together for Busch in 2015 but it sure didn’t come easy. In the first Xfinity race of the season at Daytona, Busch got caught up in the “big one” and somehow found a part of the track that didn’t have a SAFER barrier. Hitting the wall head on, Busch broke his his right leg and left foot in the crash and for the first time, there were unknowns about whether his racing career would be the same.

Because of NASCAR’s playoff system, Busch was able to receive a “medical waiver” that allowed him to miss races and still be eligible to compete for a championship. That didn’t mean NASCAR let him in, he still had to win a race and finish in the top 30 in points, but when he came back in May, Busch was on a mission to get that.

About a month and a half after coming back from injury, Busch won at Sonoma and after reeling off three wins in a row, including the Brickyard 400, Busch got back into the top 30 in points before the regular season ended and got back into the playoffs. Now, as the points reset and he had four wins, Busch was leading the points and the race was on. It wasn’t a flawless playoff run but he survived and advanced in every round. And when the series came to Homestead for the championship finale, that trophy was Kyle’s and everyone else was running for second place.

This season, Busch experienced a bit of a slump but let’s be honest, Kyle Busch’s slump would be a great stretch for most people. Yeah, Busch had some great finishes since his 2016 Brickyard 400 win, but Busch started this season winless since then and he wasn’t getting into Victory Lane in the Monster Energy NASCAR Cup Series earlier this year.

Just over a calendar year after his last win, Busch finally won at Pocono and things seemed right in Busch’s world. Busch never gave the impression of taking winning for granted but after being in his pit when he finally snapped his worst winless drought since his rookie year, there were a lot of people who breathed a huge sigh of relief.

I was in @KyleBusch's @JoeGibbsRacing pit for the final laps. Lot of people @mmschocolate there and everyone was nervous until the finish. pic.twitter.com/YJhmcHA2Mo

Now, the rest of the series is on notice. Another win at Bristol set Kyle Busch back to being one of the big contenders for the championship and will definitely be a force to be reckoned with the rest of this season.

I sat down with Busch as we talked about the MENCS championship, his driving style and how he doesn’t seem to have as many haters when interacting in person.

Phillip Bupp: You’ve been fortunate enough to win a Monster Energy NASCAR Cup Series championship and you competed in the Daytona 500. Which one is tougher to win?

Kyle Busch: Oh man, I would say the Daytona 500 is tougher to win because it’s more circumstantial, it’s more luck. It’s 30, 38 different guys trying to go out there and race for a win in that race where when you’re in a championship situation, you know you’re only racing eight, nine, ten guys maybe who are a legitimate threat to be able to win the championship. And it’s over a course of multiple races and those races aren’t restrictor plate races so you have a chance of having a fate of your own destiny.

PB: In this situation, you cannot pick your teammates (Denny Hamlin and Matt Kenseth). If you don’t win the MENCS championship, who would you most want to see win the championship among the other playoff drivers?

KB: I’d say Martin Truex Jr. I think he’s been around for a long time and their team is so good right now. They’re a Toyota team, they’re very deserving of it so obviously I think I would have to choose Martin.

PB: You started in NASCAR as young, single, no kids. Now…

PB: Have you noticed your driving style change now that you’ve been in the series for a while and you have a family?

KB: I would say I’ve gotten a little bit calmer and a little bit, not more reserved but, patient and being able to focus on what’s important and not what’s not important. So I think those are the main key things. I think I don’t get riled up, I still get riled up, but I don’t get riled up as easy or as much and so it gives you that opportunity to have that calm demeanor and that more focused demeanor throughout an entire race.

PB: Now you’re known for being the driver who fans either love or who fans love to hate. Where many drivers try to go down the middle and try to appease everyone, you do your own thing and if some people don’t like it, that’s their problem.

PB: And when it comes to social media, some people tend to have “extra courage” being anonymous and behind a computer and just be critical. Have you had anyone be critical to you in person or have fans reacted positively?

KB: Yeah — no, I’ve never had anybody to my face say anything that’s been what they would say behind a computer screen. You know, I’ve had people say, like I’m signing autographs for a row of people or something like that leaving a race track and when I’m finished signing for that row of people, somebody that I’ve already signed for or that I missed because they didn’t want anything might have a smart-ass comment. But other than that, I’ve never had anybody that’s come up to me.

KB: Oh man, obviously the smartest one would be the good Lord for getting you there and doing everything and looking out for you and watching over you. But past that, I would say my crew chief Adam Stevens, Joe Gibbs. There’s a lot of them that I’m going to have to run down the list of but those are the ones that first come to mind. And then of course my family too.