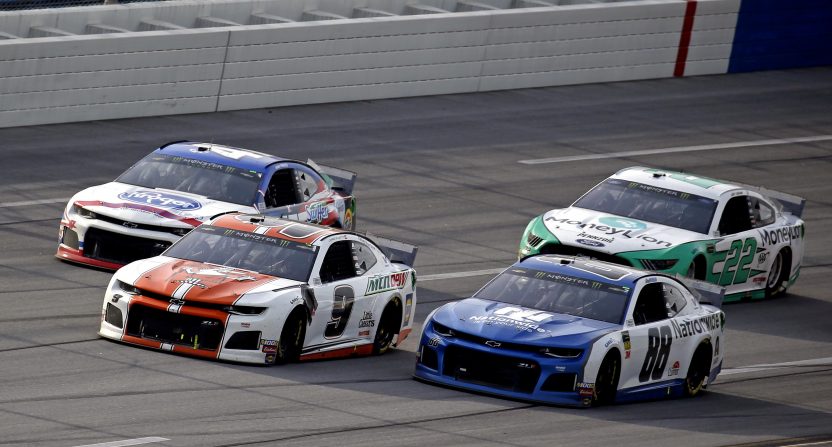 Chevrolet has been in a massive slump that hasn’t been seen in decades, probably since the dominance of Ford and Chrysler back in the late 60s. Since 2018, Chevrolet has been trailing Ford and Toyota by a sizable margin. In 2019, the Monster Energy NASCAR Cup Series has been dominated by Team Penske and Joe Gibbs Racing, who have won each of the first nine races this season.

For Chevrolet, Talladega couldn’t come at a better time. A superspeedway (formerly restrictor plate) race where the draft is most important, in addition to a new rules package that brought up a lot of unknowns as to the racing, just about any car can get up to the front if that driver puts himself in the right position and has the right combination of luck and aggression to remain in front. Knowing they couldn’t mess this up, Chevrolet needed to work together to not only be there at the end, but to be in a position to win. That’s just what they did when Chase Elliott led Chevy to a 1-2-3 finish with six cars in the top 10.

The GEICO 500 was a throwback race in that manufacturers seemed to work with each other and only worked against each other whenever that was possible. Chevrolet didn’t dominate the race (that would go to Ford, whose drivers led 94 of the race’s 188 laps), but Chevy did lead when they needed to.

Stage 1 was a preview of that, when Ty Dillon led a group of four, with Alex Bowman, brother Austin Dillon, and Elliott, to the line. Leaving the Fords and Toyotas to lead again, the Chevys came back by the end of Stage 2. Similar to Stage 1, it would be a Chevrolet 1-2-3, with Elliott leading Bowman and William Byron to win the stage and Chevy taking seven of the top eight positions.

While winning stages was nice, the final checkered flag would be Chevy’s biggest test. Biding their time, Team Chevy stayed within the top 10, but hadn’t made their move to the lead yet. Then with seven laps to go, a four-car wreck brought out the red flag and set up the final act for the 100th Cup race at Talladega.

On the final few laps, Elliott, Bowman, Ryan Preece, and Daniel Hemric marched to the front and put themselves in position for the win. As the race ended under caution on the final lap due to two separate crashes, which include a flipping Kyle Larson, Chase Elliott clinched himself the victory right before Bowman and Preece were able to make their move. Joey Logano got in the middle of the Chevy party to finish fourth, but the day would go to Elliott and the rest of Team Chevy, breaking the Penske and Gibbs dominance for one week at least.

RT TO CONGRATULATE CHASE ELLIOTT ON HIS WIN AT TALLADEGA SUPERSPEEDWAY! pic.twitter.com/6XahWJchiv

Does this mean Chevrolet is out of their slump and is back to their winning ways? I wouldn’t go that far. While this was a great win for them, Chevy is still a step behind the top Ford and Toyota teams and they don’t have the luxury of going to Daytona and Talladega every weekend. At the same time, even under fortunate circumstances, a win is always a great feeling and maybe it’s a start that will get them back on the right track. While Elliott won his first career Cup race at Watkins Glen last year, he also won at Dover and Kansas in the Playoffs. Like Talladega, winning on a road course doesn’t really translate to success at intermediate tracks but a winning mindset from the team can go a long way and this may be the start of an improved performance by the winningest manufacturer in the sport.