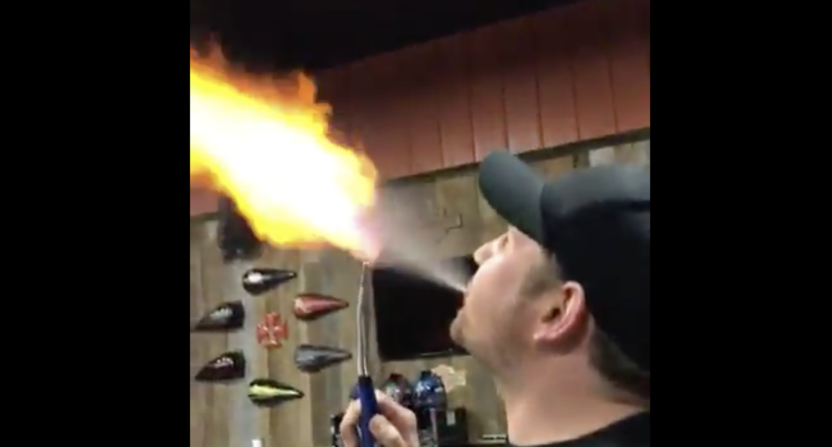 It took a weekend snow delay at Martinsville Speedway but nothing was going to deny Clint Bowyer from getting back into Victory Lane.

Bowyer lead 215 laps for his first win since 2012. In one of the most popular wins in recent years, everyone was happy to see Bowyer get back to the top spot for the first time in 190 races. And when you haven’t won in nearly six years, you tend to go all out in savoring this victory.

This would have to be picture of the day… Family is everything.. And kids are more than everything… That little dude will remember this day forever.. pic.twitter.com/skmEObqJrH

Cash was a little too young for the nighttime festivities so after celebrating with his family, Clint celebrated the win with his crew. And based on what they posted online, their party very much looked like it was six years in the making.

The beer was certainly flowing and when the party got back to Bowyer’s barn, things were literally lit with the pit crew.

Holla. We aren’t getting tattoos on our asses but we are doing this pic.twitter.com/ALKSfep9N7

Brett Griffin, Clint Bowyer’s spotter, is referring to Austin Dillon and his team winning this year’s Daytona 500 and celebrated by getting tattoos on their rear ends. Yeah, Bowyer’s crew didn’t get tattoos but breathing fire is no joke either. They also rode mechanical horses and were, in the words of Cal Naughton Jr., “gettin’ hammered drunk.”

Crew Chief Mike Bugarewicz was already feeling it last night and probably more than just his liver is hurting this morning.

No tattoos but definitely some permanent body damage. #myliverhatesme

All in all, it looked like some great fun and Bowyer’s team was probably fortunate there isn’t a race this weekend. Because that would have been one rough turnaround to win on Monday, celebrate and have to get the car ready for the next race.