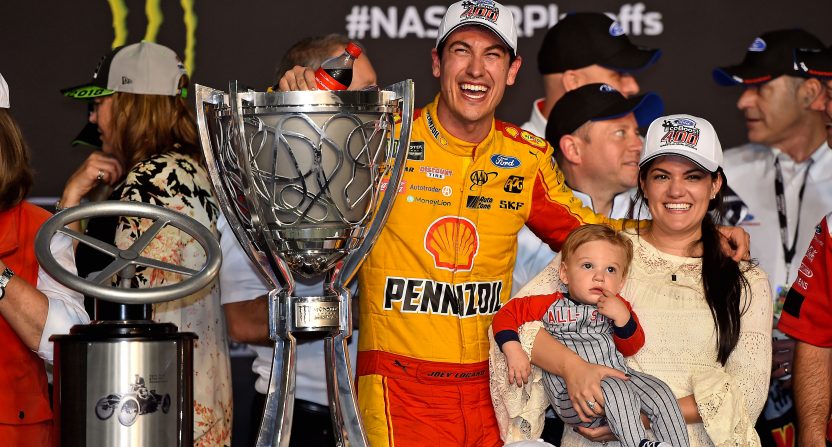 Despite having a career defining season, Joey Logano hasn’t let success go to his head. He entered NASCAR as an 18-year-old, and the New England racer quickly impressed legends like Mark Martin, who saw Logano race at age 12 and declared him as “the future of this sport.” Logano’s skill earned him the nickname “Sliced Bread,” which was either a blessing or a curse depending on how you looked at it.

With a nickname like that placed on him, Logano really had to step up. And even though the met those expectations with a Monster Energy NASCAR Cup Series championship, Logano was never really comfortable with Sliced Bread. Logano said, “I didn’t give myself that nickname. I still feel weird about it [laughter]. It’s just Joey.”

Logano entered the 2018 MENCS season in a bit of a slump. After finishing runner-up in 2016, 2017 ended up being Logano’s worst season with Team Penske. Logano got a win at Richmond, but that was “encumbered” due to his car failing a postrace inspection. Even so, the stats showed that Logano wasn’t really in playoff form, as he scored just 10 top 5s and 17 top 10s, both lows with Penske.

That all changed in 2018. Logano consistently rattled off top 10s at the start of the season, culminating with a win at Talladega in April. Now with a win under his belt, Logano could focus on going for wins and playoff points. That didn’t happen, but a runner-up finish at Darlington (to teammate Brad Keselowski) seemed to be the turning point to Logano’s season.

“Darlington…was the point that I felt like we really started to lead a lot of laps on a mile and a half and had the opportunity to win that race,” Logano told The Comeback. “We came up a little short that night but had the possibility to win that race.”

That wound up being the perfect time to get a season going. When the Playoffs started, Logano put out at least a top 5 in each of the first two rounds and finished no lower than 14th. That consistency put him through to the Round of 8. And then, when push came to shove and Logano needed a win to get to Homestead, he did a little bit of pushing on Martin Truex Jr. to win at Martinsville.

The finish left a sour taste in the mouths of Truex, crew chief Cole Pearn, and the others at Furniture Row Racing, leading a usually calm and measured Truex to remark that Logano “won the battle, but he didn’t win the damn war.”

Logano wound up winning “the damn war,” ironically needing to pass Truex to win the race and the championship. With much that was said publicly between Logano and Truex in the lead-up to Homestead, it appeared there was hatred among the two teams. But when the race ended and the title was decided, Logano got some very unexpected kudos for his achievement.

“Cole Pearn came up to us in Victory Lane in person,” Logano said. “And I was…surprised. I had a lot of respect for him in that moment because we never really communicated a whole bunch outside of some of the things that was said, back and forth, in the media [laughter] but he came walking up and I was surprised to see that. It’s a true test of character after a race like that to be able to shake someone’s hand.”

“I’m never good at it, I’ll be honest with you. I’m not a good loser in any way. And I’m sure he isn’t either but to have the control and the ability to go up to your competitor and say “Good job,” I respect that because I know how hard that is. I had to do it before and it’s, maybe the worst part of the whole night and I know that, so I thought that was an impressive thing to do.”

The championship was just one thing about Logano’s incredible 2018. Logano became a father in January of last year and won the 2018 Comcast Community Champion of the Year Award for his work with the Joey Logano Foundation. Logano’s foundation “provides aid to children and young adults during times of crisis offering them a second chance” in addition to “providing opportunities for children with serious illnesses to spend time at the race track and be part of the No. 22 race team.”

It may be tough to believe when someone claims winning a humanitarian award is as big as a championship in their day job, but Logano was honest and genuine when he said that he put this award next to his Cup title.

“That was, that award, I feel like is as big as winning the drivers championship,” Logano said. “Because I honestly feel like you can win a championship and not be a champion in a lot of different ways. But to be able to receive that, it’s not why you do it, you do it because you’re supposed to. But to be able to get recognized for that, it’s special because our sport does such a good job when it comes to, and we saw it with the Betty Jane France Humanitarian Award and we see with a lot of driver’s foundations, how generous our sport is as people and to be a part of that, to get an award is like I said, I don’t even know how to put that one into words. That one meant as much as anything to me.”

Now, it’s onto 2019 and Logano enters this season as a champion. Logano faces a bunch of new challenges, including a new rules package and a new car. Ford is going from the Fusion to the Mustang this year, and Logano’s first experience was pretty incredible.

“I did a really cool video with Vaughn Gittin Jr. and we drifted two Mustangs side-by-side,” Logano said. “Oh my goodness, that was probably the most fun I’ve ever had. We made a Cup car a drifting car and we had his drift car drifting next to us, it’s badass.”

Despite now being on top of the NASCAR mountain, Joey Logano is keeping himself grounded. The 28-year-old is on the path of surpassing one of the top stars of NASCAR, Kyle Busch. Both began their Cup careers at 18 and throughout their teens and 20s, Busch had 29 wins while Logano has 21 (Logano has until May 2020 to add to that). Busch leads Logano in top 5s (118 to 104), but Logano already leads Busch in top 10s (179 to 178) and already has both a Daytona 500 win and Cup title to his name. Busch won his Cup championship at age 30.

That kind of thing doesn’t really affect Logano. As long as his fans, his team, and his family are behind him, that’s what matters.

“What matters the most to me is the people I love the most, and what they think,” Logano said. “We have great fans and they have a lot of passion and I love that. And I have a lot of supporters who support me as a race car driver and as a person. And I guess if people don’t want to jump on the bandwagon, I’m okay with that too. I love that they have passion for the sport because I know, love me or hate me, they’re supporting the sport and I look at that as support for me in one way or another.”

The hype has never come from Joey Logano, it’s come from everyone around him. It wasn’t his choice, but Logano has overcome the notion of being the “best thing since sliced bread.” But win or lose, if he had it his way, he’d simply like to be called Joey.