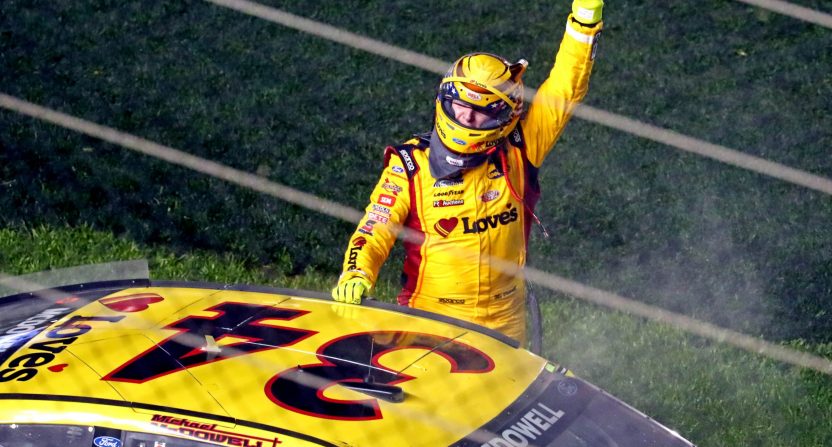 The Daytona 500 is “The Great American Race” for a reason and for one driver every year, a dream is realized. For Michael McDowell, he entered the race at 66/1 odds but despite those long odds, everyone has a chance. McDowell got through the crashes, which included a fiery one in the final lap, to win the Daytona 500. McDowell becomes the eighth driver to get his first career win in the Daytona 500.

Lightning and rain delayed the race after 15 laps but not before a massive crash that took out over a quarter of the field. The crash started on the way to Turn 3 as Kyle Busch and Christopher Bell got a massive run and pushed Aric Almirola. Bell hit Almirola on the right rear which is usually problematic. The second place Almirola was turned into Alex Bowman and that kicked off a 16 car crash.

In addition to the three previously mentioned, drivers such as Kurt Busch, Ryan Newman, Ryan Blaney, Martin Truex Jr., Matt DiBenedetto, William Byron were capable of winning and had their cars smashed up. Byron, Busch, Truex, Jamie McMurray and Tyler Reddick were able to continue after the red flag but were multiple laps down.

Multiple contenders are collected in this early accident in the #DAYTONA500. pic.twitter.com/qZro3YXsTj

.@NASCARONFOX takes a closer look at what caused this multi-car accident. #DAYTONA500 pic.twitter.com/sS8wJkt9La

After a 5:40:28 red flag period, the race got back underway. Other than Byron’s rear quarter panel flying off and blowing Quin Houff’s tire, the rest of Stage 1 was rather uneventful as Denny Hamlin led the final 35 laps of the stage. After Bell spun, Hamlin won Stage 2 despite a hard challenge from his driver Bubba Wallace.

On the final green flag pit stop, the keyword was “teamwork.” Ford had the numbers and when everyone pit, all but Austin Cindric left the pit together. That got them up to speed much faster so when the Toyota’s pit, they were strung out and were no match for the Ford’s.

So once Hamlin and Busch were weeded out, it was a battle among five Ford’s of Joey Logano, Kevin Harvick, Brad Keselowski, Cole Custer, and McDowell. Custer tried a bit too early and was sent to the back and Keselowski and McDowell teamed up to draft past Harvick. Then on the last lap, Logano led with his teammate Keselowski behind him. What happened next was a violent and fiery crash where the third place McDowell came out ahead.

Retweet to congratulate Michael McDowell on his #DAYTONA500 WIN after a huge crash coming to the finish!@Mc_Driver | @Team_FRM pic.twitter.com/lTsyYF7Gxq

Thankfully, everyone was okay but due to the fire and the sheer destruction of it all, NASCAR made the decision to throw the caution and end the race. McDowell was slightly ahead of Chase Elliott and Austin Dillon when the caution came out.

It would be easy to blame someone for the crash but that’s superspeedway racing, for better or worse. Joey Logano is supposed to block the people behind him, and that includes his teammate. Brad Keselowski is supposed to go for the opportunity to get the win, even if that means passing his teammate. And Michael McDowell has to push whoever he can to get in a position to win. That’s how it goes sometimes.

Obviously, this is a life changing moment for McDowell but it’s so much more for the 14-year vet. Originally driving for Michael Waltrip, McDowell was soon racing for underfunded “start-and-park” teams very early in his career. After bouncing around from team to team, McDowell went to now-defunct Leavine Family Racing. After piloting the #95, McDowell paired up with Bob Jenkins in the #34 starting in the 2018 season. Front Row Motorsports wasn’t the biggest or most competitive team on the grid but they could get it done if the planets aligned, like the Daytona 500. For someone who was tested for so long, it all finally paid off for McDowell on the biggest stage possible and it’ll be a night he’ll never forget.