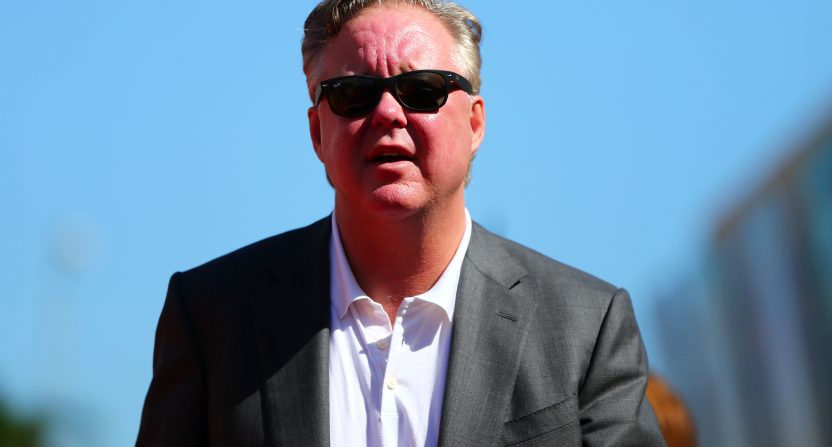 Amid all the bad news about low ratings, low attendance and sponsors leaving the sport, NASCAR had a perfect day on Sunday. Watkins Glen was filled with fans and RV’s, there was an exciting race from start to finish and the popular Chase Elliott, the man who has both old school and new school fans, won his first Monster Energy NASCAR Cup Series race.

That rare bit of good news for the sport lasted about 18 hours until news broke that NASCAR CEO Brian France got arrested for DWI and Oxycodone possession Sunday night in Long Island.

According to TMZ, France was stopped for driving through a stop sign in the Hamptons. And after failing a field sobriety test, France was found to have a blood alcohol level of twice the legal limit and had Oxycodone pills on him in a search. France also supposedly tried to name drop his famous and powerful friends during the stop, including President Donald Trump.

NASCAR’s Brian France spends night in jail after being charged with a DWI & possession of a controlled substance that is being reported as oxycodone. Arrest happened at 7:30p.m. pic.twitter.com/tMdDbCgE1Q

This isn’t France’s first incident with alcohol and driving. In 2006, according to the Daytona Beach News Journal, France was reportedly driving erratically to his Florida condo but because of a technicality and police interviewed France in his home, they could not arrest him even though France admitted to the officers that he was drinking earlier that night.

Honestly, I hope Brian France sees this as a wake up call and becomes a better person as a result. Yes, this is bad but sometimes it’s about how you react to something that’s bad. If France sees this as a means to get help, gets that help and shows that he has changed, we are a forgiving society and we will support him through his recovery.

Having said that, I also hope NASCAR sees this as the catalyst to finally get rid of Brian France as CEO of NASCAR. Even if he may do a lot behind the scenes, France has been an absent leader for years by rarely being at the track. That gives off the impression to fans, the media and those at the track, that he doesn’t care about NASCAR if he can’t be bothered to show up at the track more than a few times a year. Now, he has just ruined a very rare piece of good news for the sport within 24 hours of it happening. Does anyone remember Chase Elliott winning yesterday? That seems so long ago. And it’s all Brian France’s fault.

Those two statements are mutually exclusive. There’s nothing I want more than to see Brian France get help, get well and come out of this a better person. And when that happens, I want him to find a great job and prosper, just not as CEO of NASCAR. The time for change is now.