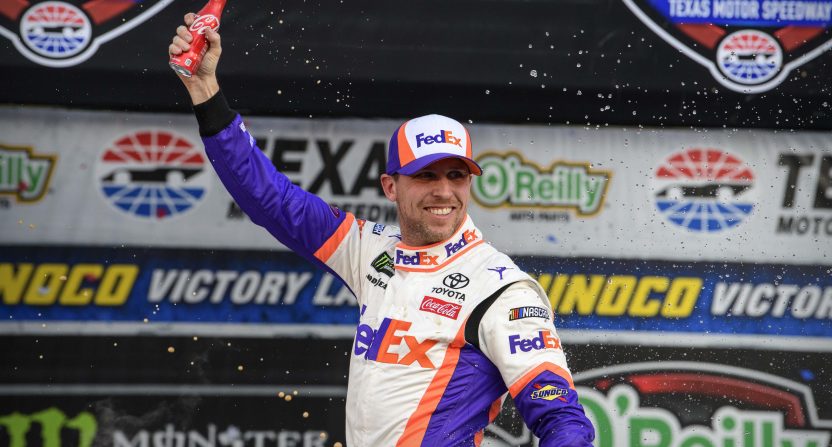 Along with being one of the top NASCAR stars, Denny Hamlin is a great golfer. With a handicap of 3.5, Hamlin spends much of his off-racing time on the golf course. In fact, during a pro-am at Quail Hollow, Hamlin and fellow drivers Kyle Larson and Ricky Stenhouse Jr. teamed up with PGA pro Harold Varner III and finished second.

Talking to Golfweek, Hamlin was open to someday trying to participate in the PGA Tour but wanted to do make sure he didn’t embarrass himself and not have that distract from his racing.

“I’d definitely love to do that on one of those many tours, but I wouldn’t do it until I got better,” Hamlin said. “I still think I need to get three or four strokes better at least be at scratch should I go out there and embarrass myself.”

Until then, he said, he’ll settle for being “the best driver in NASCAR.”

Trying to play golf at a PGA Tour level is tough enough when you’re solely focused on your play. It’s even more difficult when you have another profession and are trying to not only play, but compete in the PGA Tour. Tony Romo has tried on occasion with sponsor exemptions and missed the cut at last week’s AT&T Byron Nelson.

When it comes to Hamlin, who races at least 38 weekends out of the year, it’s difficult to find a free weekend to even play a tournament but he and his NASCAR golfing buddies find time to play a round at a nearby course each race weekend. They also have their own “Golf Guys Tour” where 20 people from within NASCAR participate in their own tour around Charlotte complete with sponsors and some sweet looking trophies for the winner.

Words from our winner, @KyleLarsonRacin 🏆 pic.twitter.com/o0j3AomrOF

Hamlin has no plans to walk away from NASCAR and at 38, he can still remain in NASCAR for many years and be competitive. In fact, this season Hamlin won the Daytona 500 for the second time and also won at Texas. But while Hamlin isn’t planning on retiring, it doesn’t hurt to make plans on what to do after retirement and golf may be the next logical step.