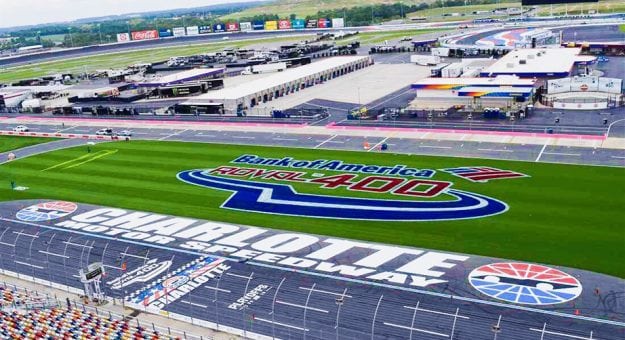 Once the Bank of America Roval 400 was completed at Charlotte Motor Speedway, fans couldn’t get enough of the new track and had thoughts on what track could possibly be next. Nothing is really on the horizon, and as far as we know, Charlotte will be the only Roval for the foreseeable future. But it never hurts to fantasize what could be.

Not including Charlotte, there are 12 tracks on the Monster Energy NASCAR Cup Series schedule that have some semblance of an infield road course. Some tracks like Daytona could easily convert and have a race if they wanted to, while other tracks might need some work done to make it NASCAR ready. Charlotte was a couple years in the making so who knows what will come a couple years from now.

In ranking these tracks, I took the most likely track layout for each track and ranked them based on things like if the track would provide good racing, if there’s an open spot on the schedule to do a Roval plus a regular oval race, and if it would be an improvement to the schedule over an oval race.

And apologies in advance for the squiggly lines outlining the tracks. It’s a lot tougher to photoshop a straight line on a trackpad than I thought. 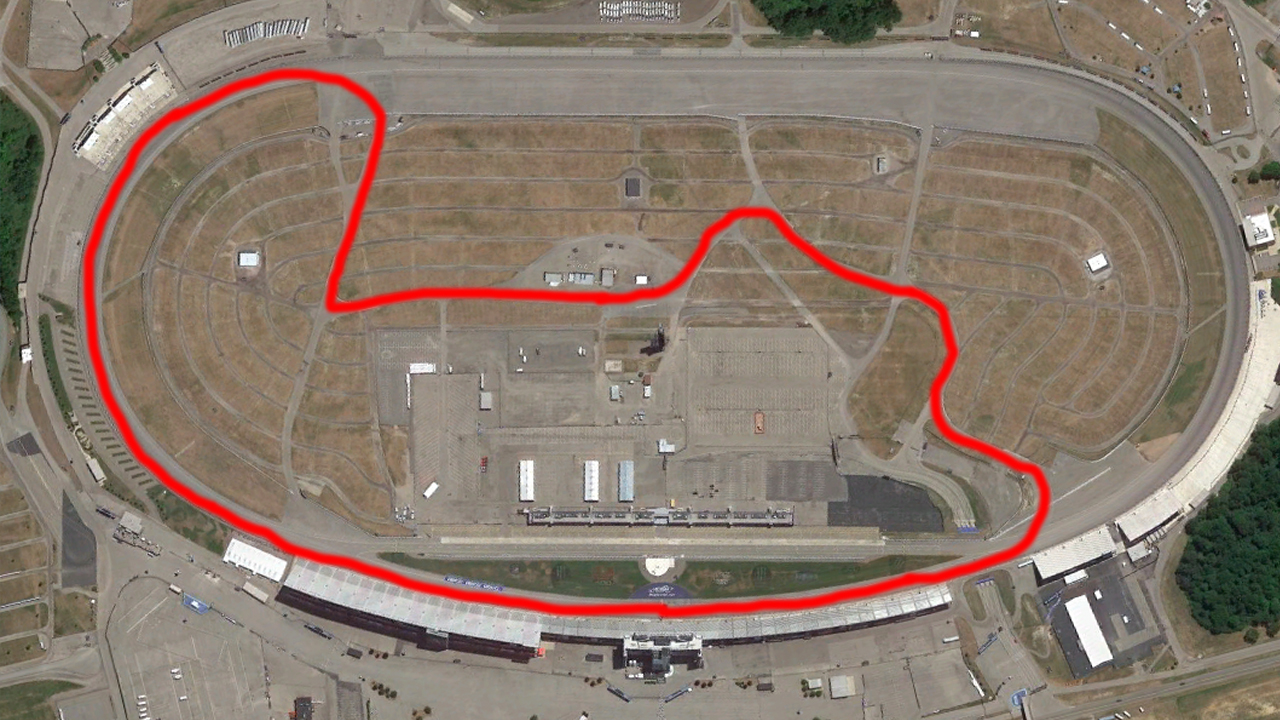 The track: Michigan is going to be fast, particularly on the oval part. But if you thought 90-degree corners were tough in Charlotte, there’s a turn that’s even tighter that may cause problems. 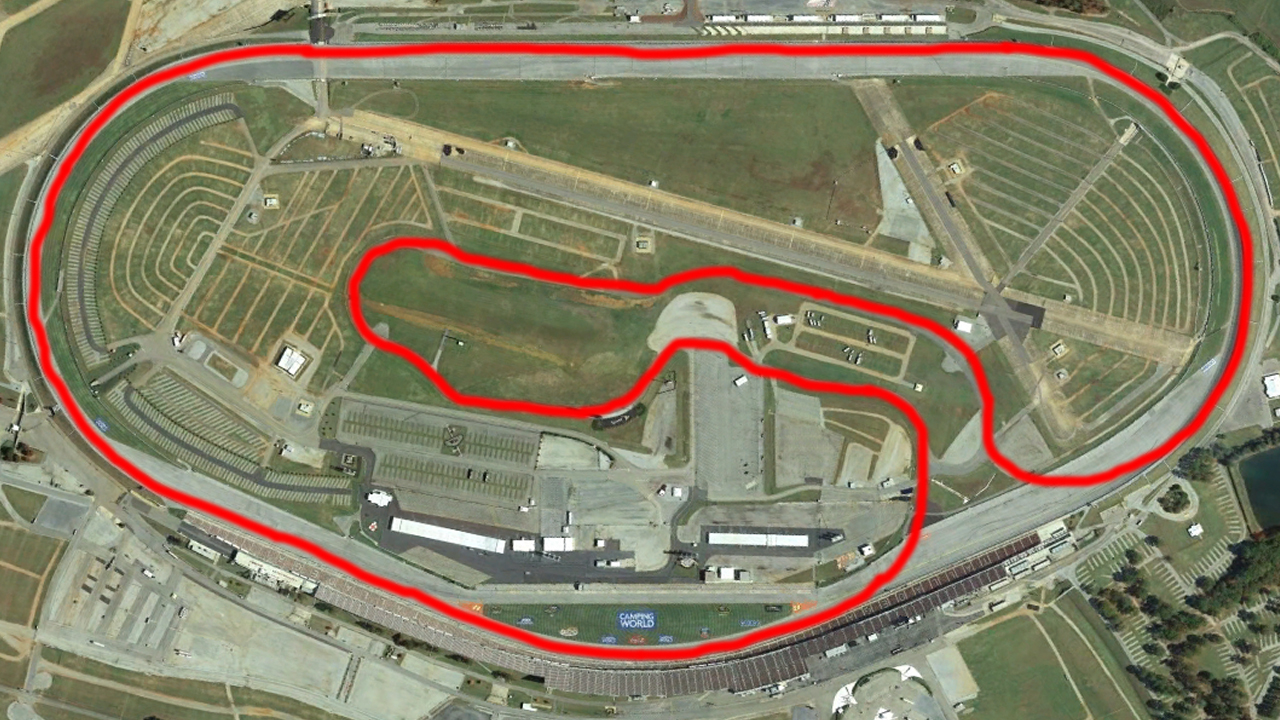 The track: While Daytona has the more famous Roval, Talladega can claim one for their own but it’s not exactly used that often in organized competition.

Would it make for good racing: One, like Daytona, you probably don’t want to take away the two oval Talladega races. And two, start/finish would no doubt need to be moved because you would need to brake before the finish line to make the first turn. 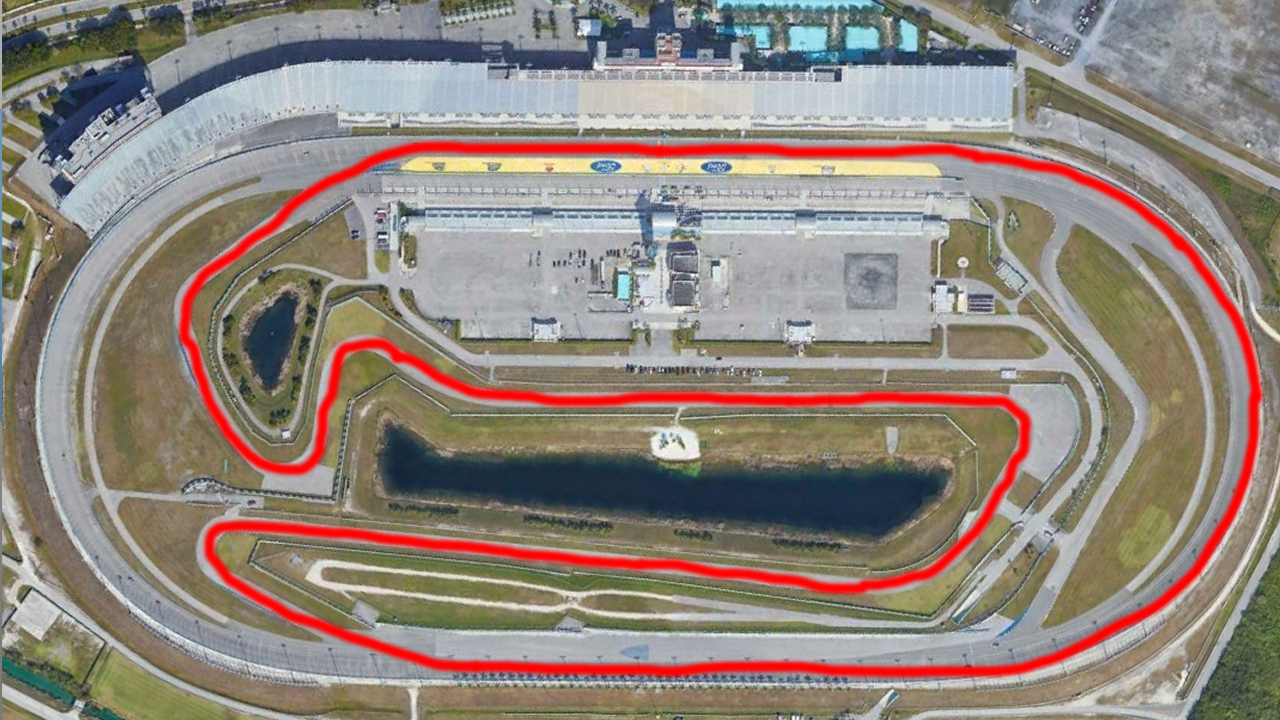 The track: Another track that could do a Roval race tomorrow if it wanted to, Homestead has a sizable infield section along with the complete oval other than Turns 1 and 2.

Would it make for good racing: The track looks like it would be great and if there was a time where they didn’t have the final race of the season, I’d like to see them try it once. But as much as I like road courses, the final race should be an oval and Homestead has never really disappointed when it comes to the action so I’m cool with keeping it as is. 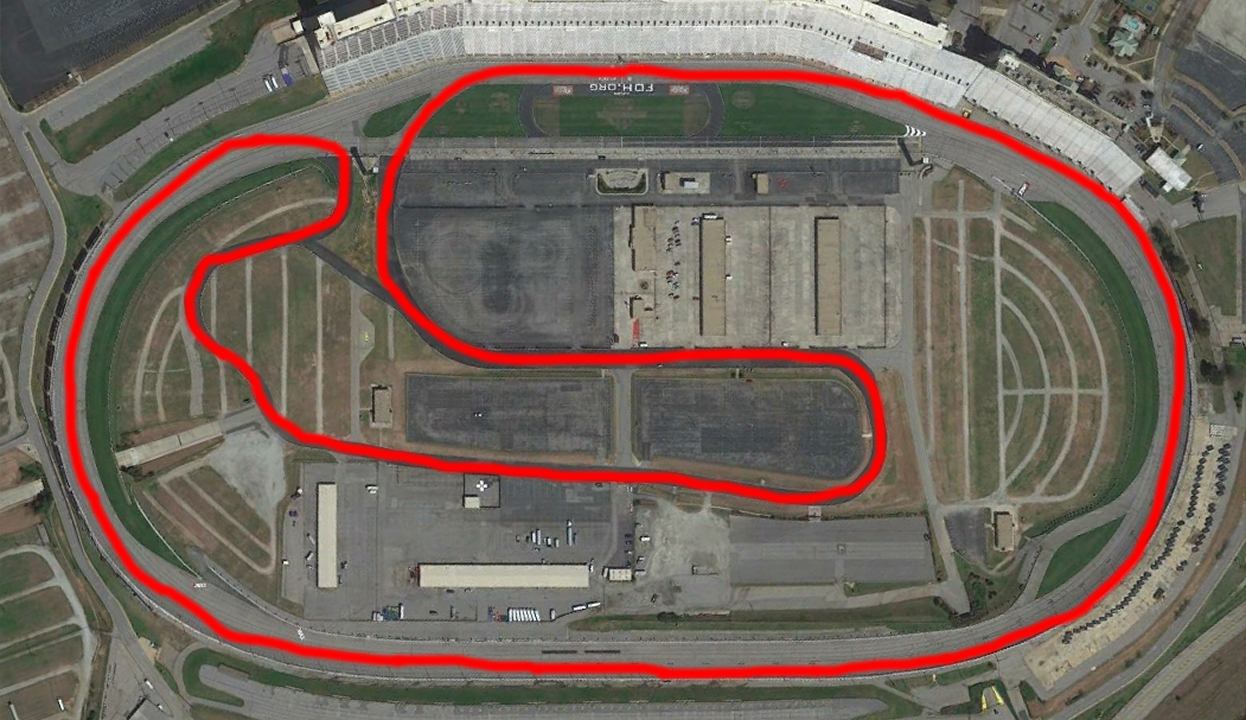 The track: Atlanta is something similar to Charlotte in that there’s an infield section and a chicane. I decided to take the Turn 3 chicane out because the banking may make it difficult for cars to go from the flat to the banking while in the turns.

Would it make for good racing: It probably would since the setup is similar to the Charlotte Roval. The only problem is that, of the 1.5 mile quad-ovals, Atlanta is arguably the most difficult track for drivers due to the surface. The track hasn’t been paved in over 20 years and it’s caused tires to lose wear immediately, creating a difficult day and only the best can win.

In addition, with only one race on the schedule, Atlanta would probably be fine to keep the oval. Maybe when they have to repave the track, a Roval race may help for those few years where passing will be tougher on the new surface. But I wouldn’t expect Atlanta to invest large sums of money just to have a Roval for a few years. 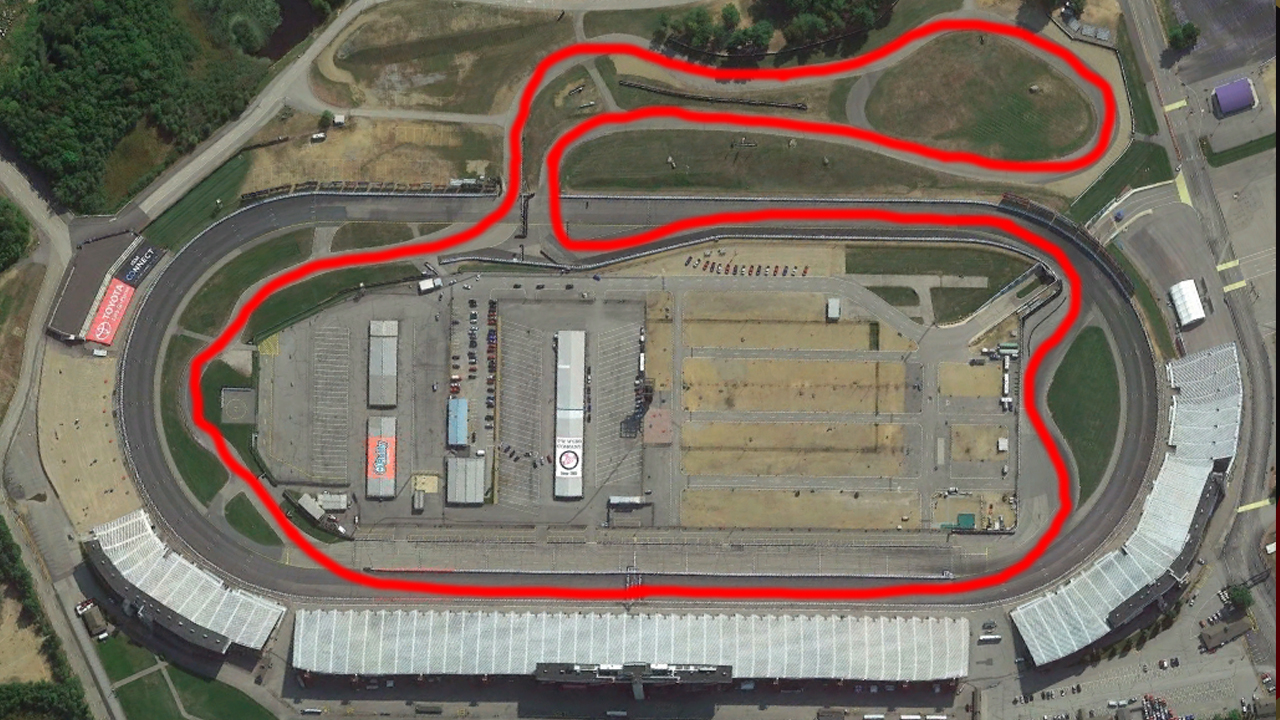 The track: The only track on the schedule that consists of part of their racetrack being outside the oval.

Would it make for good racing: This wouldn’t be as much a Roval as it would be an actual road course. Neither of the turns are used and the frontstretch and part of the backstretch are the only parts used. I wish there were still two races here so we could try this out for one of the races. 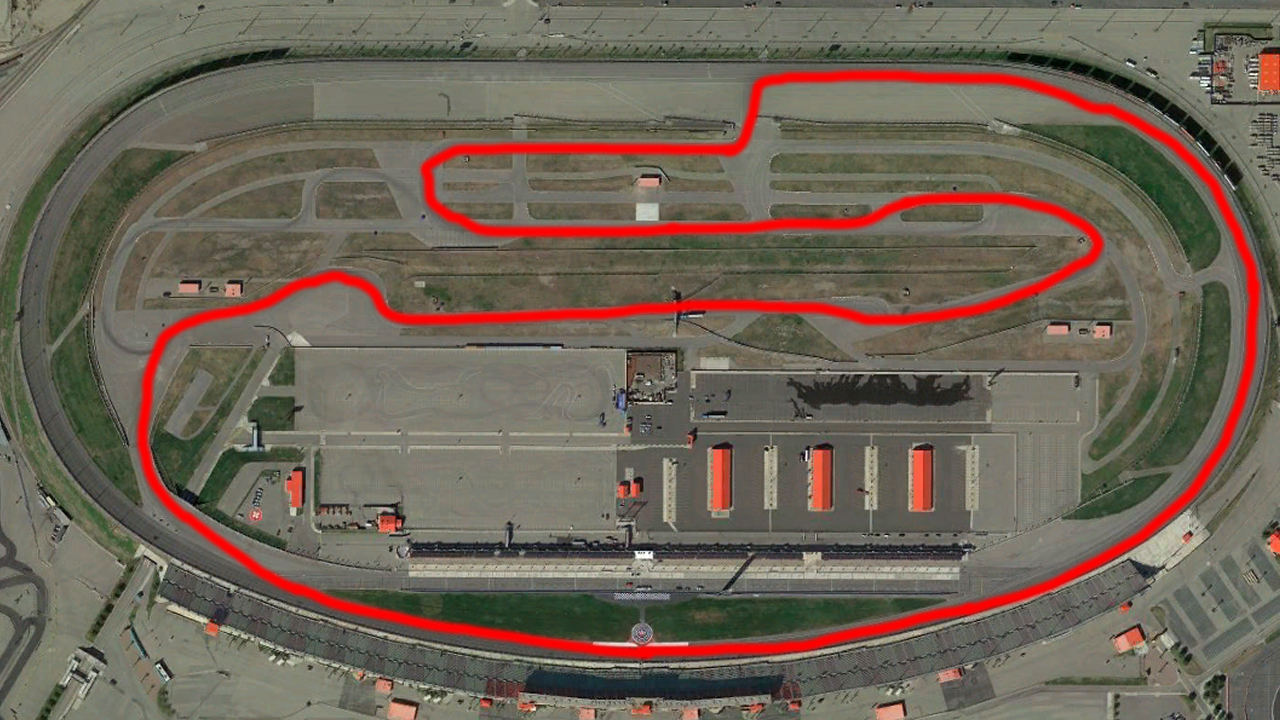 Would it make for good racing: This track may have some potential. The oval will probably be preferred since NASCAR only goes there once a year and they would likely need to spend some money to make it suitable for NASCAR racing, but this might be one of the faster road courses in the world and could be great. 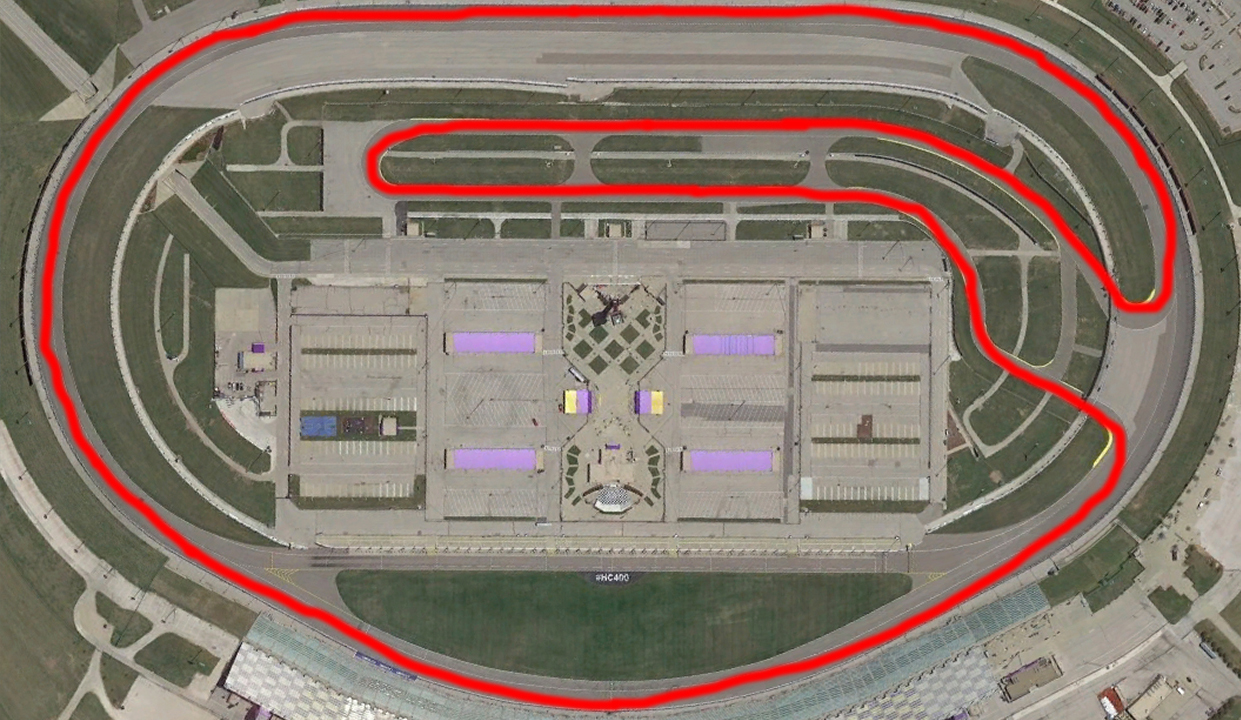 The track: Kansas’ track is rather simple but effective. The road course part doesn’t look as windy as Charlotte but still looks technical.

Would it make for good racing: I have no reason to suspect why it wouldn’t. Despite it being a Roval, the road course part still looks fast other than the hairpin turn. In addition, Kansas has two races so, depending on cost, they may be able to change up one of the races and be a hit with fans. 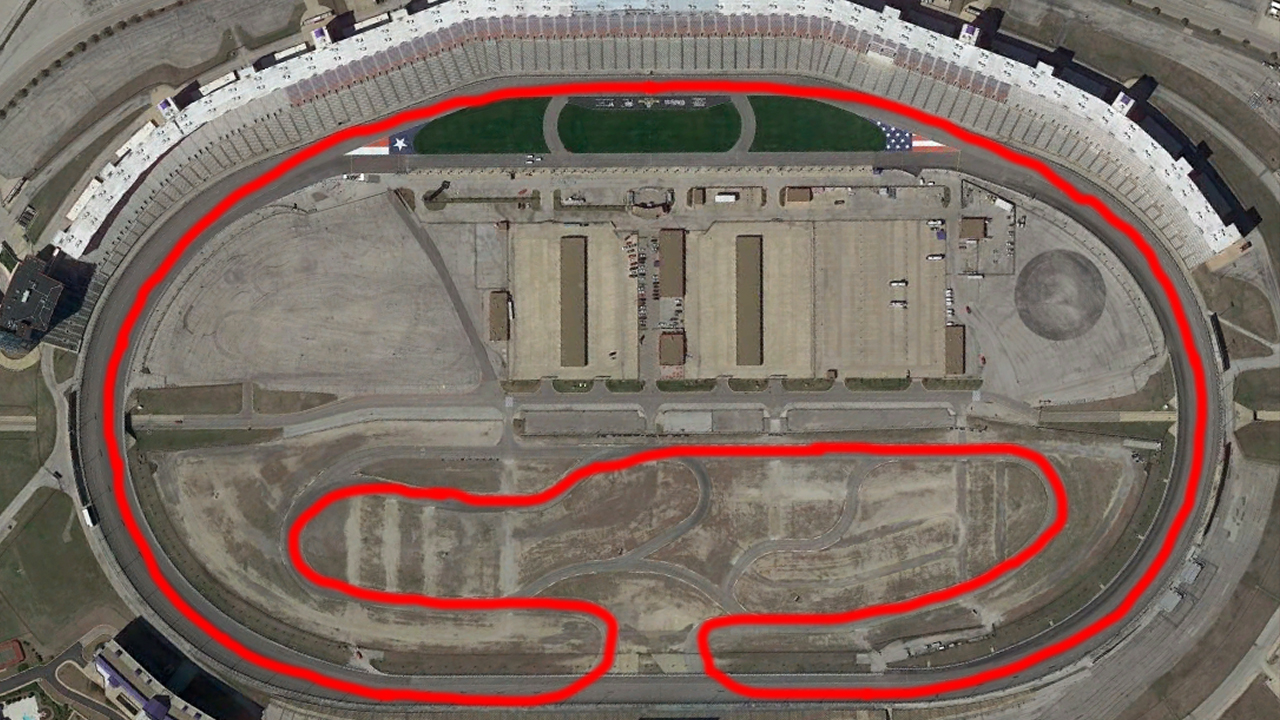 The track: The elevation change makes it similar to Charlotte’s Roval. And like Vegas, you can have an enclosed track inside the oval but the entrance and exit will be on the backstretch.

Would it make for good racing: I’m not sure if Texas would go for it but I think it could be great. Something to consider, Texas has condos in Turn 2 and adding an infield part would put that in even higher demand. 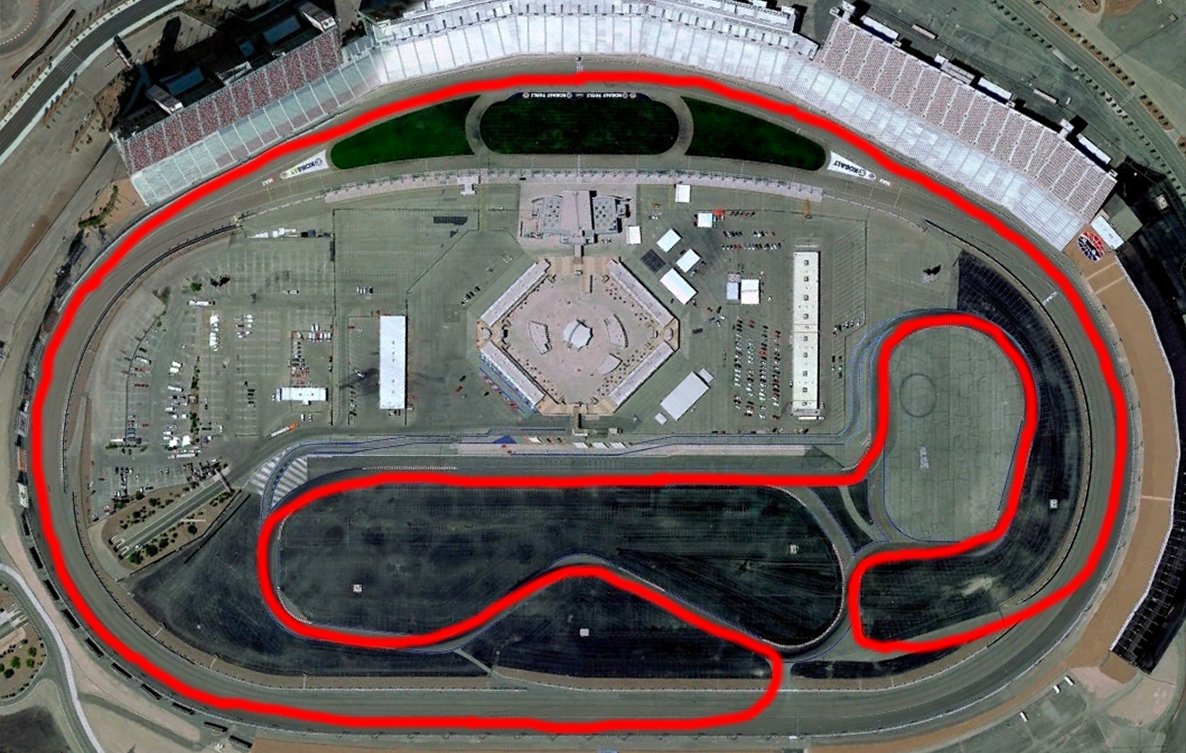 The track: Las Vegas is one of the rare tracks on the schedule who can have a track fully inside the oval. Unlike other tracks, Vegas starts its road course part closer to Turn 3.

Would it make for good racing: I’m not sure how much it would cost to renovate the infield part of the course but I think this could be good. Unlike Charlotte, there’s plenty of runoff area so it may not be as chaotic. Either way, it’s worth a shot. 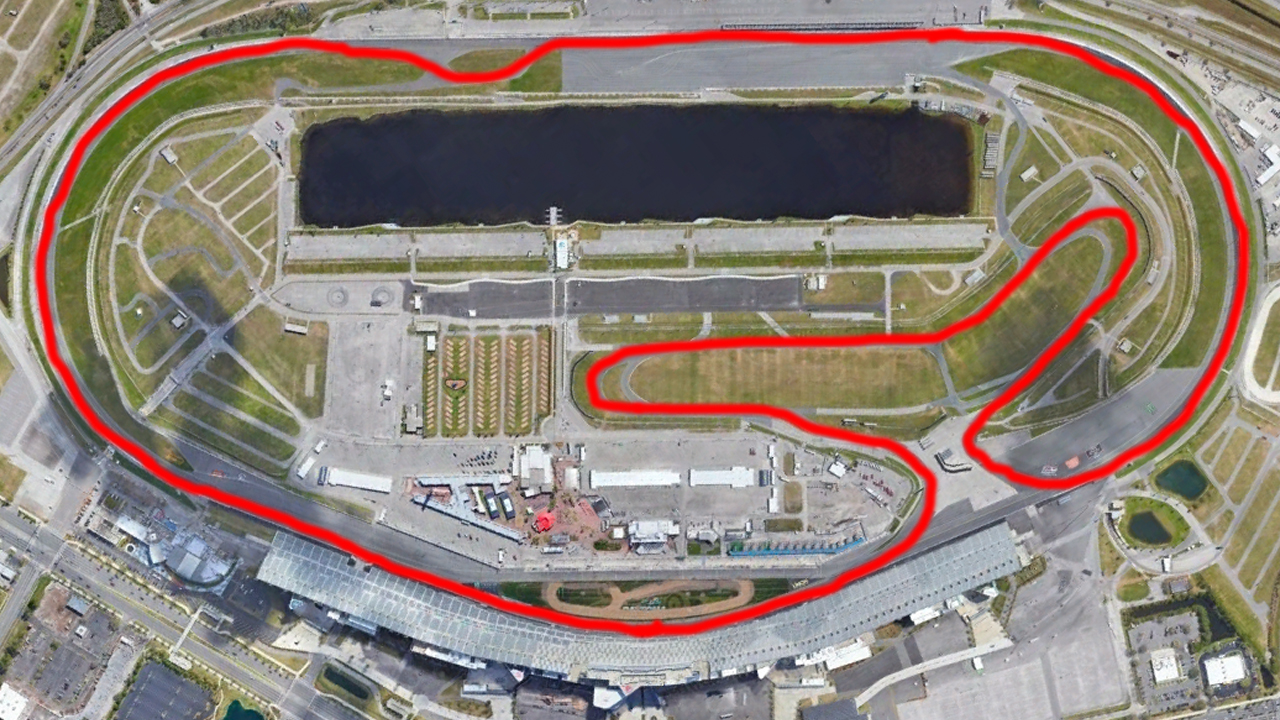 The track: This is the classic Roval. The course that’s held the Rolex 24 at Daytona since 1962 and has been raced by some of the most legendary drivers in the world.

Would it make for good racing: We know the Daytona infield course makes for great racing. The trouble is that those races consist of sports cars with far better brakes than on a stock car. Stock cars will need to slow down farther, and unless there’s some sort of chicane off of Turn 4, they may be going too fast that drivers would need to brake before crossing the finish line. And that might cause problems.

In addition, restrictor plate races are already entertaining to fans that we don’t really need to take away the Daytona 500 and Firecracker 400 races. Having said that, if NASCAR wanted to, they can have cars racing on this track tomorrow so maybe instead of having this as a points paying race, let’s have it for the Clash. 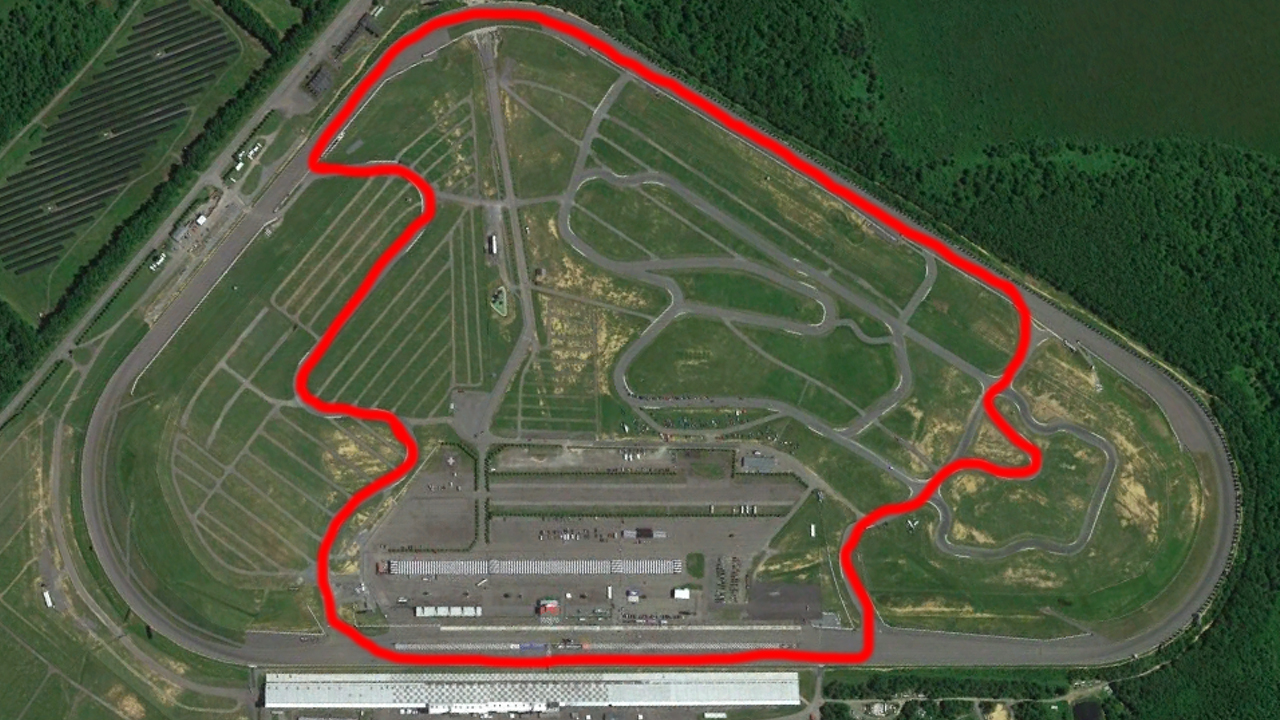 The track: Pocono has dozens of potential combinations for Roval courses so I had a little help mapping out this one.

Would it make for good racing: Of all the potential Roval tracks, many fans would like to see Pocono be next to do it. With two races on the schedule, they certainly can have both types. And if they wanted to keep up the unpredictability, they could change the layout each year and make it more difficult on teams. The infield is also massive that even though most of the track is in the infield, it shouldn’t effect infield camping all that much. 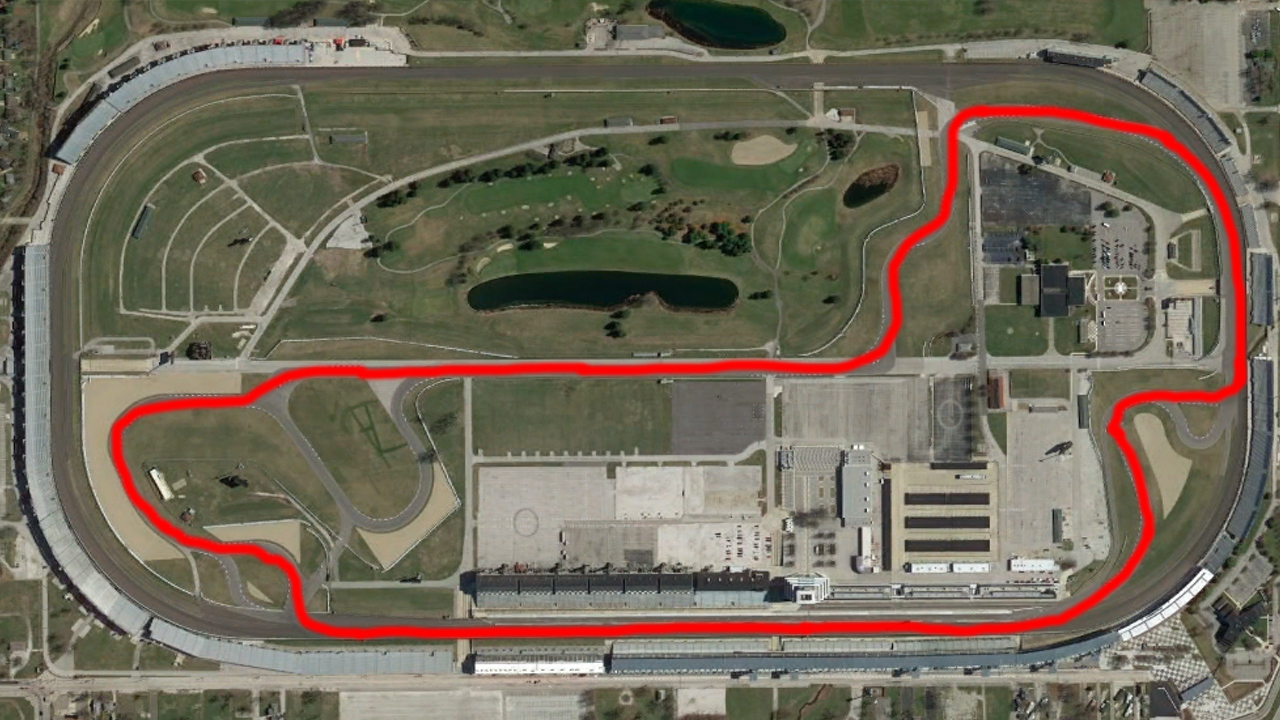 The track: Once again, another track that’s capable of doing a Roval race without much more investment. This track has been a part of Formula 1 and Moto GP (in different formations), and is now used in IndyCar.

Would it make for good racing: I’m partial to keeping Turn 1 of the oval but I’m keeping the IndyCar format. While this would probably be better for NASCAR racing than the oval, the Brickyard 400 is too prestigious to go from the oval to the road course.

I do have a rather “out of the box” idea. Depending on how fast track workers can convert the course, a doubleheader where Saturday consists of the road course and Sunday consists of the oval. The schedule would be tight and it be a very long day, but have a practice session in the morning, qualifying around noon, and the race around 3. And as far as the Xfinity Series is concerned, how about taking them to O’Reilly Raceway Park and creating a six-day Indy extravaganza. Cars race on the dirt track on Tuesday and Wednesday, Trucks race at ORP on Thursday, Xfinity races at ORP on Friday, Saturday is the road course, and Sunday is the Brickyard 400. That would be an event.

It’s important to note that even though the Roval was awesome, it would be dangerous to overdo it and just throw out Roval races left and right for the sake of it. Too much of a good thing can be a bad thing, and if we have too many Roval races, people will grow tired of them in the same way they grew tired of 1.5 mile tracks. While there would be tracks that would do well with a Roval race, maybe it’s for the best we just have the one race in Charlotte and have that be its own special event each year.