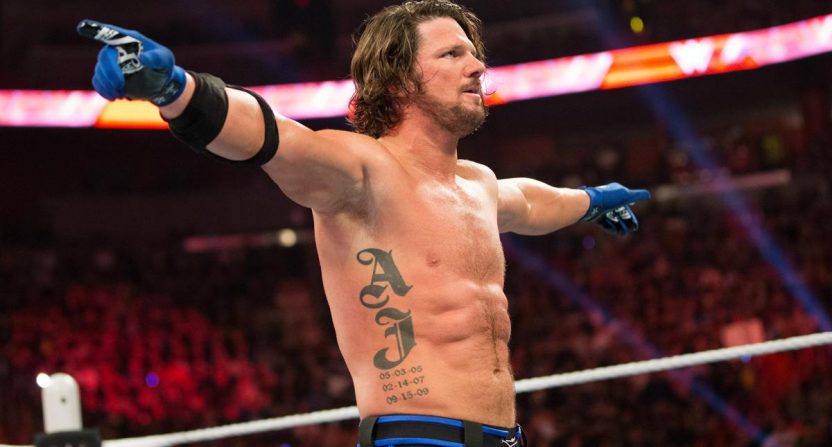 Flat-eartherism is all the rage for professional athletes these days after Duke-educated Cleveland Cavaliers star Kyrie Irving stated that he thought the Earth was flat. WWE professional wrestler AJ Styles wants you to know that he isn’t a flat-earther … but maybe they have some good points.

“I am not a flat-earther, but there are some things that they say, [to which Styles responds] ‘huh, I never thought about it like that’. Here’s the thing, you don’t have to believe anything that’s told to you. Like you can always question anything.”

Styles added, “and although I’m not a flat-earther, there are some things that, like, make sense. But then again, satellites, the curvature of the Earth if you’re a sniper, you’ve got to take all that into account. I’m not a flat-earther, but they bring up some interesting points. It’s interesting and I think you should be able to question anything you want. And you don’t have to agree with everybody.”

This comes after Daniel Bryan said in February that Styles might be a flat-earther. Styles wasn’t happy with Bryan’s (maybe half-true?) assertion, but he went on to say more things about flat-earthers, aliens, and NASA’s global, non-American, illuminati-funded budget, or something.

“I just find it interesting. I watch all the stuff about aliens. I’m a sci-fi guy. I just enjoy that stuff and conspiracy theories. That intrigues me, so there are just a number of things. I could have killed Daniel Bryan for saying that because now you get all this stuff. ‘God, shut up! Please don’t get that started because I’ll never hear the end of it.’ But it’s interesting. But I find a lot things interesting when it comes to science fiction or fact. I don’t know. Who can say? The only person that ever told me or told the world that other planets exist is NASA, but there’s a reason for all… they’re making a lot of money, a lot of money. They have a lot of money coming in. NASA is not an American thing. It’s a world thing. A lot of people don’t know that, so when you start asking questions, there are not a lot of answers sometimes.”

NASA has actually been hammered by budget cuts in recent years, so it’s not like the agency is swimming in cash. And the agency isn’t some massive profit center like Styles suggests.

Anyway, remember that the earth is not flat and that, no, the flat-earthers do not have good points.