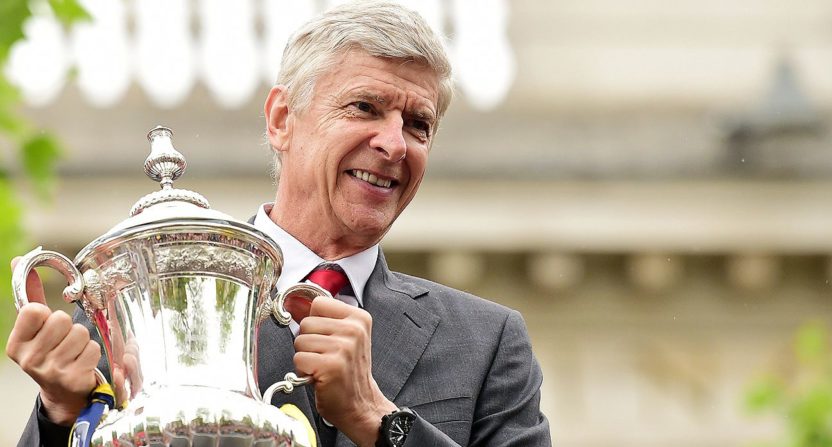 I have to be honest; I never thought this day would come. I thought that given Arsene Wenger wanted to remain at Arsenal and owner Stan Kroenke being reluctant to fire anyone, I figured Wenger would die as Arsenal manager. Instead, Wenger announced that he is set to leave the team he has managed since 1996 at the end of this season.

In a statement posted by the team, Wenger said the following:

“After careful consideration and following discussions with the club, I feel it is the right time for me to step down at the end of the season.”

“I am grateful for having had the privilege to serve the club for so many memorable years.”

“I managed the club with full commitment and integrity.”

“I want to thank the staff, the players, the Directors and the fans who make this club so special.”

“I urge our fans to stand behind the team to finish on a high.”

“To all the Arsenal lovers take care of the values of the club.”

“My love and support forever.”

In many ways, it was time for Wenger to step aside. The man who had been managing Arsenal for 22 years, who revolutionized Arsenal into a world-class powerhouse, suddenly saw the Premier League world passing him by. Over the past few years, tension had been growing among Wenger and Arsenal fans. Angry by a reluctance to spend for top talent, as well as a perceived lack of motivation to go for the Premier League title and be happy with a top four finish every year, the “Wenger Out” crowd had been growing and growing. It has grown to a point where “Wenger Out” signs have become a meme.

It would have been disappointing to think of Wenger’s legacy being defined by his final few years. Yes, Wenger lost a step or two these past few years but that shouldn’t tarnish the accomplishments he has done as Arsenal manager.

Before Arsenal, Wenger was managing in Japan. While he had been Monaco manager for seven years before that, his job history wasn’t something you would expect a team like Arsenal to be impressed with. But Arsenal had been undergoing a transition in the mid 90s and took a chance on Wenger.

Wenger quickly rewarded the team with trophies. In his first season, Wenger began his streak of top four Premier League finishes that stretched all the way to this past season, where Arsenal finished fifth. In his second season, and first full season, Wenger and Arsenal won the Premier League along with the FA Cup. Arsenal would win at least one trophy in six of Wenger’s first eight seasons as manager.

Arsene Wenger’s greatest achievement happened during the 2003-04 Premier League season. While one team wins the Premier League every year, every team loses at some point over the 38 game season. That didn’t happen with this Arsenal team, as they went 26-12-0, becoming the first team since Preston North End in the inaugural 1888-89 season (22 games) to go unbeaten throughout an entire season. The “Invincibles” was born.

After three Premier League titles, seven FA Cups and seven Community Shields, Arsene Wenger is going to end his tenure at Arsenal. While the team is set to finish in its worst position since Wenger took over, all is not lost. Arsenal is in the UEFA Europa League semifinal against Atletico Madrid. Since Arsenal is long out of the top four, a win in the Europa League would put Arsenal in next year’s Champions League and send Wenger off with one last trophy.

If there is ever a person deserving of a storybook ending, it’s Arsene Wenger. There’s no doubt that Wenger is a legend and will be seen as a legend. Even the most hardened “Wenger Out” Arsenal fan can appreciate the things he has done for this team. This is a man who was the last of the Arsenal teams who had their home in Highbury, before they went to the massive Emirates Stadium. While it was the right decision for Wenger to step aside, this will no doubt be a sad moment for Arsenal FC and for soccer in general. We can only hope that Arsene Wenger receives the send off he deserves.