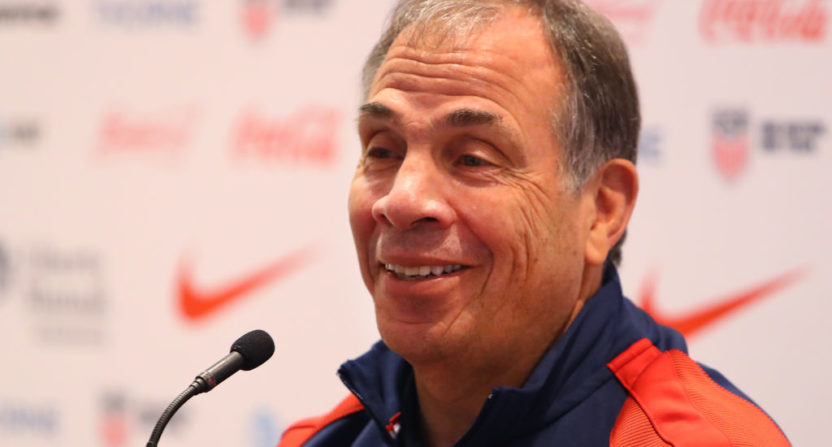 World Cup qualifying in CONCACAF has never been easy, just ask Mexico four years ago. But after a harrowing 2-0 defeat at home to Costa Rica, the USMNT is now staring down the barrel of more than just the usual CONCACAF slog and isolated tough results; they’re staring down staying at home next June.

“We made some critical errors, and we didn’t have a good night. Costa Rica outplayed us and outcoached us.” said Bruce Arena. It is rare to see the US outplayed at home in a World Cup qualifier, let alone lose one, even worse two in the same cycle for the first time since the qualification process for the 1958 World Cup.

Nothing went right for the US on the night, not the tactics, not the 50-50 battles and certainly not the 50-50 refereeing decisions. Most notably, five minutes before Marco Urena’s first goal, Jozy Altidore and Costa Rican centerback Kendall Waston got into a tangle in the penalty area that in real time, and on replay, looked like a certain penalty. But the call didn’t go the US’ way, which set the tone for the rest of the night.

“You have to rely on the referee’s judgment, and those calls didn’t go our way tonight,” said Altidore.

Arena wouldn’t be drawn on the performances of any one player, more notably Tim Ream and Darlington Nagbe, who were not at their best in a noticeable fashion.

“We were probably outplayed in most areas of the field. Our backline made some mistakes, we didn’t come up with any big saves and our attacking players weren’t dangerous on the night,” Arena said.

Costa Rica’s tactical gameplan wasn’t a mystery to Arena, nor any of the XI that took the field. Minus the injured Joel Campbell, the Ticos threw out their strongest possible XI, set up in their 5-4- 1 and set out to soak up attacking pressure, press and then pick the US off on the counter, which they executed to perfection. The US, though they certainly seemed prepared for it, could not find a way to pick the lock and therefore left themselves very vulnerable, no matter the individual performances. And to Altidore, it looked fairly familiar.

Altidore said, “You have to give credit to them, they did exactly what we did to some teams, soak up pressure and hit them on the break.”

As for Tuesday in the heat of Honduras, and the now not certain prospects of qualifying, Arena attempted to keep the loss, and the other results around the Hex, in perspective.

“I don’t know if you’ve been around for the last year; qualifying has been in jeopardy for all teams in the past year. It’s going to be a battle amongst the remaining four teams,” Arena said. “You hate to look at one game and not look at the whole. We’re still in position to qualify for the World Cup.”

“It puts more pressure on us, but we’re still right in the thick of it, and our plan is still to qualify for the World Cup”, Tim Howard added.

Qualifying is certainly in more jeopardy now than it has been even last November. The tasks ahead are still difficult but the math is still in the US’ favor, though the margin for error has tightened considerably.

Arena ended the press conference on a lighter note in attempt to calm what is fast becoming a tense situation. When he was asked whether he wanted Mexico to win, he said he didn’t know who they were playing. After being told they were playing Panama, he responded semi-jokingly, “they owe us one, don’t they?”

The joke seemed emblematic of a team that isn’t letting the new-found pressure get to them. Arena was brought in to salvage a qualifying campaign that couldn’t have started any worse. And after digging out of that hole, he and his team must dig out of another hole, though they still have a better than 50% chance of qualifying for the World Cup despite the hiccup.

They head into Honduras off a stinging loss and without Jozy Altidore due to yellow card accumulation and with more pressure than they’ve faced in the entire qualifying cycle thanks to a troubling reality becoming a worrying possibility.

Surprisingly, that pressure doesn’t seem to be burdening Bruce Arena or any of his players yet. Whether that relaxed feeling turns into the critical points needed in the final three games of the Hex remains to be seen.