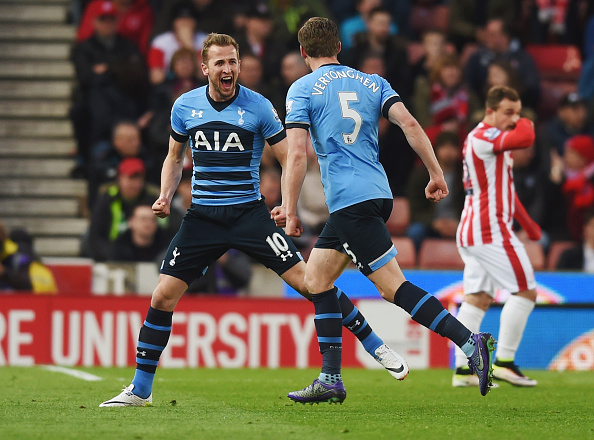 The Premier League is not decided yet.

It didn’t even matter that Alli slipped the ball onto the post in front of a totally empty goal on his next chance, after spinning away from goalkeeper Shay Given. Because a little later, Kane got another and registered Tottenham’s third. And then, late on, Alli finally made it 4-0 on a fine volley.

And so the gap with Premier League leaders Leicester City is down to just five points after the Foxes dropped points against West Ham on Sunday. With four games to go, this thing will likely go the distance, since the chasm between can be bridged within a pair of games.

Manchester City and Arsenal, in third and fourth place, respectively, are but a week or so from being mathematically eliminated. Psychologically, they have been out for much longer. It’s a matter of time before that becomes official, and neither has displayed the kind of consistency or grace under pressure to suggest that they’ll make a last, late push for the title. Which is to say that the Premier League, which has known just three different winners in the last 11 years – Chelsea, and the Manchesters United and City – will have either a winner that has never won it before (Leicester) or one that last claimed it in 1961 (Spurs).

No matter the exact outcome – and we neutrals do seem to be getting the joy of a competitive final few days of games again, which has a habit of conjuring up a particular kind of tension and magic – this season has been paradigm shifting.

If Leicester comes second, it’ll be the club’s best performance since 1929. If Spurs do, that’s their best showing since 1963.

The word historic gets overused, but it applies to this season.

But Leicester and Tottenham haven’t just upset the natural order, they’ve disrupted their industry. The Foxes more so than the Spurs, of course. The former are supposed to be fighting relegation right about now but somehow caught lightning in a bottle under Claudio Ranieri instead. The latter aren’t supposed to be able to compete for the title, what with their thinner budget and smaller talent pond to fish from than the truly big clubs – not to mention their typical late-season swoons. But Mauricio Pochettino whipped all that young talent into shape and capitalized on the malpractice by its overlords in Manchester, Liverpool, and some other London neighborhoods.

Yet in some ways, and this thought feels criminally premature, even if it’s worthwhile all the same, the next season will be even more important to the balance of power of the Premier League. You would have no great deal of trouble making a cogent argument that this season has been a total fluke. Between Leicester’s uncanny knack for clawing out results – not to mention the generous helping of penalties – and Spurs’ newfound ability not to choke; Chelsea’s inexplicable collapse; Arsenal’s endless battles with injury and form; City’s inconsistency; United’s identity crisis; and Liverpool’s rebuilding, a lot of weird things have happened this year.

The proof to the theorem that things have changed, then, will be the 2016-17 season. There is a reasonable explanation if this new era of parity really is to be a thing. The enormous mounds of cash being bulldozed into the Premier League by the stratospheric broadcast deals the league signed around the world are trickling down to the clubs. And they may have leveled things off insofar as everybody now has, or soon will have, so much cash that money alone can’t make the difference anymore – the way it historically had. If all 20 clubs are playing with monopoly money, the might of their financial muscle alone won’t allow the biggest clubs to hoard talent and steamroll everybody in their way any longer.

So was it luck, or a string of highly improbably occurrences happening in a conveniently-timed and narrative-shaping cluster? Or has something fundamental about the way the Premier League is won been altered?

We’ll know a year or so from now.