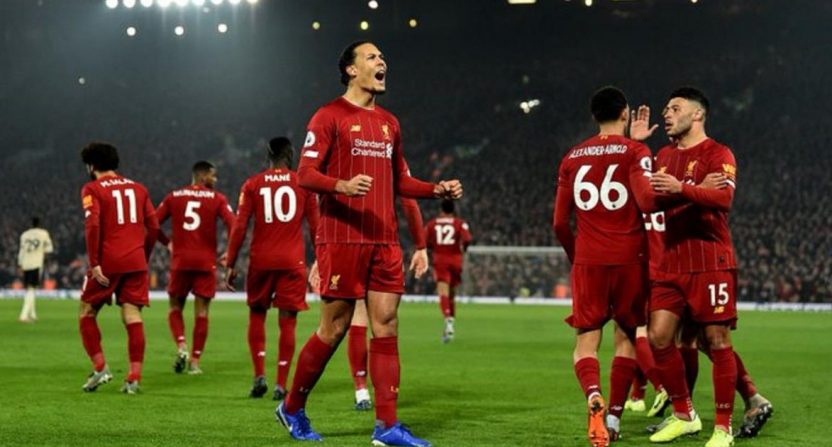 In case you haven’t noticed, Liverpool has been kicking ass all over England. We can go down all the accolades and achievements Liverpool has already had by mid-January, but the most important one is a 20-1-0 record and a 16 point lead with a game in hand.

After defeating Manchester United, the team that gave them their only draw, even the most pessimistic Liverpool fan or the biggest Liverpool hater has to admit that Liverpool is winning the Premier League this season. The only mysteries of this Liverpool side is how early can they clinch the title and can they go unbeaten all season?

It is January and even with this incredible run, it’s way too early to even consider Liverpool going unbeaten. On the other hand, they have been playing phenomenally and the media has to talk about something to make the second half of the Premier League season sound interesting so the chase for invincibility is what we’re going to do.

With 16 games remaining, Liverpool has a tough road ahead of them to remain unbeaten. Even though they are the best team in England, they will deal with FA Cup and Champions League competitions (as well as a makeup game against West Ham) that’ll test them and maybe give another team with a clearer schedule to sneak a win.

It’s going to be difficult but it won’t be impossible and we look at five teams who are most likely to give Liverpool their first Premier League loss.

We start with a team who many might be puzzled why they make this list instead of Chelsea or Arsenal but let me propose this scenario. Imagine Liverpool has gone 37 games unbeaten and they go to St. James’ Park looking to make Invincible history. They got past everyone, including Chelsea and Arsenal the previous two weeks and have long clinched the title.

Now imagine that even though Liverpool won the Premier League, they have a chance to be unbeaten throughout the entire season. It may be unfair but the “bottle” and “choke” talk will resurface and Liverpool will meet a Newcastle team with nothing to lose, will have a raucous crowd, and will no doubt love to be the team who goes down in history as giving Liverpool their first loss in their final game of the season. If anything tarnishes what might be the greatest campaign in English soccer history, it would be this scenario.

Do I really expect Everton, a team who has been unable to defeat Liverpool since 2010, to get the win? Not really. At the same time, Liverpool will have Champions League a few days before the Merseyside derby and if anyone is motivated to give Liverpool their first loss, it would be their Merseyside rivals.

The problem for Everton is that motivation can only go so far. Liverpool put out a bunch of teenagers against most of Everton’s first team and beat them 1-0 in the FA Cup. Everton might want to beat Liverpool but are they talented enough?

Liverpool’s next game is against Wolves and just like the animal, Wolves are a scary team. This is a team who has not only drew against teams like Leicester, Man United, and Arsenal, they won the double against Manchester City.

This is a talented team of giant killers who don’t have to worry about the FA Cup, unlike Liverpool. And considering Liverpool won 1-0 in the home leg less than a month ago with Wolves benching Adama Traoré and Raul Jiménez due to the festive period, Liverpool’s first loss might come sooner rather than later.

Obviously, one of the teams most likely to defeat Liverpool is the defending champs who are currently second. Despite being 16 points behind, there’s a lot for City to play for but they will probably focus more on the Champions League.

Man City’s game with Liverpool is at a worse part of their schedule than Liverpool’s. For one thing, City has games against Real Madrid and Chelsea (may be postponed for FA Cup), in addition to an international break, before Liverpool. Both teams are likely to have Champions League after this game so depending on the scheduling, the effect should be the same. But despite all that, Manchester City will want to do something to a team who is threatening many of their Premier League records.

I’m cheating on this one but stay with me on this. Before the season, it was clear that Manchester City and Liverpool were going to be the two best teams in the Premier League. But even though that was the case, it was realistic to believe both teams would drop points. And most importantly, these teams were going to drop points against teams they shouldn’t be dropping points to.

Chalk it up to an off night or a referee/VAR decision that didn’t go their way or a team being very efficient in their one chance to score, every team can beat any other team on any given day. The beauty of soccer being so low scoring is that the game can change at any second and in most games, neither team is really out of it until the very end.

Last season, the year that Manchester City and Liverpool scored the second and third most points in Premier League history, Man City lost to Chelsea, Crystal Palace, Leicester City (when they weren’t a top four contender), and Newcastle. Liverpool only lost to Man City but drew to teams like West Ham and Everton.

While Liverpool is a great team bound to break just about every record in front of them, they are beatable on any given day. No one expected Norwich (who is now 20th) to defeat Manchester City earlier this season, why can’t something similar happen to Liverpool? A team who comes in and sneaks an amazing upset that should defy any and all logic. Looking at Liverpool’s remaining schedule, they have away games against Wolves, West Ham, Norwich, Watford, Everton, Man City, Brighton, Arsenal, and Newcastle and home games to Southampton, West Ham, Bournemouth, Crystal Palace, Aston Villa, Burnley, and Chelsea.

Look at the away slate. Norwich might be last but they’re unafraid to attack and defeated Manchester City. Watford has had an emergence since Nigel Pearson was hired, being unbeaten in their last six. Brighton is late enough in the season that maybe Liverpool will have clinched the title by then and be too focused on the second leg of the Champions League quarters a few days before the Brighton game. Arsenal will want to remain the only invincible team in the Premier League era and while they have fallen this season, they will be very tough.

I can’t say which team will do it, I can only say that there’s a good chance that one of these unexpected teams will defeat Liverpool. It’s not much of a limb to go out on but it’s a realistic scenario that experts won’t predict because they won’t see it coming. At this point, Liverpool is playing with house money. Liverpool will clinch the Premier League and whether or not they actually become invincible, it’s been an incredibly impressive season. The pressure might be on to remain unbeaten but knowing Jurgen Klopp’s managerial style, that won’t be put on the players.