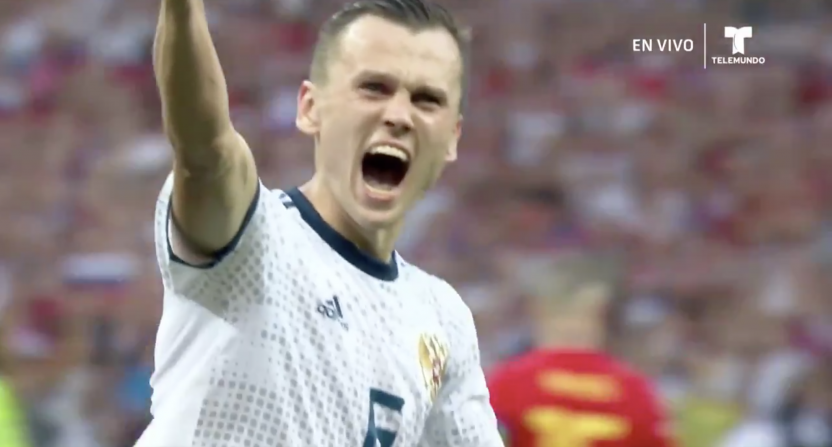 The “Chaos World Cup” has provided so much chaos over the past couple weeks that surely the knockout stage would get us back to normalcy. Instead, the chaos went next level as host and lowest ranked team in the tournament Russia upset Spain 4-3 in penalties to go to the quarterfinals.

This was one of those “bend but don’t break” games for Russia in that they had to concede most of the possession but strike when the opportunity presented itself. In 120 minutes, Spain had 1,006 passes and 79 percent possession but Spain played as though you got bonus points for getting high marks in those stats and were rather terrible in the box.

In fact, their only goal was thanks to Sergei Ignashevich taking down Sergio Ramos as if they’re on a wrestling mat and the free kick deflected off of Ignashevich’s leg.

As if that own goal wasn’t boneheaded enough, Gerard Pique inexplicably jumped with his arm straight up in the air as if he was a ballerina and got busted for a handball in the box. Artem Dyzuba scored and things were level.

So after a scoreless second half and a scoreless extra time period, things were set up for penalties. David de Gea held his own and got close on multiple shots but just couldn’t keep the ball out. On the other end, Igor Akinfeev got a couple saves, including the final save on Iago Aspas and sealed Russia’s quarterfinal berth. And with that, Russia matches their farthest run in the World Cup since 1970 when they were the Soviet Union.

Despite all this great celebration that the host is moving on, a black cloud is hovering over the festivities. The Russian National Team has long been accused of systemic doping led by the Russian government, though FIFA hasn’t seen any problems. This weekend, the father of top Russian goalscorer Denis Cheryshev revealed that his son was being injected with “growth hormone” before this World Cup. The Russian Football Union claimed it was a misunderstanding and the injection was actually a “legal platelet-rich plasma injection.”

Either way, Russia is off to the quarterfinals and now this supposed “easier” half of the bracket has gotten easier. With Spain out, England is the only former World Cup winner and they haven’t won in 52 years. Russia faces the winners of Croatia/Denmark while Sweden/Switzerland and Colombia/England handle the other games in that bracket.