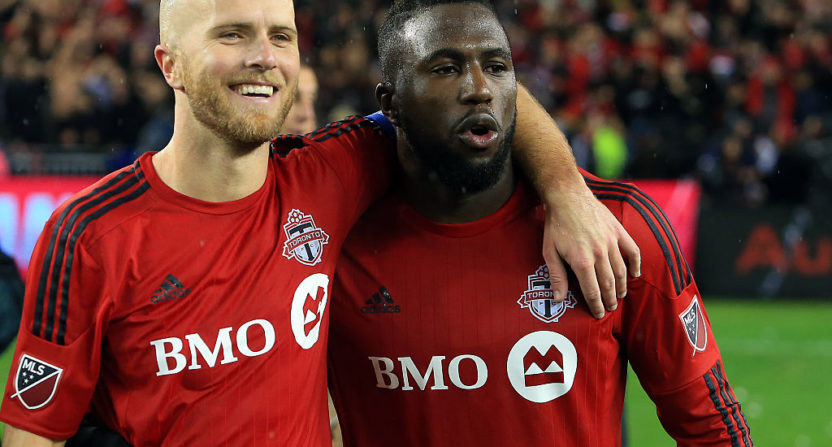 Ever since the USMNT missed the World Cup, fans have reacted in a variety of ways. To many fans, they have been booing those players who were playing in Trinidad and Tobago on the night they failed to qualify. While some may feel that’s too far, it does feed into something Jurgen Klinsmann believed that fans should be tougher on the players because players in Europe wouldn’t be able to get away with being in public after a massive loss.

In the first leg of their Eastern Conference Semifinal matchup with the New York Red Bulls, Jozy Altidore and Michael Bradley encountered some more than usual booing from the Red Bull fans. The booing was two fold. One, because Toronto FC is going against the Red Bulls and Altidore and Bradley are two notable stars. And two, because they were partly responsible for costing the United States a trip to the World Cup.

For Altidore, it was especially tough since he started his senior career with the Red Bulls and while he was relatively okay with the booing, had an issue it came from some of his former fans.

“It’s bittersweet. I had a lot of good memories, I thought, with Red Bull,” Altidore said. “It’s my first club that I played at. It was a bit classless. The World Cup, being disappointed with that, I get, I understand, but the other stuff is a bit disappointing. I was never disrespectful towards these people. It’s my first club, and I have so much admiration for the club, so that part’s disappointing. But the World Cup stuff, I totally understand that.”

[Missing the World Cup] “That’s the part that people fail to understand. Nobody suffers, nobody loses more than the players,” Altidore said. “Look, I get fans, they put a lot into it, and we’re nothing without our fans. But at the end of it, the biggest losers are the players and the program, not being able to further so much good work that we’ve done over the past 10 years.

“I get it. They’re frustrated. I have no problem with that,” Altidore continued. “I understand, but like I said, I just thought at some points it was a little bit classless (Monday) in a place I gave a lot to. And they gave a lot to me and had some good memories, but it is what it is. There’s no loyalty anymore, so all bets are off.”

Fans chanted “Roma reject” at times toward Bradley and while he kept his emotions close to his chest, he credited it to playing an away game in a high stakes playoff game.

“The people that come are allowed to support their team and try to do whatever they can to make an atmosphere to give their team an advantage,” Bradley said. “How that goes is completely up to them. As players, as competitors, you enjoy playing in big games, you enjoy competing when everything’s on the line. You enjoy playing in big atmospheres. You worry about things you can control, you worry about trying to play in the best possible way, compete in the best possible way, and you let the rest speak for itself.”

Soccer is a peculiar sport because you may be rooting for players on your national team who may be on a rival team to the club you root for. It happens to all of us. Quite honestly, I’m all about the home team fans booing players they cheer for when they’re on the USMNT. And because missing the World Cup is an easy thing to use on players, that’s what fans will use. I personally had more of an issue with home fans cheering a visiting player who plays against their team just because they play for the USMNT. They are two separate teams. When they wear the red, white and blue, get behind them. And when they wear their club colors and go against your team, they’re the enemy and should be treated the same as you would any other opposing player.

That’s what everyone needs to remember. Yes, Jozy Altidore got his start with the Red Bulls and spent his first three seasons there. And that was notable because Altidore took what he learned in New York to play in Europe. But at the same time, he hasn’t played there since 2008. And Altidore is in a playoff game against the Red Bulls. Just because he is in a game against his former team, that doesn’t mean Altidore should expect opposing fans to love him. Especially when Toronto is the Supporter Shield winners and is the favorite to win this year’s MLS Cup. Why shouldn’t Red Bull fans boo him?

Obviously, there is a limit and there is a line fans shouldn’t cross. Obviously anything racist, sexist and homophobic doesn’t belong and apart from the occasional “F word” chants, Red Bull fans didn’t do anything that would be deemed crossing any sort of line last night. As long as people keep with booing an things like “Roma reject,” it’s all in good fun.

If anything, Toronto FC got the last laugh. They have a 2-1 lead entering the return leg in Canada and have two away goals. The Red Bulls are going to have to get it together if they want to advance and will have a Toronto team looking at what they just barely missed out on, and hope they don’t miss out on it again.