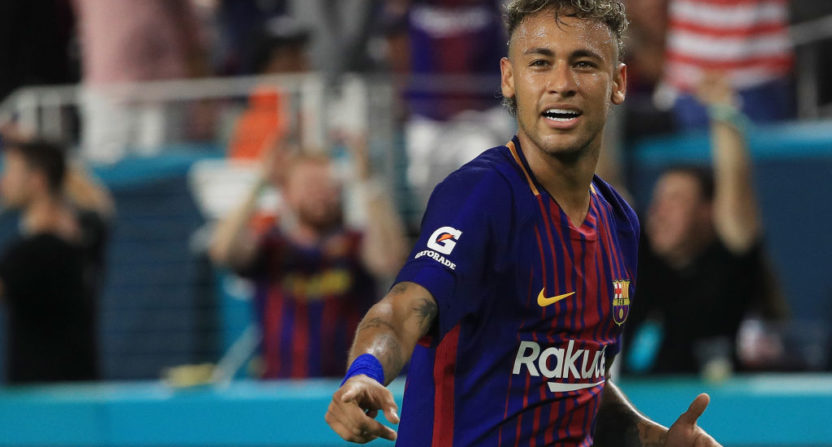 Paris Saint-Germain was all set to conclude the most expensive transfer in history, offering a €222 million buyout for Barcelona star Neymar. But right now there’s a hold up, as La Liga has refused the payment.

Sports lawyer Juan de Dios Crespo visited the league’s headquarters on Thursday with the full payment, but league president Javier Tebas turned him away. Here’s the league’s statement on the situation, from ESPN:

“We can confirm that the legal representatives of the player [Neymar] came to La Liga to deposit the clause and that it has been rejected. This is all the information we can give at the moment.”

According to Marca, La Liga can’t rightfully deny the payment, so this development will only stall Neymar’s transfer, not prevent it. Neymar’s contract, which he signed last October, states he can legally leave the club once the buyout amount is paid.

Tebas refused the payment because he believes the transfer violates UEFA’s financial fair play rules. PSG will also reportedly sign Neymar to a five-year deal worth over €400,000 million, and La Liga and Barcelona both hope UEFA will investigate how PSG is financing this transaction. In an interview with AS, Tebas said he is ready to a file a complaint and alluded to potential “financial doping:”

“If UEFA don’t react, we will present the claim immediately. We haven’t done it yet because we thought that UEFA were going to take measures to ensure that Financial Fair Play (FFP) is respected, and this ‘financial doping’ is avoided.

I am surprised that the individual responsible for FFP, Andrea Traverso, vouches for the checks that PSG’s losses do not exceed €30m over the course of three years. Traverso knows that checking that data is not the problem. The problems are whether PSG have inflated their income, and checks in to the origins and economic bulk of their sponsors. If they [the sponsors] come from Qatar and they are difficult to explain, then we have a clear case of ‘financial doping’.”

However, in a statement on Thursday, UEFA said it has not received any complaints but will review the deal to make sure it meets the financial requirements. From BBC:

“We have not received complaints from anyone regarding this matter.

“All clubs in Europe must respect financial fair-play rules and must demonstrate that they do not have losses of more than 30m euros over three years.

“As part of the continuous monitoring of clubs under financial fair play regulations, UEFA will look into the details of this transfer in due course to ensure PSG are compliant with FFP requirements.

“The transfer of Neymar to PSG will have an effect on the club finances over several years but the impact of such an operation cannot be judged in advance, notably as PSG could well sell several players for a significant amount.”