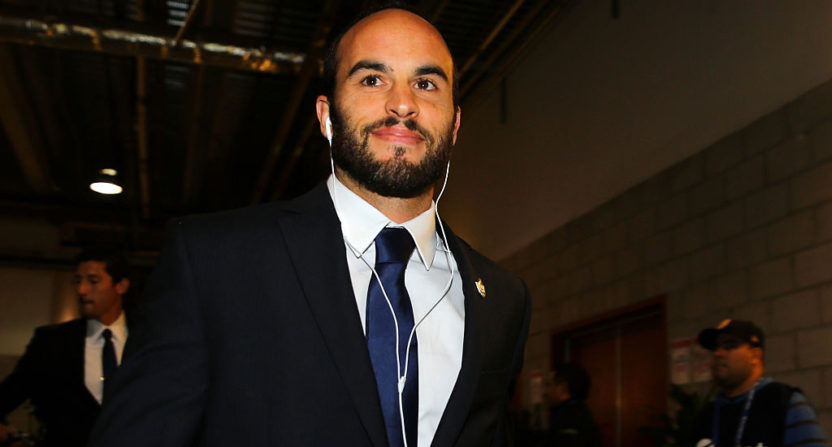 In the aftermath of the Couva catastrophe, many have called for United States Soccer Federation President Sunil Gulati to stand down and be replaced by someone with a new vision for the sport in this country. Many have opened up speculation of throwing their hat into the ring, including Eric Wynalda (sadly). But recently, a new name has been linked with the job: Landon Donovan.

Donovan’s position in the sport is unquestioned. On the pitch, he’s one of, if not the best player in U.S. soccer history as of now. His knowledge of the game on the pitch is unquestioned. But success on the pitch and success in the boardroom do not exactly correlate. Reportedly a “number of respected figures in American soccer” have encouraged Donovan to consider running, due to their concern with Sunil Gulati’s ability to deal with the technical side of the game.

All of these rumors spawn an important question: Is Landon Donovan even qualified to be US Soccer President?

Famous and legendary players have entered the boardroom and back channels of soccer for generations; maybe the most famous and notable of all of them would be now-deposed President of UEFA Michel Platini, whose career on the pitch is unmatched. Donovan ascending to the USSF Presidency after a storied playing career then wouldn’t exactly be unprecedented. But in U.S. Soccer, the Presidency has been held largely by lawyers or businessmen, who have turned a love for soccer or a not-quite-as-successful playing career into success in the boardroom.

Donovan has more success on the field than any of the past five USSF Presidents combined, but that doesn’t automatically qualify him to run U.S. soccer from the very top. The USSF doesn’t just control the Men’s National Team. It controls the Women’s National Team, youth levels of the game all across the country, sanctioning for leagues and coaches, relationships with leagues, and technical development — and that’s just on the soccer side. There’s a whole business to be run for the President of the federation, and Sunil Gulati’s position is unpaid. It takes some talent to bring the federation a $100 million surplus, and that’s exactly what Gulati has done, despite of his screw-ups on the technical side.

Can Donovan pull that off? Outside of his playing career, he’s been an analyst for Fox, is a part-owner of Swansea and has involved himself with San Diego’s fledgling bid for a MLS franchise. Those aren’t exactly the business qualifications that Gulati and his fellow presidents brought with them to the table. And if Donovan is being encouraged to run by these “number of respected figures in American soccer,” why wouldn’t he throw his hat into the ring? His reputation in U.S. soccer is unquestioned, and won’t be damaged in any way by a run for President. In fact, it may even be enhanced.

But if there are worried parties in U.S. Soccer about the degradation of the technical aspects of the game from the federation level, Donovan may well be better suited to take a job lower down or at another level of the game elsewhere where he could help fix the ills of U.S. Soccer and the way that the game is approached from a development standpoint. It’s quite possible Donovan would be a better Technical Director than President of USSF.

Sunil Gulati isn’t exactly a popular figure in U.S. Soccer circles right now, and for good reason. But that doesn’t mean that just anyone, especially stars on the pitch of days gone by, are immediately better options to replace Gulati in the upcoming Presidential election. Running a national federation is as much about business and building relationships at CONCACAF and FIFA as it is about the technical side of the game.

Perhaps a better delineation of responsibilities between the business and technical aspects of the game may suit U.S. Soccer better, but those lines would only become further blurred if Donovan somehow became President. As of now, lawyer Steven Gans, who has been a part of American soccer since the old NASL days, is the only candidate officially approved.

Donovan hasn’t officially thrown his hat into the ring yet, and may not ever. But just because he, or Eric Wynalda, or any other successful former national team star, may run for USSF President doesn’t mean they are qualified to run the entire federation and all aspects of it just because they were stars on the pitch.

There’s way more to the USSF than hiring a Men’s National Team coach.