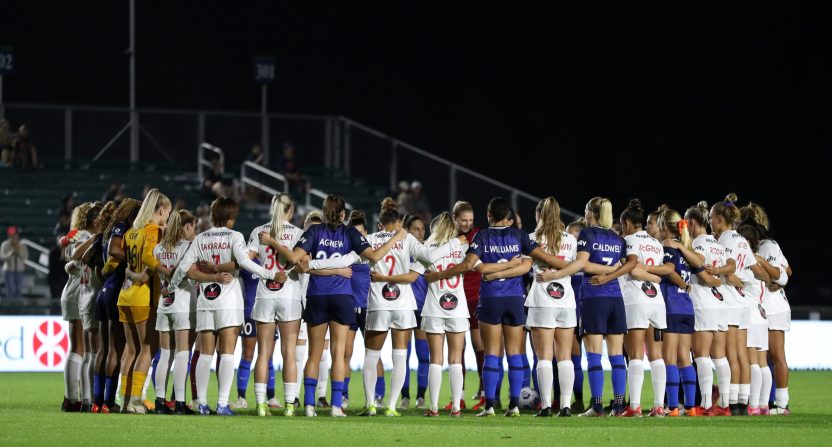 On Monday, a damning investigative report into the abuse prevalent in the women’s soccer world was released and the details were as gruesome and disgusting as many expected.

Via the New York Times, the report detailed “sexual misconduct, verbal abuse, and emotional abuse by coaches in the game’s top tier, the National Women’s Soccer League, and issued warnings that girls face abuse in youth soccer as well.”

The report was published one year after the players in the National Women’s Soccer League refused to take the field as an abuse scandal rocked the league and the sport while its leaders seemed unwilling or incapable of dealing with it. At one point, half of the 10-team league’s coaches had been alleged of abusive behavior.

The findings by law firm King & Spalding note that leaders of the women’s league and the United States Soccer Federation “failed to act on years of voluminous and persistent reports of abuse by coaches.”

“Our investigation has revealed a league in which abuse and misconduct — verbal and emotional abuse and sexual misconduct — had become systemic, spanning multiple teams, coaches, and victims,” Sally Yates, the lead investigator, wrote in the report’s executive summary. “Abuse in the N.W.S.L. is rooted in a deeper culture in women’s soccer, beginning in youth leagues, that normalizes verbally abusive coaching and blurs boundaries between coaches and players.”

Perhaps most disturbing is that the report details how many of the NWSL’s top executives and owners knew about the allegations, rumors, and reports but either chose to ignore them or obfuscate any investigation into them.

“Teams, the league, and the federation not only repeatedly failed to respond appropriately when confronted with player reports and evidence of abuse, they also failed to institute basic measures to prevent and address it,” Yates wrote, adding that “abusive coaches moved from team to team, laundered by press releases thanking them for their service.”

Among the reports and accusations are multiple accounts of male coaches abusing their power and authority to take advantage of players.

Former North Carolina Courage coach Paul Riley reportedly “leveraged his position” to coerce at least three players into sexual relationships” while investigators received “credible reports of sexual misconduct with other players.” Per the report, sexual misconduct allegations were brought against Riley every year between 2015 and 2021.

Former Chicago Red Stars Rory Dames is reported to have fostered a “sexualized team environment” as a youth soccer coach and that he “crossed the line to sexual relationships” in multiple cases, which the report says “may have begun after the age of consent.” Dames is also said to have joked about the age of consent for sexual activity with players.

And these are just some of the findings in the report that make your stomach turn. The full report is harrowing in its scope and in how little was done to protect players on all levels of women’s soccer from predatory coaches. And the reactions from the sports world reflect how shameful the situation has been.

Diving in to 319 pages. Half investigation, half recommendations.

Time to scrub the NWSL of these garbage men, and the people who enabled them. https://t.co/kJYs0XorJp

It is the fair thing to do, but it is also the safe, necessary thing to do, and it has to be done with speed. NWSL's failures have come from owners who are not qualified to own teams in a manner that those teams can function safely. That can't keep being the case.

A culture of abuse in women’s soccer, at all levels: https://t.co/u2lJBvGTdo

These findings are incredibly disturbing and hard to read. I remember a few comments that people in the organization made about Shim after she left in 2017, including whether she should get a championship ring. In retrospect, the negativity toward her feels a lot more concerning https://t.co/iLP8tg5XwH

Sad that these players had to go through all of this.

Glad to see daylight being shed on this.

You can read the full report here.