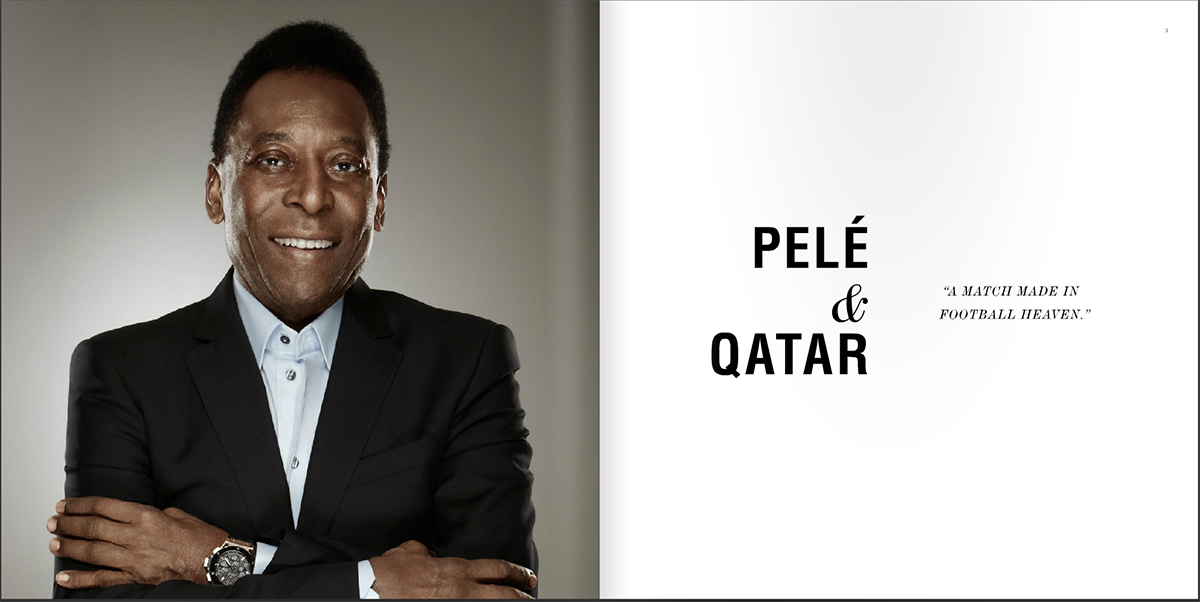 We’ve known for a little while that Pelé can be fairly shameless in his exploitation of his own brand.

In some ways, it’s hard to blame him. He cashed in during a 3-year, end-of-career stint with the New York Cosmos of the old North American Soccer League, where he was paid a total of $5 million for the 1975, ’76 and ’77 seasons, making him the best-paid athlete in the country at the time. But for the most part, the spoils of his own fame have eluded him. His brand rights were mismanaged for years, and he played at a time where professional sports was pretty much a middle class job, only with prettier women.

So now he’s making up for lost time. And cash.

But there are many unseemly things about the 253-page “book” that popped up all over the internet on Tuesday, in which Pelé is apparently pitching himself – through some slick production by his handlers – as an ambassador for Qatar’s World Cup.

But before all of that drudgery, the poorly-punctuated text very succinctly cuts to the chase. “This book has been designed to present the opportunity for Pelé to represent Qatar’s football federation and the country as they continue to grow their status in the football community in these essential years leading up to the World Cup,” it reads. “The aim of the partnership will be to put Qatar firmly at the forefront of world football. Pelé’s endorsement and partnership of not only the billion-dollar Aspire project [which develops young soccer players from around the world], and 2030 Vision [whatever that is], but a variety of sporting, cultural and media-based initiatives that will help to ensure the spectacle and legacy of the tournament are remembered and benefited from for many years to come.”

And then we get to the crux of it. In a passage titled “Pelé: Humanitarian Ambassador” it recounts his charity work and then claims “the Pelé endorsement means much more than just football and sports.”

The subtext here is plain. Qatar’s 2022 World Cup, in spite of being the first in the Arab world and by far the most ambitious edition in scope ever proposed, has suffered a torrent of bad publicity. There’s the sheer incompatibility of a World Cup with its climate, the cockamamie solution of air-conditioning the stadiums, and the subsequent move to November, which will wreak havoc on the club soccer schedule.

There are the persistent allegations that the World Cup was bought, which have gotten increasingly hard to refute as the majority of the FIFA Executive Committee that assigned that edition has resigned or been suspended in a haze of corruption.

And, of course, there are the inhumane conditions of the construction workers, who by many accounts are somewhere closer to slaves than decently-treated employees. Thousands of them are expected to die in the process of building all of the venues. Thousands.

Enter Pelé, whose team promises to apply a fresh coat of shiny veneer to a World Cup that has been dinged and dented and dragged through the mud. But by offering “the Pelé endorsement” which “means much more than just football and sports” the 75-year-old Brazilian looks very much like he’s trying to squeeze a few more millions out of a possibly desperate World Cup host.

This seemingly sordid ploy says as much about the Qatari project as it does about a famously opportunistic septuagenarian. That he would even attempt such a bold approach underscores the way Qatar has done business: it throws money at its problems. It hired Zinedine Zidane as an ambassador for its bid back in 2010 and whenever trouble has reared its head, it has simply spent big on slick PR companies in an attempt to alter the narrative, rather than fix the problems.

There’s probably a reason Pelé’s bid book is so light on text. Nothing much needs to be said.