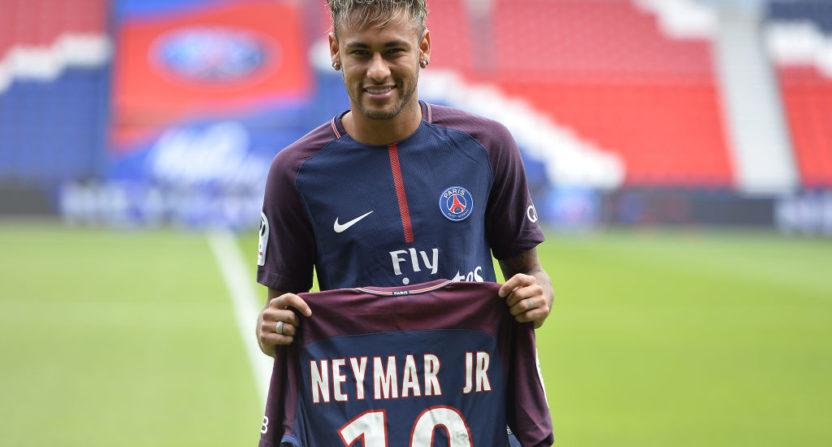 Paris St. Germain bought Neymar from Barcelona. You may have heard. It’s somewhat of a hostile acquisition, with PSG paying the full freight release clause to terminate his contract. The transfer fee, around $260 million, more than doubles what had been the previous world record transfer, Paul Pogba to Manchester United for $124.7 million. PSG’s total outlay to bring in the Brazilian star could approach $600 million.

Neymar won’t be the highest-paid soccer player in the world, but he will be close. The reported salary over the five-year deal will be about $40 million per year, after taxes. It was a move from the heart, obviously. The agents’ fees alone on this deal approach $50 million. Being Neymar Sr. is not a bad gig.

This is all for a player that one moron didn’t even rate among the world’s 10 best earlier this summer.

Neymar’s move is in another financial realm from any transfer we’ve seen before. It may be insulting to compare it to the lesser mega-transfers of years past. But it’s worth pointing out that many, if not most, of these gargantuan transfer fee deals do not work out as anticipated.

Cristiano Ronaldo is the gold standard. He left Manchester United for Real Madrid when he was 24 in 2009 for $112 million. Ronaldo would be the most impressive club soccer player ever, were it not for Leo Messi. He has scored more than 400 goals over eight seasons. He raised Real Madrid back to the elite level. He has won three Ballon d’Or awards. Real Madrid has only won two league titles with him, but the three Champions League triumphs in the past four years more than makes up for it.

That said, Gareth Bale has been a bit of a bust for Real Madrid since arriving for about $119 million from Tottenham. He’s been good, not great through four seasons. Some of that has been Ronaldo, who plays his best position and takes precedence on dead balls. Some of that is just not being able to find the field. Injuries have cost him significant portions of the past two seasons.

Real Madrid bought James Rodriguez, standout player of the 2014 World Cup, for about $95 million that summer. The Colombian has struggled even getting to the starting XI at Real Madrid. This summer, he is off to Bayern Munich to try his luck on a two-year loan deal.

We’d be remiss leaving out the other main component of Real Madrid’s Summer of ‘09 revamp. The club spent about $77 million to bring in Kaka. The then 27-year-old struggled with injuries and seldom found anything near his form from AC Milan when he won the Ballon d’Or and led the Rossoneri to a Champions League triumph in 2007. He went back to Milan in 2013. Since then, he has spent time with Sao Paolo and Orlando City SC in MLS.

Barcelona may be in for another mega-deal with the Neymar transfer cash. They have had a mixed record. Signing Luis Suarez for $97 million in 2014 has worked out well. He has scored 121 goals over three seasons. He has won a Champions League and two league titles. A hard-charging attacker and a lethal finisher, Suarez has been perhaps the ideal complement to Messi. Racism and biting people at random appear to be things of the past.

But one can’t forget the disaster that was Barcelona’s signing of Zlatan Ibrahimovic from Inter Milan in 2009 for $54 million in cash and star striker Samuel Eto’o. Ibra lasted one season in Catalonia, best remembered for epic feuding with Pep Guardiola. Inter, pocketing the money and the Cameroonian star, won the Champions League the next season.

What of the other super-duper club, Manchester United? It’s too soon to judge the Pogba transfer mentioned above. He had mixed reviews last season. Ditto for $100 million striker Romelu Lukaku, who just arrived. But we can comment on Argentine Angel Di Maria who arrived for $89 million in 2015. He hardly made an impact. That signing would have looked much worse if PSG had not popped up to buy him for $75 million the next summer.

Chelsea signed striker Alvaro Morata this summer for $77 million. They will hope the Spaniard pans out better than his $70 million countryman Fernando Torres, signed midway through the 2010-11 season. Torres, to be fair, did score 20 league goals for Chelsea. It just took him three and a half seasons.

Neymar will pay for himself to an extent. The international hordes will descend on PSG’s Champs-Élysées boutique to buy his jersey in no time. But, still, the only thing that will justify this stupendous expenditure is for him to lead PSG to the Champions League title. League titles won’t cut it when PSG enters the season as a 4/13 favorite in Ligue 1. Of course, what is more pressure to the man tasked with being Brazil’s savior in 2018?