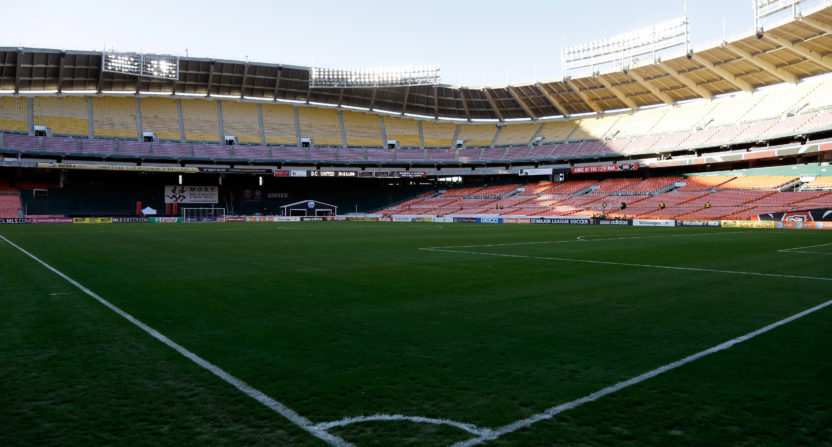 RFK Stadium in Washington, D.C. is dilapidated, old, dangerous, a hazard to your health, and yet one of the most treasured and fondly remembered stadiums in the entire country. While its NFL history ended long ago, its soccer history in many ways was just beginning. As DC United prepares to move three miles away to Audi Field next season, the soccer history of the United States’ only true “home” soccer stadium may be coming to a close. Even though the arena is more the butt of jokes than a fondly remembered fortress, RFK deserves its due as a hallowed hall of American soccer.

RFK has hosted the World Cup, Olympics, Gold Cup, numerous US World Cup qualifiers, MLS and the classic NASL. The likes of Beckenbauer, Cruyff, Beckham, Pele and many others have trodden on its too short grass. Aside from a brief stay from the Washington Nationals when they moved to DC from Montreal in 2005, RFK has been a soccer stadium in totality since the football team left for Maryland in 1997.

While many will remember all the great NFL moments when the wrecking ball comes, I, and many others, were too young to remember the Hogs, Joe Gibbs and Doug Williams. I, and those others, will remember RFK as the only true “national” soccer stadium in the US.

CONCACAF World Cup qualifying sees travel to exotic and bizarre stadiums such as Saprissa and San Pedro Sula, which are old, creaky, not quite safe stadiums with their own distinct character and intimidating atmosphere. In many ways, that’s what RFK conjures up. It’s old, creaky, not safe, leaks everywhere, more of a nature preserve at this point than a sports arena, and the stands shake violently when you jump. Isn’t that perfect for a national soccer stadium?

RFK’s main tenants were DC United, who made some pretty good memories of their own on the banks of the Anacostia in northeast DC. David Beckham’s MLS debut took place at RFK, which seems thematically appropriate in hindsight (complete with a Dave O’Brien soccer soundtrack, isn’t that novel?)

DCU has had many other remarkable moments in this stadium, but this stadium will be remembered more for the international games that graced the crumbling concrete. How about this insane goal from Saudi Arabia’s Saeed Al Owairan to beat Belgium at the 1994 World Cup?

But this stadium is, and always will be to me at least, a spiritual home for the US Men’s National Team. They’ve played more games at RFK than any other stadium, dating back to 1977. Its raccoon infested bleachers used to be a go-to hunting ground for the US during World Cup qualifiers, even when the Yanks were outnumbered.

How about the emotional night in 2009 after Charlie Davies’ horrific car accident, when the US was down 2-0 to Costa Rica, only for Jonathan Bornstein to level in stoppage time to break Costa Rican hearts?

Wasn’t it fun when the US could do that to other teams? Or the Centennial Match from 2013 when the US beat Germany 4-3 in a track meet?

RFK also saw the US beat Mexico 4-0 in 1995, and not many other stadiums across the country can say they played witness to that.

The last USMNT game RFK played host to was last fall, when the USMNT limped to an uninspiring 1-1 draw against New Zealand. The USWNT did one better and lost 3-0 to France in the SheBelieves Cup this past March. Those cannot be the last national team games played here. Sure, there are nicer, more comfortable and safer stadiums around the country to play in, but none have the character and the stories to tell that RFK did. From Cruyff and the Dips, to DC United and their amazing dominance of early MLS, to becoming the US’ spiritual home in international soccer, RFK holds a special place for soccer in this country, and should be remembered as such.

DC United are finishing up a disastrous season, so aside from their last game there coming against the Red Bulls, the game itself isn’t that notable. But RFK may be totally shutting its old doors to soccer, and that is a bit bittersweet. Sure, being stung by wasps while trying to write a gamer isn’t fun, but patrolling its leaking corridors with a raccoon friend or two is something that could only happen at RFK. And the stories it has to say about the soccer it has paid witness to will last for generations.

As one era of US Soccer comes to end, its fitting that RFK probably goes with it. As the sport in this country moves to a new level and resets after its recent disasters, the old spiritual house for the game in this country as it went from niche to mainstream is going to go with it. RFK deserves one more US game before it meets the wrecking ball that has long needed to hit it, but to watch this old stadium shut its doors to the sport that has kept it breathing long past its sell by date is going to be a tough ask.

RFK is a dump. It’s dangerous and ridiculous. But it’s a place where soccer rose to prominence in this country, and should be remembered as such.