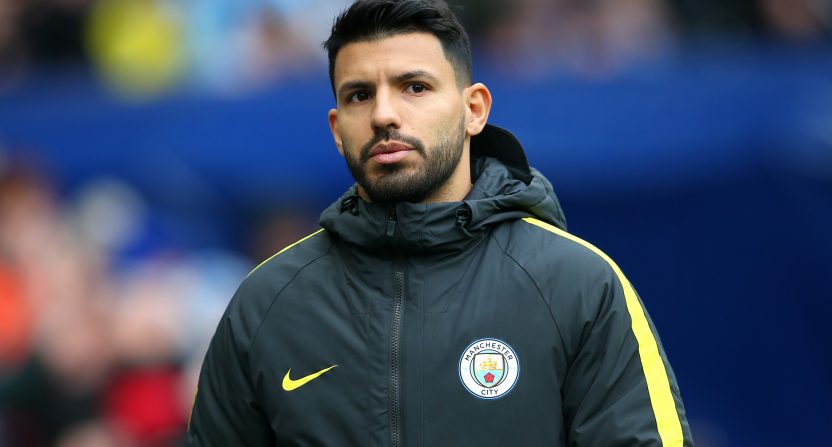 A couple months ago, the mere thought of Sergio Aguero losing his starting spot as striker at Manchester City would have been unthinkable. Sure, Pep Guardiola would bench Aguero on occasion when they had midweek Champions League games. At the same time, Aguero has 18 goals already this season and is one of the best strikers in the world. Surely, Aguero would be starting.

That was until a few weeks ago and Manchester City paid £27 million ($33.6 million) for 19-year-old Brazilian Gabriel Jesus. Meant to be a backup for Aguero, along with fellow backup Kelechi Iheanacho, Jesus has quickly gotten used to English soccer. In three consecutive starts, Jesus has scored three goals, including twice in Sunday’s 2-1 win over Swansea.

Because of Jesus’ incredible start, it has sparked rumors that Manchester City’s top goalscorer could potentially be expendable and the 28-year-old could be on the market. The BBC reports that Manchester City isn’t planning on selling Aguero but Guardiola is prepared to keep Jesus in their Starting XI if he can keep up his goalscoring form.

Obviously, this is a great problem to have if you are Guardiola. You just signed a 19-year-old to be the future of the team and he is immediately lighting up the Premier League. You have one of the best strikers in the world at your disposal to start or come off the bench. And if for some reason Guardiola wants a change of pace, he can play Iheanacho, who has scored 20 goals in 30 shots on goal in his Manchester City career.

As of now, Aguero is okay with starting on the bench.

“In these [next] three months I have to help the club and then they will decide if I have a place here or not.”

“In three years my contract is up. That’s why I say I’m happy at the club,” said Aguero.

“When you’re on the bench you have to wait for your opportunity. I have three months to do my best and try to help the team. Then we’ll see what happens with my future.”

At the same time, Guardiola has said that Aguero will be “playing a lot of games” over the next three months until the end of the season.

But while this situation remains publicly harmonious between Aguero and Manchester City, this could turn ugly at any point for both player and team.

Aguero is 28 and if he has three years left on his contract, I’m pretty sure Aguero wants some assurances that he will get the majority of the playing time. Because if he goes until the end of his contract, that would make him 31 and would be looking for a new deal at the beginning of the downturn of his career.

Manchester City will also need to figure out who will be starting and it’s better they do it by this summer. If it’s Aguero, Jesus can be on the bench, play in Cup competitions and develop more rather than take the striker role for a top English team. If Man City decides to go with Jesus, they can sell Aguero this summer and get top dollar for him, rather than wait around and sell him for far less.

The best solution would be to keep going with Manchester City’s original plan and give Aguero most of the playing time. Then make Jesus and Iheanacho the second and third strikers. If you sell Aguero now, you immediately put all the pressure on Jesus. That could be risky as it’s not smart to do that without a backup option behind him. Especially after he has only played three times so far and the possibility of the British media can pick apart certain players for the simplest of things. Raheem Sterling can fill him in on some of that.

Gabriel Jesus is a great signing and someone who is likely to make a big impact on Manchester City at some point. Maybe it’s even a good idea to leave Jesus as the starter right now to ride the wave of his form. But at the end of the day, Manchester City knows that Sergio Aguero is the person to lead the team to trophies right now. And Jesus will provide for great depth at the striker role. In this situation, everyone remains happy.