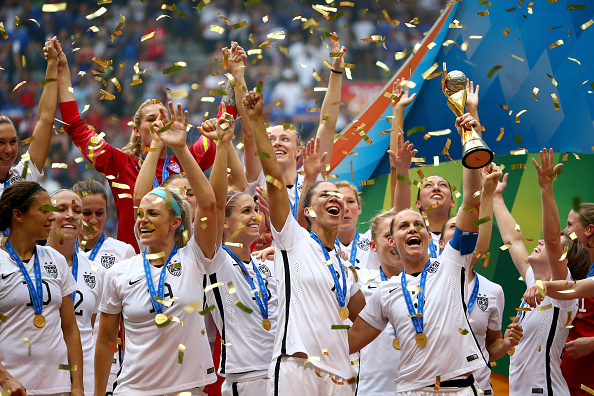 According to FIFA, there are 265 million people on the planet actively playing soccer, and there are hundreds upon thousands of clubs at all level of quality and skill filled with those players from all reaches of the globe. Professionally, there are wsay more than 10,000 games played each year, just in the top leagues in each nation, and that doesn’t include all the international competitions run by FIFA and its member federations. The point is, there are a lot of games played at a very high level around the world each year. Here is a look at 15 of the best and most memorable matches in 2015, with admittedly an American point of view.

The Gold Cup Final was known as the beginning of Mexican dominance in CONCACAF this year. While they got off to a slow start, Mexico dominated the game after they finally scored and cruised to their 10th Gold Cup title, winning 3-1.

In the highest scoring game of the MLS season, D.C. United and Real Salt Lake went through a topsy-turvy ten goal thriller, culminating with Nick DeLeon burying an upper 90 strike in the 85th minute to cap off the 6-4 win over RSL.

With a great open goal by Sebastian Le Toux and a spectacular strike by Krisztian Nemeth, the 102nd U.S. Open Cup Final ended with an eight round penalty kick shootout. In some of the best penalty kick taking you will see, 22 year old Jordi Quintilla went the safe route and kicked in one of the slowest penalty winners in soccer history. The win gave Sporting KC their second U.S. Open Cup title in four years (2012) and third title (2004) overall. For Philadelphia, it was their second consecutive U.S. Open Cup Final loss at home.

A game that still brings up bad memories for U.S. Men’s National Team fans, Mexico outpowered the USMNT all game and despite two equalizers, Mexico scored in the 118th minute to win 3-2 and go to the FIFA Confederations Cup.

The Liga MX Apertura Final was played over two legs, so we’re focusing on the second leg. In one of the greatest comebacks in soccer history, Pumas overcame a 3-0 loss in leg one to make it 3-3 in the 87th minute. As regular time ended, Eduardo Herrera was sent off and Pumas had to play extra time a man down minutes after equalizing. After Tigres scored and had a player of their own sent off, Pumas equalized once again in the 119th minute. But in the end, it was one too many comebacks for Pumas to handle as Tigres held on to win 4-2 in penalties.

If you ignore the scoreless 120 minutes previously played, the penalty shootout provided a happy ending to the Chilean fans as they saw their team win at home for their first ever Copa America win. The result was also important because it denied Lionel Messi his first trophy playing for the Argentina National Team.

2015 started with a bang as Tottenham and Chelsea went into a thrilling back and forth game. In the end, Tottenham gave Chelsea their second loss in their 2014-15 league winning campaign by winning 5-3. It wouldn’t be Chelsea’s only loss of the year.

Alessandro Florenzi provided one of the goals of the year as he not only scored from midfield, but he scored from the sideline at midfield against Barcelona. In a lapse of concentration, Marc-Andre ter Stegen got a bit too far out and that was enough for the right back to score an incredible goal and preserve the 1-1 draw.

2015 was the year women’s soccer went mainstream in England. Sure, women’s soccer in England isn’t met with the same interest now than six months ago, but this was the first time many in England finally took notice of their team. When Laura Bassett unfortunately scored an own goal at the end of the game that sent Japan to the Women’s World Cup Final, the English fans uncharacteristically supported her in most likely the worst moment of her professional soccer career.

The goals sure flowed in this game. A nine goal thriller in which Bayer Leverkusen refused to give up until the final whistle blew. Everything seemed over when Wolfsburg got out to a 3-0 lead after 29 minutes, but Leverkusen fought back. Heung-Min Son scored a hat trick within 11 minutes and despite another Bas Dost goal for Wolfsburg, Leverkusen kept it up and equalized 4-4 in the 72nd minute. After Emir Spahic received his second yellow and left Leverkusen down a man, Wolfsburg and Dost scored for his fourth goal of the game and gave Wolfsburg the 5-4 win just before the game ended.

This game had it all. Each team had to come up with an equalizer as Sporting KC had to equalize at the end of regular time and Portland had to equalize at the end of extra time. After 120 minutes, the teams engaged in an epic penalty kick shootout involving all 22 players to take a penalty (including the goalkeepers). The shootout will be most remembered for Saad Abdul-Salaam’s incredible miss as he hit both posts with the same shot and the ball ran over, but not crossed, the entire line. The miss kept Portland alive and advanced 7-6 after Adam Kwarasey saved fellow goalkeeper Jon Kempin’s penalty. But Portland fans will always remember Abdul-Salaam’s miss. The Timbers were literally inches from being eliminated and would not have even been in the MLS Cup Final, much less win. Those are the kinds of things you remember in a championship winning season.

It’s pretty tough for both teams to give up a two goal lead in the same game but Bayer Leverkusen and Roma did just that last October. After Leverkusen went up 2-0 in 20 minutes thanks to Javier “Chicharito” Hernandez, Roma spent the next 55 minutes putting up four goals to go from a two goal deficit to a two goal lead. And then just when Roma had all the momentum, Leverkusen scored in the 84th and 86th minute to earn the 4-4 draw.

Four goals were scored after the 80th minute. When Everton scored in the 95th minute to lead 3-2, they had the win in the bag. But the visiting Everton fans got a little ahead of themselves and ran on the field at the Vitality Stadium. Because of the mini invasion, the game extended and Bournemouth equalized in the 98th minute to give the Bournemouth fans the last laugh.

2) UEFA Champions League Round of 16 – Chelsea vs. PSG

Chelsea faced Paris Saint-Germain in the second leg of the round of 16 and after scoring in the 81st minute and taking a 2-1 aggregate lead, it looked like PSG had no shot at coming back. Keep in mind, this was when Chelsea was running away with the Premier League and had already won the Capital One Cup and were looking at a continental trophy to add to the collection. PSG had other ideas as a pair of Brazilians, and a former Chelsea player, sunk Chelsea’s hopes in Europe. After Gary Cahill scored in the 81st minute, David Luiz quickly equalized to send the game into extra time. And then in extra time, after giving up a penalty, Thiago Silva composed himself and scored in the 114th minute, allowing PSG to advance on the away goal rule. Oh yeah, and this all happened as Zlatan Ibrahimovic was sent off in the 31st minute, leaving PSG to play down a man, and arguably their best man, for the final 90 minutes.

An absolutely incredible game. This game will be remembered in a number of ways but it’ll mostly be remembered for Carli Lloyd’s hat trick in 16 minutes, culminating with a blast from midfield to put the USMNT up 4-0 by the 16th minute. Once it was all said and done, the USWNT won 5-2 over Japan and avenged their Women’s World Cup Final loss to Japan four years earlier.