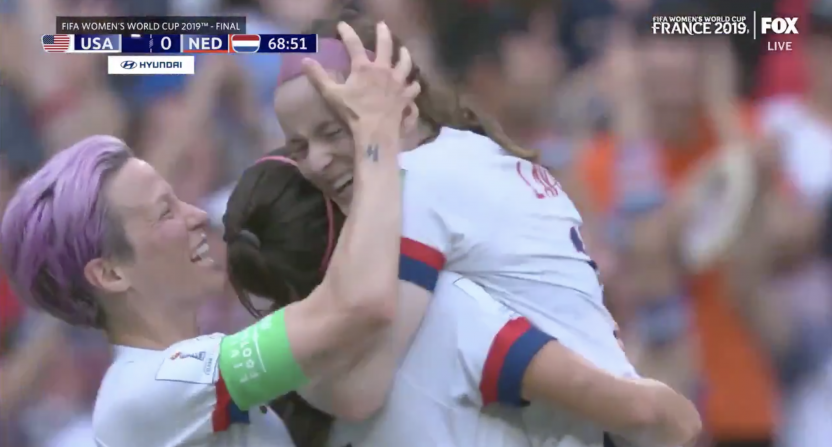 The 2019 FIFA Women’s World Cup may have been the USA’s toughest test but great teams pass with flying colors and that’s what these 23 women did. Scoring a team record 26 goals, including two in the final, the United States Women’s National Team defended their title with a 2-0 victory over the Netherlands.

With the victory, USA head coach Jill Ellis became just the second coach to win multiple World Cup titles (Vittorio Pozzo for Italy in 1934/38) and remains unbeaten at the World Cup (13-1-0). It is the USWNT’s fourth World Cup title out of eight tournaments and the first time they have successfully repeated their title.

The first half was ‘The Sari van Veenendaal Show” as the Dutch goalkeeper protected the goal and kept the United States scoreless. The first was the result of a bit of trickery as Tobin Heath headed in a Megan Rapinoe corner. And then off another corner, Julie Ertz sent in a strong shot that was saved by Van Veenendaal.

First corner of the game for the @USWNT and instant danger in the box, but Van Veenendaal smothers it in the end. #FIFAWWC pic.twitter.com/EZ03T2EkRx

ERTZ! Second corner for the @USWNT falls to @JulieErtz, who takes it on the half volley but it's right at Van Veenendaal.

Best chance of the final so far! #FIFAWWC pic.twitter.com/lmEAAgUMih

Then as the game neared halftime, Van Veenendaal had some help with the post to deny Alex Morgan while making a diving stop on a curling Morgan strike just one minute later.

Van Veenendaal is putting on a show! 🇳🇱

The Netherlands goalkeeper makes another fine save on Morgan, and this #FIFAWWC final is goalless going into halftime. pic.twitter.com/5DDVyVjZQH

The first half ended on an unfortunate note as Kelley O’Hara and Lieke Martens collided heads. Needing medical treatment, both took a while to get up and while Martens would continue in the second half, O’Hara was subbed out for Ali Krieger when the half began.

The Netherlands held strong but it was an attempted clearance that wound up being a high kick to Morgan’s chest that became the turning point. Stefanie van der Gragt was going for the ball but kicked Morgan and it was originally not called for a penalty. After VAR, referee Stephanie Frappart overtuned her original call and awarded a penalty. It wasn’t the best penalty taken by Rapinoe but it delivered and she put the United States in a 1-0 lead.

The USWNT felt a bit more comfortable with the lead and in the 69th minute, Rose Lavelle marched down the middle of the pitch, played around with the defender and curved her shot into the lower right corner of the goal to double the lead and finish off the Dutch.

Despite the loss, Netherlands shouldn’t feel discouraged from this setback. These are the European champions, with youth on their side. This is a dangerous team who will be a thorn in the USA’s side for at least the next decade. I wouldn’t be surprised to see the Dutch not only be there for the 2023 final but possibly for the 2020 gold medal game at next year’s Olympics.

For the United States, well in a quarterfinal featuring seven European sides, it was the lone non-European side who prevailed. Someday, they won’t be the overwhelming favorite and while we like to keep predicting it happening, it’s not happening today. For on this day, the United States of America is on top of the soccer world.