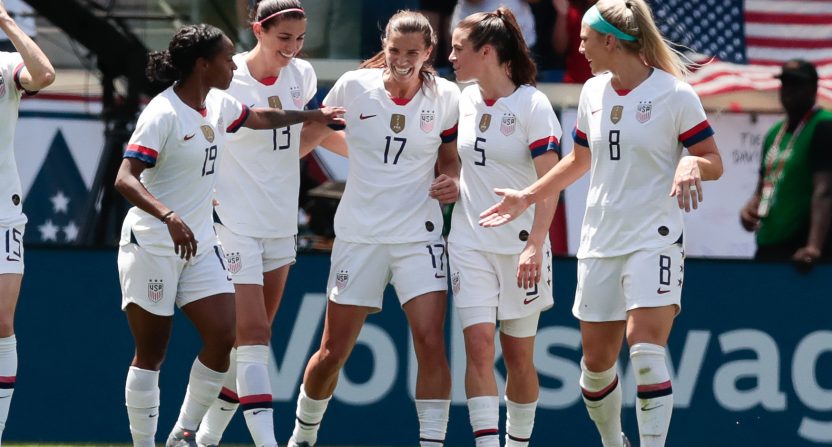 I know it seems like everybody says this every four years, but this upcoming Women’s World Cup will be the most difficult tournament ever for the U.S. Women’s National Team. I said this in 2015, and the United States still won. But while they remain odds-on favorites for 2019, the United States won’t be the favorites at the World Cup one of these years.

This is due for reasons within and beyond the USWNT’s control. Since the first World Cup in 1991, the USWNT have been on top. In seven World Cups, the United States have won it three times, finished runner-up once, and finished third three times.

Instead of two or three teams who could win the World Cup, there are six teams who could realistically find themselves in the final. And for the United States to win, they may need to go through the toughest road in World Cup history to get there.

One good thing for the USWNT is that their draw gave them a better travel setup and a relatively easy group. Until the semis, the United States get to stay in northern France. But that also means the USWNT will have a potentially hellacious knockout stage.

If the USWNT is to win Group F against Sweden, Chile, and Thailand, that will set them up against the runners-up in Group B for the round of 16. That will likely either be China or Spain which, even though they could put in a shock win, the United States should beat either team.

A win in the quarters would lead the USWNT to a potential semifinal against the winner of Group D, which would likely be fourth-ranked England. An England team who has painful memories of their own goal at the 2015 semifinal and will no doubt want redemption.

Let’s say the United States gets through the hosts and then defeats England, the final could potentially be against second-ranked Germany. The German side of the bracket is relatively calm given their toughest opponent on that end will be either Canada, Australia, or the Netherlands. Three teams who are good but are not on France or England’s level.

So unless there’s a colossal shift in group stage winners, the United States will potentially need to defeat France (third), England (fourth), and Germany (second) to win their fourth World Cup. It’s not an impossible task but that’s asking a lot, even for these women.

The oddsmakers still have the United States as a 7/4 favorite (according to SuperBook) with France at 7/2, and Germany at 11/2. Based on the path teams are likely to take, Germany is set to have an easier path to the final. But things change very quickly, and it’s not a guarantee the United States has to undergo this onslaught. These games are played on the field and not on paper. Still, it’s going to be difficult for the USWNT to repeat as champs, and it may be even more difficult in 2023.

The World Cup begins on Friday, June 7 with France vs. South Korea. The USWNT begins their World Cup path Tuesday, June 11 against Thailand.