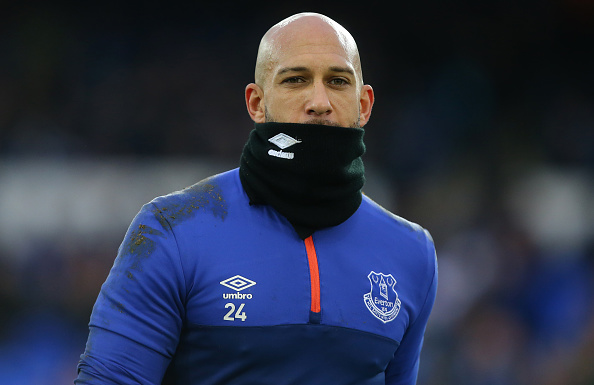 Tim Howard, the American hero goalkeeper alternately described as “a leader of men” (by fellow U.S. national teamer Kyle Beckerman) and the U.S. Secretary of Defense (by a hijacked Wikipedia page) is apparently coming home.

He is under contract with Premier League head-scratchers Everton, where he is in his 10th season, through the 2017-18 season – for another 2 ½ years, in other words – and it was widely believed that he’d hang up his gloves after the 2018 World Cup, should he still be on the national team then.

It’s been more than a dozen years since Howard overcame Tourette’s Syndrome, thrived with the New York MetroStars and earned a place with Manchester United. And according to various reports, he has been itching to return stateside for a few years now. The time might be right. Toffees manager Roberto Martinez has stuck by his 36-year-old net-tender, but there’s a convincing argument to be made that Howard’s prime is behind him.

Which isn’t to say that Major League Soccer should be a place where stars whose value in Europe is declining should play out their soccering days. That’s a different discussion for a different column, if it must be had at all. It’s more that Howard’s name still carries tremendous cachet and that if he returns to the league now, he can do so on his own terms.

The team he has been persistently linked with the last few weeks is the Colorado Rapids, a rumor that has gained strength as the Denver club made several moves that could well be interpreted as preparing the land for Howard’s arrival – trading away the starting goalkeeper; moving to the top of the league’s allocation order. This move may not be an obvious one from appearances, but it makes eminent sense.

The Rapids aren’t exactly an elite MLS team, nor do they play in a major market. But Howard’s options might be limited. The rich teams in the big markets are all saturated with designated players already, meaning they have neither the cap space nor likely the money to accommodate his contract demands. Howard is believed to be on a multi-million dollar salary in Liverpool, and with more than two years left on his contract, it’s unlikely that he’ll be eager to take too much of a pay cut. Nor should he have to, but that too is a different matter.

On the other side of that deal, Everton could be freed of his not inconsiderable salary, by Premier League standards, and hand the job to 25-year-old understudy Joel Robles. Indeed, Martinez has said there’s no telling if Howard will return next season – “impossible to say,” were his exact words.

Meanwhile, the Rapids have backslid into one of the league’s moribund teams since winning the championship with some luck in 2010. They’ve missed the playoffs three of the last four years and attendance and market traction have stayed fairly flat as most other teams have grown. The club could use a little buzz, especially with the Broncos in the Super Bowl and hogging all the bandwidth.

But for such a deal to get done, MLS would need to pretty much suspend a long-standing policy of not giving real money to goalkeepers. It plainly doesn’t think paying big for a very good one will offer a return on investment. And in fairness, there really are very few goalkeepers who can get fans sufficiently excited to generate revenue beyond their accomplishments on the field. These are considerations MLS still needs to make when it assesses a player for an above-market rate deal.

Howard, however, for his mainstream crossover and off-field appeal – remember how many magazine covers he was on after the World Cup? – is an outlier. And considering that he’s the last truly needle-moving national teamer an MLS club could bring home, he could be well worth the money.

As for Howard himself, after nine seasons as the undisputed starter at Everton, his run may soon be coming to an end. At his age – which is hardly geriatric for a goalkeeper, but still fairly advanced – he’d have a tricky time finding a new club in Everton’s echelon and becoming the number one there. And he’ll need to keep a steady starting job if he aspires to line up between the sticks in Russia in 2018. As such, his best bet might be MLS.

For Howard, Everton, MLS and the Rapids, it could be win-win-win-win.