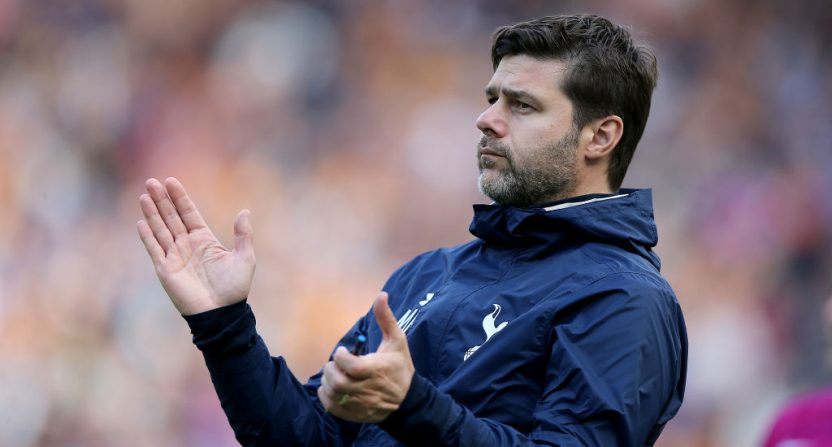 Tottenham manager Mauricio Pochettino whipped fans into a frenzy Sunday afternoon. In his press conference following Tottenham’s 2-0 loss to Crystal Palace, the second cup competition Spurs were eliminated from this week, Pochettino said he doesn’t believe that trophies take clubs to the next level, rather it’s more important to finish in the top four (and qualify for the Champions League).

Poch: "Again we’re going to have the debate whether a trophy will take the club to the next level. I don’t agree with it. It only builds your ego. The most important thing for Tottenham right now is to always be in the top four." https://t.co/3hgLtsj6eX

Is Pochettino wrong about that? No. But is he right? Also no. Both can be true!

Tottenham was a smaller club who crashed the Champions League party that in English football had been dominated by the ultra-wealthy and historically elite clubs. Not only did they crash the party, they firmly etched themselves there. They’re punching above their weight-class, and if they want to continue to do that and remain one of the “big six” PL teams, they need to stay in Champions League.

But trophies are the pinnacle of football, for both players and fans. Cup finals are a special occasion. Winning a trophy, and the celebrations that come with it are things that fans will remember for years to come. Players play to win trophies, and if the ambitions of the club don’t match those of the players, the player will find a club that does.

Right now Tottenham are in the midst of a massive injury crisis. Their stars Harry Kane and Dele Alli are out indefinitely. Their best deputy for Kane, Heung-Min Son, has been on international duty but will come back soon. Their central midfield has been battered by injuries and their depth is basically non-existent.

We’ve basically known a situation like this was going to happen. Tottenham, who already had a thin squad, didn’t sign any new players last summer. With Tottenham building a new stadium, that has been marred by delays and more delays, there were questions about whether they had money to sign players. Those questions have now essentially been answered.

Pochettino’s statement drew laughter from opposing fans because it sounded an awful lot like when former Arsenal manager Arsene Wenger famously said finishing in the top four was like winning a trophy. Wenger, and Arsenal fans, were mocked for years about this statement, but Tottenham better be careful because their situation is a lot more similar than you’d think.

Thirteen years ago Arsenal built themselves a big new stadium. It was a necessary expenditure and the long-term benefit has been a tremendous revenue stream for the club. (Whether the owner puts that money back into the team or not is a different story).

In building that stadium, Arsenal took on a lot of debt. When the stadium was finished and it came time to re-pay that debt, the club found themselves strapped for cash. Just a few years removed from “The Invincibles” and being a club that regularly competed for the Premier League title, Arsenal were selling their best players.

The timing for Arsenal wasn’t great. Chelsea had just gotten a new oil-rich owner who was pumping millions into the club. A few years later Manchester City did the same.

While Arsenal couldn’t compete with those clubs in the transfer market, what they didn’t do was stop signing players.

When they lost a player like Thierry Henry, Patrick Vieira, or Alexandre Hleb, in stepped Cesc Fabregas and Robin van Persie. They signed young players with high ceilings as well as overlooked, ready to play vets on the cheap. Samir Nasri, Aaron Ramsey, Andrei Arshavin, Thomas Vermalen, Laurent Koscielny, Hector Bellerin, Alex Oxlade-Chamberlain, and Mikel Arteta all joined the club at this time.

This is a period of time that Wenger simply does not get enough credit for. There were bigger names out there who were signing for Chelsea and Manchester City, that didn’t sit well with the fans. What Wenger was doing was keeping the pipeline fresh. The above is just a small sample of who he brought in, because not every young player panned out, but if you load up on enough, then when the team is ready to spend money, they’ll have a young core that’s ready to play.

To a degree, this plan worked. When Arsenal were finally able to spend money (splashing it on Real Madrid and Barcelona players Mesut Ozil and Alexis Sanchez) they won three FA Cups in four years and kept a top four streak that lasted 20 seasons.

On the other side, they were also found out. Players they developed left the club because the “finishing in the top four is more important than anything else” philosophy wasn’t ambitious enough for them. Other teams were willing to pay them more. Eventually the pipeline dried out. You can only develop so many Cesc Fabregas’s and Robin van Persie’s. You’re going to swing and miss on some guys.

Despite seemingly having money available (again, the owner), Arsenal haven’t jumped back into the transfer market. In the last few years, the price of players has exploded and Arsenal have stayed pretty on brand. They’ll spend money on good players if they deem the value is there, but they aren’t going to get into exorbitant bidding wars.

That’s where Tottenham should be worried. Even if they survive this stretch, do we really expect them to start throwing money around when it becomes available?

Like Wenger, Pochettino probably isn’t getting enough credit for the job he’s done over the past four years. He’s built a squad with very little resources and firmly placed them consistently in the top four.

However unlike Wenger, he hasn’t kept the pipeline going. In the past four years Tottenham’s net transfers have turned a £7.35 million profit. That means that for everyone who has come in, more players have left. Of the five signings Tottenham made last year, only Juan Foyth can possibly be considered a long term prospect.

Despite the ‘sky is falling’ atmosphere surrounding the club this past week, things could be worse. Since Harry Kane’s injury, Spurs have dropped zero points in the league. They’re still in third and I’d still fancy them to finish in the top four this year.

But is that enough? Players at Arsenal weren’t content with winning three FA Cups in four years. They didn’t think the club was ambitious enough to compete for bigger trophies. The FA Cup may only be the third most important trophy but it’s still a trophy. What are your players going to think when you’re not winning any trophies?

Despite the opportunity to play in the Champions League every year, players are going to leave. Who is going to replace them? Academy graduate Kyle Walker-Peters hasn’t been impressive. Harry Winks has proven to be completely adequate, but he can’t carry a Champions League team right now.

Dele Alli cost this club £5 million, shouldn’t they have been signing other teenagers with high ceilings for a similar price every year? Most of them wouldn’t pan out, but if one or two of them did? You’re suddenly in a much better situation! And when the time comes where they may leave for another team, you have a massive profit from that player. As the saying goes, “You have to spend money to make money.”

Instead, Tottenham are left in purgatory. They’ll probably hit their short term goal of qualifying for the Champions League, but eventually this is going to run out. And when it does, what happens next?