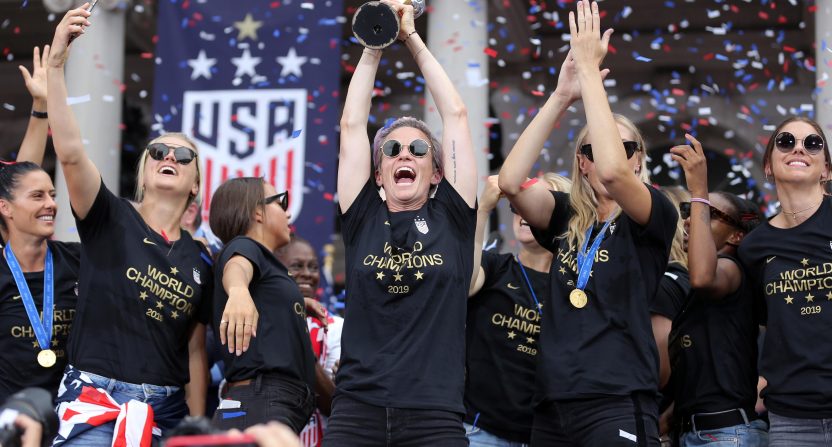 The ongoing U.S. Soccer battle to avoid paying the women’s players equal to the men’s players took another turn recently with federal legislation introduced that would require them to do so. In response to that, the United States Soccer Federation has hired lobbyists in preparation for a political battle, which is exactly as tone-deaf as it seems.

Politico reported on the presentation those lobbyists are apparently giving to lawmakers, and it’s certainly something.

The lobbyists circulated a presentation, obtained by POLITICO, in meetings late last month that emphasizes the benefits the women’s team players receive — including a guaranteed salary, maternity leave, a nanny subsidy and health, retirement and injury protection benefits — that players on the men’s team do not.

The presentation states that the women’s team was paid far more than the men’s team last year, earning $275,478 in average cash compensation per player, compared to $57,283 for the men’s team.

That U.S. Soccer continues to peddle these bad faith arguments and is willing to engage lobbyists to do so, in the face of the fairly overwhelming success and popularity of the USWNT (winning a second World Cup in a row is a hell of a leverage play), is truly a fascinating display of likely self-immolation. Pointing out that the USWNT players have benefits like maternity leave as an example for why they don’t deserve equal pay is a joke. Women don’t get docked a base salary at any corporate job with benefits including maternity leave.

Even ignoring the lack of an apples to apples comparison for the team’s earnings in 2018 (a year in which the USMNT played zero competitive matches thanks to missing the freaking World Cup, which you’d think would factor in more here!), it also ignores that without the federation paying a base salary the men don’t receive, there would be no USWNT. Women’s professional soccer has made some strides, but even in comparison to the sometimes paltry salaries paid to MLS players, the game isn’t there yet.

That money is necessary, and it’s an issue men’s players don’t have to deal with, and therefore a separate issue from the pay gaps the USWNT has highlighted. And all of this ignores reporting that the women’s team has generated more revenue than the men’s program of late. It’s also ignoring the horrible PR look here, wherein the federation is fine spending what is almost certainly an obscene amount of money on Washington lobbyists but not on equalizing their pay structure.

Molly Levinson, a spokeswoman for the women’s team, said in a statement they were “stunned and disappointed” that U.S. Soccer “would spend sponsor dollars and revenue to advocate against laws that ensure that women are paid equally to men.”

“If instead of paying lawyers and lobbyists to litigate, arbitrate and lobby against current and former players and just about everyone else in the sport, they instead negotiated in good faith to enter agreements to advance soccer in the US, we would all be in a better place,” the men’s national team’s players association said in a statement to POLITICO.

It’s tough to see how this ends in any way other than U.S. Soccer admitting they were wrong and fixing the issue. The only real drama left is seeing how much they’ll debase themselves first.