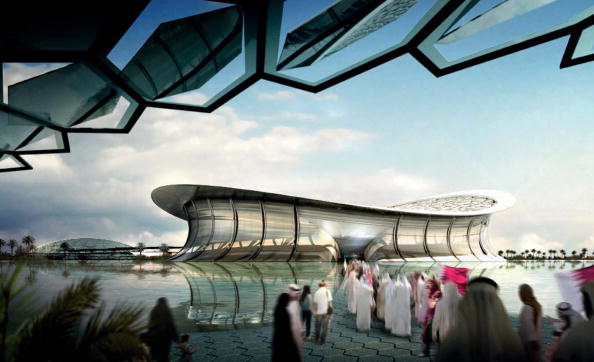 There’s a frustrating disconnect that happens for events like the World Cup or Olympics. Countries that should probably be putting their full efforts toward infrastructure, health care, and the betterment of their people instead throw billions of dollars into construction stadiums and hotels to accommodate a one-time event that may or may not have any positive impact of their economy. Just ask Brazil if it was better to invest all that money in stadiums that sit empty as its economy and people struggle.

It’s not uncommon for bribery and other crimes to be at the heart of these bids, such as the ones that allegedly helped Russia land the 2018 World Cup and the ones that helped Qatar land the 2022 World Cup. Both places are human rights nightmares undeserving of any fanfare and financial windfall they’ll receive from these events. Certainly, it hasn’t been as bad as expected in Russia during the tournament, but saying so presumes you have a number of gay-bashing attacks you’re okay with happening under a certain threshold.

But if Russia’s track record is considered merely problematic, Qatar’s record is a downright nightmare. Many of the stadiums where games will be played in 2022 will have been built by indentured servants and slaves. In fact, people have literally died building these soccer stadiums. The nation has been accused of allegedly funding terrorist organizations. Any LQBTQ fans should have legitimate concerns about traveling to the country and expressing themselves. Same goes for women considering Qatar’s restrictive dress codes and societal status compared to men.

Of course, the tournament will still be played there. And of course, millions of soccer fans will swarm there from around the world. And of course, few players, if any will speak up about what’s happening there or refuse to play. We only care so much, especially when sports are involved. We’ll speak out and protest and make demands but when it comes to taking a stand at the risk we’ll lose out on a sporting event, we all get awfully quiet really quick. #StickToSports writ large.

It’s with all of that in mind that reading the latest blog post from USA Today’s Martin Rogers feels quite a bit like you’re reading an advertorial paid for by the nation to promote 2022. In fact, it’s a bit confusing to find out that, as far as anyone can tell, it’s not. Even the title, “Qatar is the World Cup every fan should attend,” feels so much like a paid suggestion that you’d almost imagine an ad agency rejecting it for being too on the nose.

…If you’re a soccer fan with an appetite for one day witnessing the World Cup in person instead of from the comfort of the couch, stick the next tournament, in four years’ time, down on your calendar.

Etch it onto your bucket list. Tell everyone you are going. Start saving up the pennies. Be ready when the sales period for game tickets opens.

Because the next World Cup is likely to be the most fan-friendly that we’ve seen for a long time, perhaps ever.

Forgetting everything we’ve just discussed, we can let the opening slide. But it’s the next part where things go off the rails.

Yes, it is in Qatar. And yes, it is very possible that you have heard some not very nice things about Qatar. One, that it has oppressively brutal heat. Two, that you can’t get a beer there. And three, that some of its politics and policies are a little on the repressive side.

It’s true that people have heard “some not very nice things” about the country, though while the heat and the beer are among them, they are not, in fact, the “least nice things” we’ve heard. As for Qatar’s politics and policies being “a little on the repressive side,” that’s quite the understatement.

Quickly, the real problem with the column becomes clear. It’s coming from a perspective that privileged as hell. Rogers talks about how the stadiums are close together and there will be an Olympics-like feel to the proceedings. For a Caucasian man in a sea of mostly Caucasian men, those really are the most pressing concerns. But it doesn’t seem to occur to him what it will be like to be a female fan in Qatar and every extra effort they’ll have to make. He doesn’t seem to consider how LGBTQ fans will have the words of Qatar representatives ringing in their ears the entire time, that they’ll be safe “as long as they are abiding by the local and civil law.” Let alone any concerns that African fans might have in a region of the world that doesn’t have a great track record dealing with them.

…If you care about politics but not to the point of letting it curtail your life’s experiences and if having the chance to see the best play matters and you don’t plan on winning the lottery in the next four years, Qatar might just have what you are looking for.

That kicker at the end of the post sums up the whole perspective perfectly. As Lauren Theisen at Deadspin notes, “for most of us, politics are our life’s experiences.” To go one step further, is it even politics? Is not supporting a regime that would throw LGBTQ people in jail for existing considered “politics?” Is not supporting a country that sees women as less than men “politics?” You have to be pretty far above what’s happening in the world, in America and across the globe, to be able to wipe those things aside easily so you can enjoy your beer and soccer match in peace.

In some ways, it’s enviable to be so detached and unconcerned. If that’s the case for you, enjoy the soccer. Just know it certainly won’t be played in a vacuum, in spite of your effort to pretend that it is.