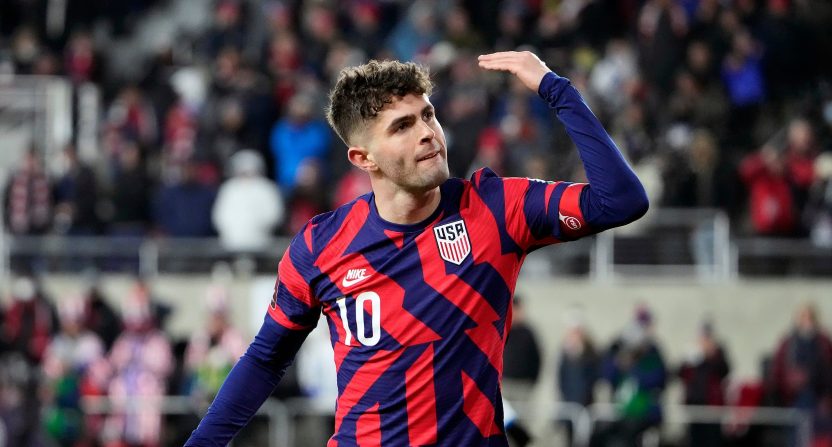 After failing to qualify for the 2018 World Cup, the USMNT earned its ticket to the 2022 World Cup in Qatar with a 2-0 loss in Costa Rica, summing up the Americans’ ultimately successful but occasionally underwhelming qualification campaign heading into Monday’s opening game against Wales at 2 p.m. ET on Fox.

Through a condensed qualifying schedule complicated by the pandemic and plenty of injuries that forced players like 20-year-old attacking talent Gio Reyna to miss a sizable portion of qualifying, the Americans earned the third and final automatic World Cup berth given to Concacaf, behind Mexico and Canada but ahead of Costa Rica via goal differential.

Albeit not a dominant performance in qualifying, all that mattered was getting to Qatar and seeing what this “golden generation” of the men’s national team players, who carry the pedigree of playing for the likes of Chelsea, Juventus, AC Milan and others in the toughest leagues in the world, can do in the greatest sports spectacle in the world.

Between a World Cup without the USMNT and one in which the U.S. will be a co-host, this is a real opportunity to capture the zeitgeist of casual observers who likely only watch soccer when their country is in the World Cup. This group of players should be the core of the roster for some time and has plenty of experience to gain in this tournament before 2026 when the USMNT could be a legitimate contender.

Coach Gregg Berhalter will have the second youngest squad at the World Cup, with an average age of 24. Only one player, DeAndre Yedlin, has played in a World Cup. The expected starting lineup will have all but three players 25 or younger and must survive a group of Wales, England and Iran.

But with the amount of young talent on the roster, led by Christian Pulisic, Reyna, Brenden Aaronson and Weston McKennie, a run to the quarterfinals in this tournament is a realistic possibility. At a minimum, the USMNT is the second-most talented team in Group B and should advance to the knockout stage.

Anything shy of that would be a failure.

What makes the quarterfinals a possibility is who the USMNT could face in the Round of 16, the first knockout stage game.

World Cup groups are drawn by having four pots of eight teams, split up by FIFA world rankings — an albeit imperfect ranking system. One team is picked from each pot for each group. Because Qatar is the host country, they were automatically in Group A from Pot 1, which is reserved for top teams like Brazil, Argentina, France and England. Being in Group B, the U.S. would avoid one of the eight best teams in the tournament regardless if they finish first or second in the group.

The winner of Group B will play the second-place finisher in Group A, and the second-place finisher in Group B will play the winner of Group A. In a normal tournament when they’re not hosting, Qatar would have been in Pot 4 as the 50th-ranked team in the world. Therefore, the strongest team the USMNT could face in the Round of 16 is another Pot 2 team, the Netherlands.

Now, based on performances in qualifying and two extremely disappointing tune-up games last month against Japan (2-0 loss) and Saudi Arabia (0-0 draw), there are plenty of reasons to doubt the Americans will advance from the group stage.

Outside of the U.S., the USMNT has struggled mightily to score. Berhalter’s squad was shut out in five of seven road matches in qualifying and failed to score in the two aforementioned warmup games. Though they have plenty of talent in attacking players Aaronson, Tim Weah, Pulisic and Reyna, the absence of a reliable goalscorer at striker continues to plague the US.

Ricardo Pepi, a 19-year-old who led U.S. strikers in scoring during qualifying, wasn’t selected by Berhalter for the 26-man roster. Josh Sargent, Jesus Ferreira and Haji Wright collectively had one goal in qualifying. Wright didn’t even receive a call-up during qualification.

The other major question mark is who the other central defender will be next to Walker Zimmerman.

Aaron Long has been a frequent target for criticism with the national team but has been Berhalter’s preferred choice. Tim Ream, however, is having a resurgent season at age 35 in the Premier League with Fulham. Berhalter chose him for the World Cup roster for Ream’s first call-up since September 2021. The U.S. will need a strong defense for any kind of run in the tournament.

What the USMNT has as a strength is their midfield trio of Tyler Adams, McKennie and Yunus Musah. They are regular starters for their clubs in the Premier League, Italy’s Serie A and Spain’s La Liga — arguably the three toughest leagues in the world — and excel in advancing the attack as well as stopping dangerous attacks. McKennie and Musah are seen as the X-factors who change how good this team can be when they’re playing at their highest level.

But like all other countries, the USMNT’s hopes of a deep run hinge on their star players. In addition to being as healthy as they’ve been in over a year, the Americans need Pulisic, Aaronson, Reyna and McKennie to play their best as much as they need the collective to be strong.

Getting out of Group B into the knockout stage should be the goal. But a successful World Cup will be getting to the quarterfinals for the first time since 2002.