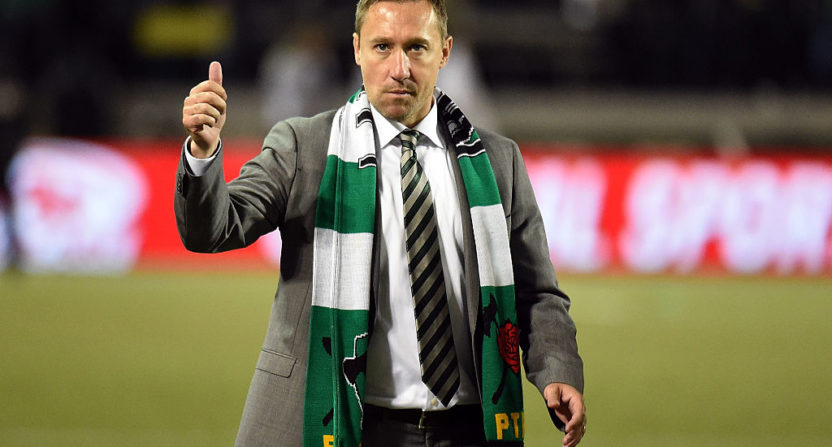 Caleb Porter has been with the Portland Timbers since 2013, and took a team that sputtered in its first two years in MLS to winning an MLS Cup by 2015. Porter had just signed a contract extension with the Timbers last year, so it looked like he was in for the long haul. This week, in a shocking move, it was announced that Porter was out as Timbers manager. Some of the reporting said his decision to depart was mutual, but many don’t believe that.

Mutual is a generous term from what I’ve heard https://t.co/xyBvWLTT8d

With a manager of his pedigree, the natural inclination is to believe that he wouldn’t leave without something lined up to follow, right? That doesn’t necessarily seem to be the case. And there is a vacancy with the US Men’s National Team, a job he’s bandied about for in the past. Is it worth connecting those dots here, or not? And if not that, what’s next for one of the most entertaining managers in MLS?

Porter is certainly a character. For bad or for worse, he’ll be remembered for not shaking Pep Guardiola’s hand during the 2014 MLS All Star Game against Barcelona:

Porter is fiery, fiesty, and a bit surly when he doesn’t get his way, and he can sometimes be a bit of an idelogue. That video clip is good evidence of that. There were rumors of a power struggle developing between Porter and GM Gavin Wilkinson, and power struggles over personnel never end well.

So now that he’s out, what could be his next move? He doesn’t have many options at this stage, with only one other current MLS vacancy in Colorado, and he’s not taking that job. So here are three possibilites for him:

He takes a “sabbatical” and waits for the next opportunity:

It’s quite possible that we don’t hear from Porter again for some time. If he didn’t leave for another opportunity right away, it’s clear he isn’t hankering for one. He has a resume that will get him almost any job in US Soccer, especially in MLS, but he’s not exactly desperate for one immediately. He’s only 42, so it isn’t as if his coaching candle has been fully burned at both ends, but maybe he’s run out of wick.

What MLS jobs would be potentially opening for him next season? He’d only take the biggest of the big jobs in the league, which may preclude him from plenty of the openings that may come, but Orlando City are still scuffling. If Jason Kreis doesn’t get off to a good start next season, watch for that possibility. And there have been surprising manager openings in the league in the past, and it would be a shock if he wasn’t considered for all of them that do open. There are more teams coming to the league soon, maybe one of them takes a look at getting Porter in their first season.

American soccer is waiting for a trailblazing American manager that was brought up through the coaching ranks in this country (so David Wagner doesn’t exactly count). At 42, Porter has the pedigree at both the college and club level that would certainly give him a chance in certain countries to try his luck. It would be a risk for both him and the club, but it’s not out of the realm of possibility he potentially tries to go that route. He’s a prideful man, and certainly wouldn’t have any problem taking a challenge of that scope. Would it be in England? Germany? France? Or some other league down the pecking order? It’s speculation, but no one should be surprised if Porter ends up linked with foreign jobs.

The US Men’s National Team

Certainly, Caleb Porter has been mooted as one of the best candidates for a future job as the coach of the national team. His pedigree speaks for itself, even if some of the shine has worn off. He’s qualified, and is no doubt a promising candidate. But before everyone starts to link him heavily with this job, even as an interim coach: consider US Soccer is undergoing a bit of chaos at the moment, and doesn’t even know who the President will be come February. It would be sketchy to hire a manger now under these circumstances. Will he be considered by Kyle Martino, Sunil Gulati, Eric Wynalda or whoever else ends up elected? Probably, but he’s certainly not getting hired now, nobody is.

In the end, there probably isn’t much more to Caleb Porter leaving the Timbers other than a behind-the-scenes power struggle over personnel and other decisions, which is certainly a surprise considering Porter’s successes in the Rose City, but not exactly uncommon in sports. While the surprise of the move has caused some to put two and two together when there isn’t quite two and two to put together, there is certainly intrigue as to what is next for one of the young and primed managers in US Soccer.

He’ll have his pick in the future, and maybe, he’ll be a trailblazer.

1 thought on “What’s next for Caleb Porter after leaving the Portland Timbers?”