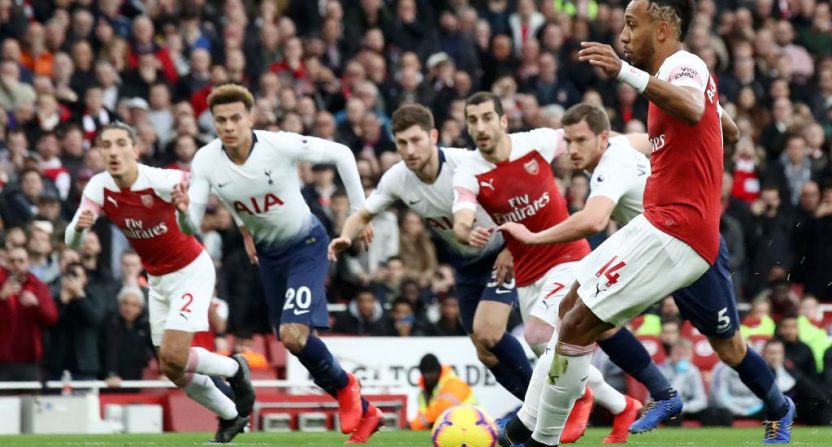 Here we are. Three games left in the Premier League season and the run-in is as exciting as it’s ever been. Manchester City and Liverpool are giving us a title race that not only is the highest scoring we have ever seen, it will go down to the wire for the first time since 2012.

Right below them, there’s only six points separating third place from sixth. For the final top four spot, and the Champions League money that comes with it, just three points separate Chelsea, Arsenal, and Manchester United.

And oh yeah, Manchester United and Chelsea play this weekend.

So which of the four teams battling it out for third and fourth place need to finish high and qualify for Champions League the most? We’ll tackle this from ‘needing it the least’ to ‘needing it the most.’

With Manchester United facing a massive rebuild this summer, the belief is that they need to qualify for the Champions League in order to sign the best players. That statement isn’t a myth, but it’s not 100 percent true either.

Playing in the Europa League in 2016/17 didn’t stop United from signing Paul Pogba or Zlatan Ibrahimovic. Not playing in Europe at all in 2014/15 didn’t stop them from signing Angel Di Maria. Hell, Liverpool have qualified for the Champions League just three times since 2010. That hasn’t stopped them from building a Premier League juggernaut this year.

Furthermore, United will have a young team next year. Playing in the Europa League won’t be the end of the world to get some of those younger players valuable experience, and it’s a trophy they would be frontrunners to win.

Like United, Chelsea have the money to sign whoever they want. They also have the benefit of London being a far nicer city to live in than Manchester. Unfortunately for Chelsea, they probably won’t be able to spend that money this summer because of a transfer ban.

That places their need to finish top four a little lower, since they can’t lure any players to Stamford Bridge anyway.

However, they’re likely to give Maurizio Sarri another year, and he’ll be unable to build the team he wants. That means things can either finally start clicking for his current squad or things can really go haywire next season. There’s a big difference between being out of the Champions League for a season, and being out of it for three years.

Here’s the thing about Arsenal. They have the money and their matchday revenue is among the highest in the world. They have the location, London is still better than Manchester. What they also have is a horrible owner who hates spending money on the club.

Stan Kroenke tends to only spend what he brings in on the club, if that. Therefore, without the prospect of Champions League football, Arsenal doesn’t really have much to offer? Between Arsenal and Chelsea, the West London side is much more equipped to rebound from a few years out of the Champions League.

Chairman Daniel Levy has always been stingy in the transfer market and Tottenham players earn lower wages than what other teams would be willing to pay them. But Tottenham’s biggest issue isn’t signing new players, it’s hanging on to their own.

The core of Tottenham’s current team has been together for nearly five years now. They love each other, they’ve all expressed a desire to win not only together, but at Tottenham. The problem is they’ve won nothing so far.

Harry Kane and Dele Alli have long been coveted by Real Madrid. Christian Eriksen hasn’t re-signed and could be on his way out this summer. Son Heung-Min has let the world know how valuable he is this season. If one leaves, there could easily be a domino effect.

Unlike all the other teams here, Tottenham are most like the Hoffenheim’s and Wolfsburg’s in the Premier League. If they don’t finish in the top four, who knows what their team will look like next year; and if there is an exodus, who knows when they’ll get back in Europe’s premier competition.