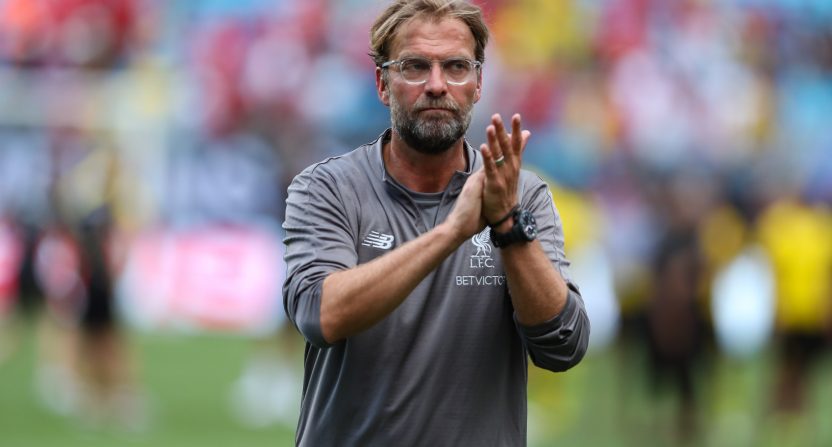 Liverpool’s fourth round penalty shootout win over Arsenal in the Carabao Cup has unsurprisingly created a massive fixture pileup for the Reds. With Liverpool confirming their participation in this year’s FIFA Club World Cup last week, the Reds will play a semifinal match in Doha, Qatar on December 18th and would be involved in the final or the third place game on December 21st.

That makes them unavailable for the 5th round of the Carabao Cup scheduled to take place December 17/18. Reds boss Jurgen Klopp is now threatening to withdraw Liverpool from the competition unless the EFL and Premier League can find “a suitable date” for their away clash with Aston Villa.

The Premier League and Football League have been in talks to move the match to the week of January 6th, when the first leg of the Carabao Cup semifinal is scheduled, but Klopp insists his team won’t take further part in the tournament if the eventual date complicates an already demanding schedule.

“I’m not concerned, somebody else has to be concerned because we didn’t make the fixture list, we didn’t make the schedule,” said the Liverpool manager. “Fifa told us the Club World Cup will be there [Qatar] and we have to go there and we will do. The Premier League tells us we have to play in the Premier League, which we do obviously. The Carabao Cup, what we did tonight, if they don’t find an appropriate place for us, not 3am on Christmas Day, then we don’t play it.”

This isn’t the first time Klopp has spoken out about the outrageous demands FIFA puts on players. In his first season on Merseyside, Klopp made the usual complaints about the English festive period fixtures that all foreign managers tend to make. Last season, he openly complained about the demands the new UEFA Nations League put on players.

Klopp is right. The schedule is brutal. Liverpool already have to reschedule their Premier League clash with West Ham that was supposed to take place on December 21st. As soon as they return from Doha, they jump right into the festive period and the third round of the FA Cup.

It’s good that Klopp is speaking out on behalf of his players because someone has to. Players aren’t machines. If you overuse them, they’ll break.

Yes this has happened to English teams before when Manchester United and Chelsea participated in the Club World Cup (United even won the League Cup that year) but the demands on players bodies have changed since then.

For starters, Klopp’s pressing style is very demanding on players. And since he’s had success with that style, it’s been copied in many places around the world. That makes matches that much more intense, requiring that much more running, and that much more recovery time. It’s very easy to pick up muscle injuries from overuse.

As European Champions and having a great chance of winning their first top flight title in 30 years, I’d think Liverpool fans would jump at Klopp’s suggestion to just withdraw from the tournament. But this morning, when I spoke to a friend of mine who’s a Liverpool supporter, the answer I got was more of a bummer because of the team Liverpool put on the field Wednesday.

Liverpool’s starting XI against Arsenal featured four teenagers, with another coming off the bench. The kids took on a much more senior Arsenal side and played out a thrilling 5-5 draw. They were good, the fans loved watching them, and it’s understandable they would want to see more of them.

Which ultimately begs the question, why would Klopp withdraw from the Carabao Cup? Why not take the game and just play the kids against Aston Villa?

I’m not talking about give a few kids a chance here and there. Yesterday’s team also featured Alex Oxlade-Chamberlain, Divock Origi, Adam Lallana, and Naby Keita. You wouldn’t play them in this match. You’d straight up take your U23 squad. Give out seven or eight debuts if you have to.

Wouldn’t that be more beneficial to Liverpool to have their academy players go against more senior (read: older, bigger, stronger) players? Even if they get blown out, what’s the difference? The alternative was not making the semifinal anyway.

Finding a date is going to be impossible. Why doesn’t Klopp just say to the EFL, “I’m happy to play my U23 side against Aston Villa. If you think that’s disrespecting the competition, then we’ll withdraw from it. It’s up to you.”

He doesn’t have to say it in the ultimatum way that I just put it, but he can let them know that he’s not willing to risk the health of his first team players.

It’s not like playing the U23s is throwing in the towel. I’m not going to say that Liverpool’s reserves would certainly beat Villa, but it’s likely that the Claret and Blue’s would also rotate their squad a bit and we’d have ourselves a game. Besides, the alternative is literally throwing in the towel and nobody plays.

Klopp is completely in the right here. He’s looking out for his players when no one else is. But don’t withdraw from the tournament. Play your kids, let Villa get the match revenue and make your fans happy by getting to see these bright teenagers on the big stage another time.