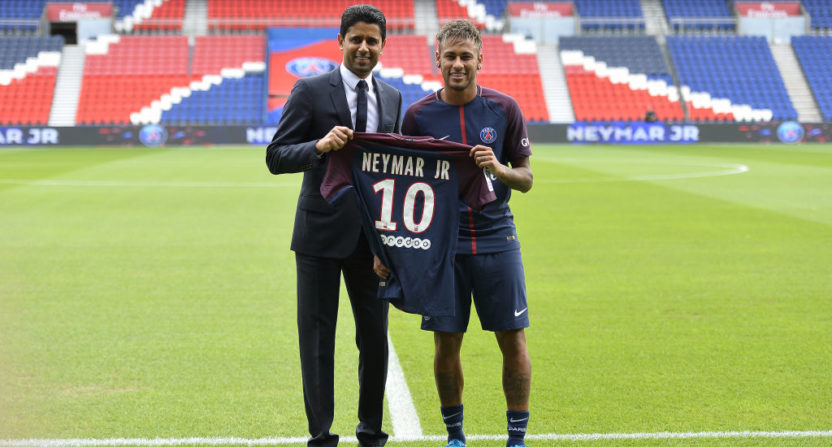 As August ends, so too does the summer transfer window. This summer has seen plenty of drama. From the nearly endless circus that was the Neymar saga, to Alexis Sanchez staying put at Arsenal and everything in between, it was an eventful window.

Now that it’s all over, clubs across Europe are about to find out who wasted all that money, and who found the bargain of the summer. Who won the transfer window, and who suffered a crippling defeat?

Paris Saint Germain spent so much money this summer. The absurd sums of money pouring out of the French capital will bring in some lofty expectations. On paper, PSG should have one of the best teams on the continent now. The front three of Neymar, Kylian Mbappé, and Edinson Cavani is one of the game’s best. Neymar and Mbappé are both young talents who should have no trouble demolishing Ligue 1 defenses. Mbappé is in Paris on a one year loan with an option to buy. PSG will certainly pick up that option next summer as a way to skirt some of the financial fair play rules.

PSG’s big summer didn’t stop with Neymar and Mbappé, however. The French side picked up Juventus’ Dani Alves on a free transfer. Alves, who has plenty of experience playing alongside fellow countryman Thiago Silva. This club has more than enough firepower going forward, and with a stronger defense, they should be one of the favorites to win the Champions League. They will almost certainly win the French league at a canter.

As Philipp Lahm and Xabi Alonso retired, the German champions were set to get younger this summer. The club ended up making a number of deals that succeeded in not only getting younger, but more dynamic. Bayern made one big signing by bringing over French midfielder Corentin Tolisso. The 22-year-old is Bayern’s must expensive transfer in Club history at 41 million Euros. It’s a bargain price that was done early in the window before the market exploded. Tolisso has already found the back of the net for his new club, and early signs point to him being a crucial replacement for Alonso.

Bayern’s two signings from Hoffenheim combine for the 1st goal of the #Bundesliga season! ? #FCBB04 https://t.co/IxqxfZvrvn

Bayern has also seen early returns on a few other players brought in this summer. Niklas Süle and Sebastian Rudy both came over from Hoffenheim. Süle is a big strong centerback who scored the opening goal of the Bundesliga, and Rudy has looked like a set piece maestro. James Rodriguez also arrived to make the club younger and more talented. He’s currently injured but should boost Bayern’s already impressive midfield when he returns. The only strike against Bayern’s summer business was the failure to bring in a backup center forward. The club will have to hope Robert Lewandowski can stay healthy.

This was a bad summer for Barcelona. Really bad. Not only did they fail to keep one of their cornerstone talents from jetting off to Paris but they failed to get the big signing they wanted from Liverpool. The Catalans did manage to secure the services of a future superstar in Ousmane Dembélé, but even in that process, they ended up looking like bad guys. Dembélé’s disappearing act in Germany that lead to a suspension wasn’t a good look for the 20-year-old or his new club.

Signing Paulinho for a huge fee also raised some eyebrows immediately after the Neymar deal went through. Some viewed the transfer as a panic buy. It seems like Barcelona are in the middle of an identity crisis. With some of the clubs’ long serving players getting older, there seems to be some confusion about where to go from here. Barcelona hasn’t really found someone to step into that Andres Iniesta role when he moves on. Barcelona is going to have to figure something out quick, especially after getting embarrassed by their biggest rival in the Spanish Super Cup.

The biggest transfer win for Liverpool this summer seems to be that Philippe Coutinho isn’t on his way to Spain. The Brazilian was heavily linked with Barcelona, but his current employer held firm that he would not be going anywhere. The Reds look like they’ll have one of the Premier League’s best attacks this summer and Coutinho will be there to pull the strings.

Hey, @LFC fans, this is what you can look forward to from Naby #Keita!

But for now you'll have to keep watching him in the #Bundesliga ? pic.twitter.com/3Do71AvAVV

Joining Coutinho this season is a pair of talented forwards. Egyptian Mohamed Salah and Alex Oxlade-Chamberlain both add to Liverpool’s formidable attack this season. Jurgen Klopp appears to be building Liverpool in the same vein as his Bundesliga winning sides at Dortmund. Liverpool should be fast, high energy and high scoring. They might struggle to defend at times, but scoring won’t be a problem. Liverpool’s new look attack dismantled Bayern Munich in a preseason tournament, that bodes well for the coming campaign. Throw in the agreement to purchase Naby Keita from Leipzig next summer and it’s been a productive window for the Reds.

The best news for Arsenal this window was they managed to hang on to their best player. Alexis Sanchez will remain a Gunner for the rest of the season, or until January. The problem is, he’s almost certainly be out the door come next summer. Arsenal just wasted their last best chance to cash in on the Chilean. There was certainly some reluctance to sell him to a major rival and Sanchez really priced himself out of a move to Bayern Munich, but this felt like something that made financial sense. Maybe with the addition of Alexandre Lacazette, the Arsenal board could convince their star player that they are a winning side in the making. But that seems slim.

Arsenal’s real issue is still their defense. They brought in left-back Sead Kolasinac, which is a decent signing. But Arsene Wenger failed to address their centerback problem. The North London club was badly beaten by a very good Liverpool attack recently, and without reinforcements, things aren’t going to get any easier.

It seemed like all summer, Alexis Sanchez would be headed out of Arsenal. The 28-year-old clearly wants a shot at the Champions League and he’s not going to get that in North London. Wasting a year of his prime is tough for him, but there are some silver linings. For one, he’s going to have a better attack around him this year if he can stay motivated. Secondly, he’s going to have plenty of suitors in the summer when his contract with Arsenal expires. He’s going to get paid next year, but it has to be frustrating this season that he wasn’t able to make the move he clearly wanted.

Based solely on results, Manchester United must be thrilled with the business they’ve done this Summer. Romelu Lukaku is a proven finisher and has already scored three in three matches for the Red Devils. He replaces Zlatan Ibrahimovic, who in turn returns to back up the new Belgian. United will hope Ibrahimovic is healthy by the time Christmas rolls around. If so, they will have a very deep bench. Lukaku might have come over for a bit more than he’s worth, but if he keeps scoring United fans won’t complain.

However, the best business United has done this summer might have been taking Nemanja Matic off title rivals, Chelsea. The defensive midfielder has been one of United’s best players. He’s covered the back line well and allowed players like Paul Pogba to get forward. Matic is the kind of player that is crucial to a Jose Mourinho side. He might just be the final piece for United’s Premier League hopes.