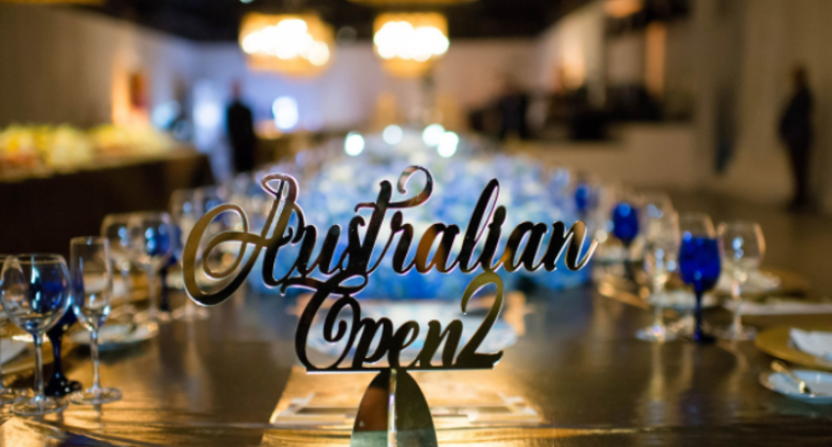 Tennis star Serena Williams got married to Reddit co-founder Alexis Ohanian in New Orleans Thursday, and the Vogue story on the wedding is just full of insane details. Here are 10 of the craziest.

10. The way they met, and the proposal: This is squeaking in there because it’s not technically part of the wedding, and it’s also been out there for a while, but can we just point out that this is pretty remarkable?

It all started in Rome with a meet-cute worthy of a romantic comedy. Despite being notoriously disciplined, Serena is not a morning person. But she’d heard good things about the epic breakfast at the Cavalieri Hotel, where she was staying for the Italian Open, so she got out of bed early and went with a few members from her team to check it out. They arrived at the buffet only to find that it had closed just five minutes earlier, so instead, they grabbed a table by the pool and ordered à la carte. Alexis was speaking at a conference and staying at the same hotel. That morning, he had also made his way down early to indulge in the buffet he’d heard so much about. When he, too, discovered that it was no longer open, he took a seat at a table next to Serena’s with the intention of ordering food and doing work on his laptop.

Frustrated that an interloper was encroaching upon their space, Serena’s friend Zane started teasing Alexis, saying there was a rat at his table and that he should move. “I was so annoyed that he’d sat down next to me,” remembers Serena. “There were so many empty tables!” Undeterred by the frosty reception he seemed to be receiving, Alexis jokingly responded saying that he was from Brooklyn—he’d seen lots of rats, and they didn’t bother him. Serena started cracking up and asked him to join her group.

…Fast-forward 18 months later and the Internet entrepreneur was proposing to the superstar. “I came home one day to find my bags already packed for me, and I had absolutely no idea where I was going until I got on the flight,” Serena admits. “Alexis flew me out to Rome, back to the exact table where we’d met. We were both really nervous but also excited to take this huge step. It was such a beautiful moment.” Ever the jokester, in addition to having the hotel cleared and flowers everywhere, Alexis had placed a small plastic rat on the table. Serena announced her happy news by posting a sweet poem on Reddit.

A sweet poem on Reddit? Well, that’s clearly not fitting with much of the site’s content. Also, in the words of Ralph Wiggum, “The rat symbolizes obviousness!”

9. The baby’s Instagram followers: “In September, Serena gave birth to the couple’s first child, Alexis “Olympia” Ohanian, Jr., and the two parents are absolutely besotted with their now 2-month-old daughter. The baby, who already has more than 105,000 Instagram followers, was present for the ceremony last night and looked on as her mom and dad tied the knot among 200 family and friends in the Big Easy.”

Yes, the baby’s Instagram followers were clearly a vital addition to this story.

8. Serena started talking with her wedding planner…about dogs? “Once they’d settled on a date and a place, they hired their wedding planner. “I knew early on that I wanted to work with someone on the East Coast, and Jennifer [Zabinski] felt fresh and new, but also has a lot of experience in planning and is organized and thorough,” explains Serena. When Jennifer first met with the bride, the tennis champ wasn’t quite ready to get into specifics, so the two discussed their mutual love of dogs instead. “I think she had to feel comfortable with getting to know me and me getting to know her,” Jennifer says.”

I would like to point out that I am readily available for on-the-clock conversations about dogs. Just don’t ask me to follow it up with wedding planning.

7. She wore $3.5 million worth of jewelry: “Serena emerged in a dramatic strapless, belted Sarah Burton for Alexander McQueen princess gown with a cape, carrying a bouquet of white roses and sparkling with jewelry by XIV Karats, worth $3.5 million in total.”

The idea of walking around wearing $3.5 million in jewelry is pretty remarkable.

6. They made the guests watch a relationship video on gold-framed TVs: “At 5:15 p.m., guests including Beyoncé and her mother, Tina Knowles; Kelly Rowland; Kim Kardashian West; Anna Wintour; Ciara; and La La Anthony arrived for cocktails before taking their seats in the ceremony space. There, everyone watched a short video that told the story of Serena and Alexis’s relationship on TVs encased in gold frames above the aisle.”

We’ve come so far since relationship slideshows on film projectors…

There’s nothing I can add to that sentence.

4. The clothing. So much of the clothing here is absurd. Consider this about the second of Serena’s three dresses:

“Serena debuted her second dress of the evening, a dramatic beaded, feathered Versace moment that made her look like a fashion-forward superwoman. It took a team of five embroiderers to create the dress, Donatella Versace told Vogue. They ‘worked nonstop to make sure the tiniest details were perfectly taken care of, for a total of 1,500 hours.'”

Or these bejeweled Nikes for the after-party: 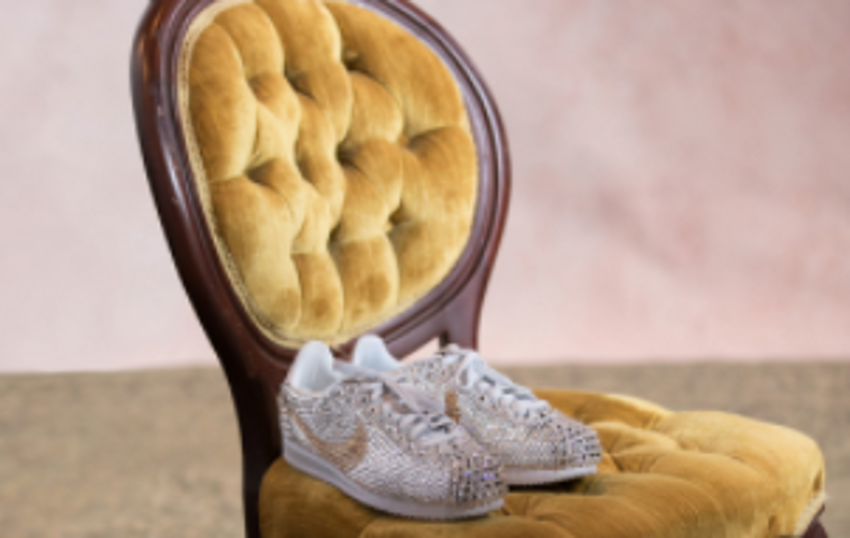 Now that’s one heck of a sponsorship benefit.

3. The food: They served “Southern, Armenian, and Italian food, as well as a “steak house” station and a salad wall.” A “steak house station”? And what in the world is a salad wall? Oh, and desserts dropped from the ceiling during the afterparty. And speaking of sponsors, there was a “Gatorade recovery bar”: 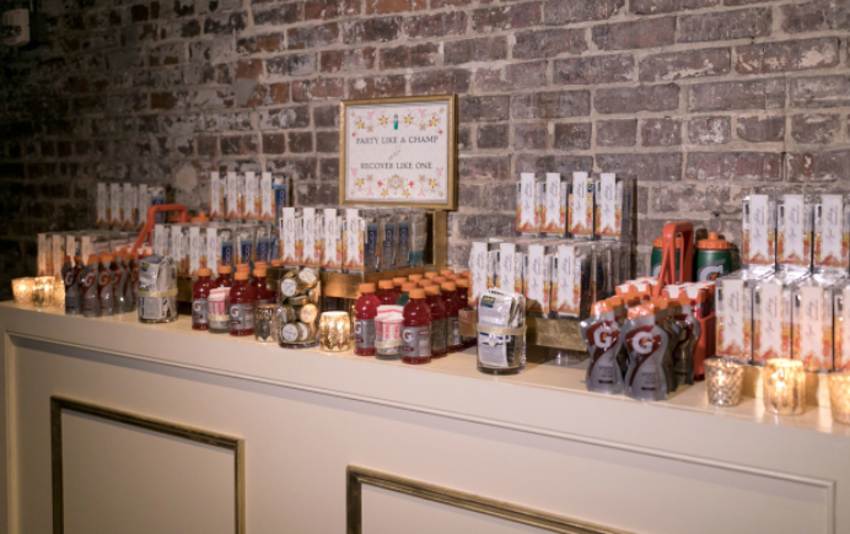 2. The decor: So, the whole thing was Beauty and the Beast themed, which, whatever. If you want your wedding to be about a story of kidnapping, more power to you. That led to plenty of over-the-top ballroom touches, including thrones for the bride and groom. But can we also talk about seating guests at tables named for Serena’s major wins? 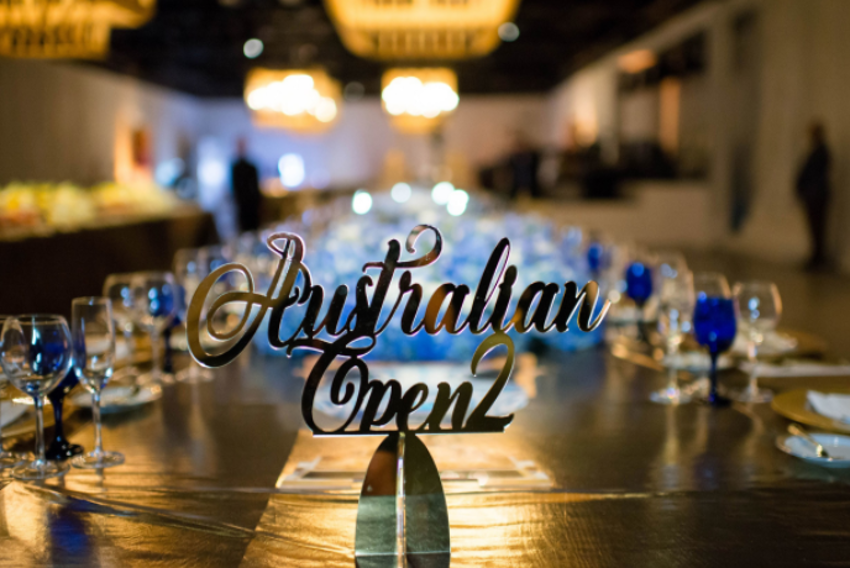 Oh, and the guests got takeaway trophies: 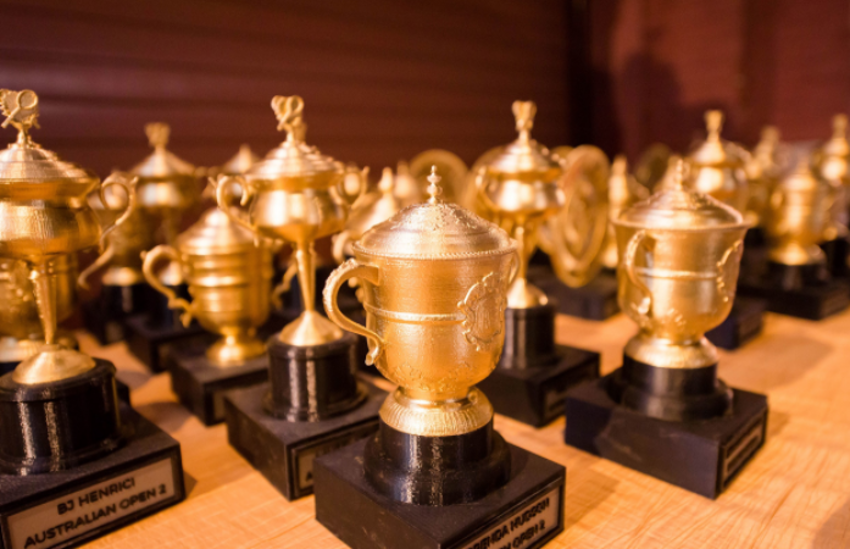 1. The carousel, and “Pony”: This is the highlight of this whole thing:

“Curtains then opened, and everyone relocated back to where the ceremony had taken place—Preston’s team had completely transformed the space into a chic lounge for the after-party. DJ Mike Wise was on the turntables playing lots of old-school ’90s rap. At about 1:30 a.m., Alexis grabbed the mic to reveal the final surprise of the evening for his new bride. People told him it couldn’t be done, he said. But, when people say no to Alexis in his business or personal life, he always accepts the challenge. Just then, a curtain dropped, revealing an illuminated, all-white carousel. Serena screamed with excitement, and guests jumped up on horses while Ginuwine’s “Pony” played in the background. The newlyweds cuddled on a bench while everyone partied on the carousel as it spun—a picture-perfect scene to end a fantastical night.”

That may be the best usage of “Pony” since Ginuwine performed it in memory of Little Sebastian. Also, this is a pretty solid carousel. (But it raises the question of how Ohanian snuck it in. Was it a Trojan carousel?) 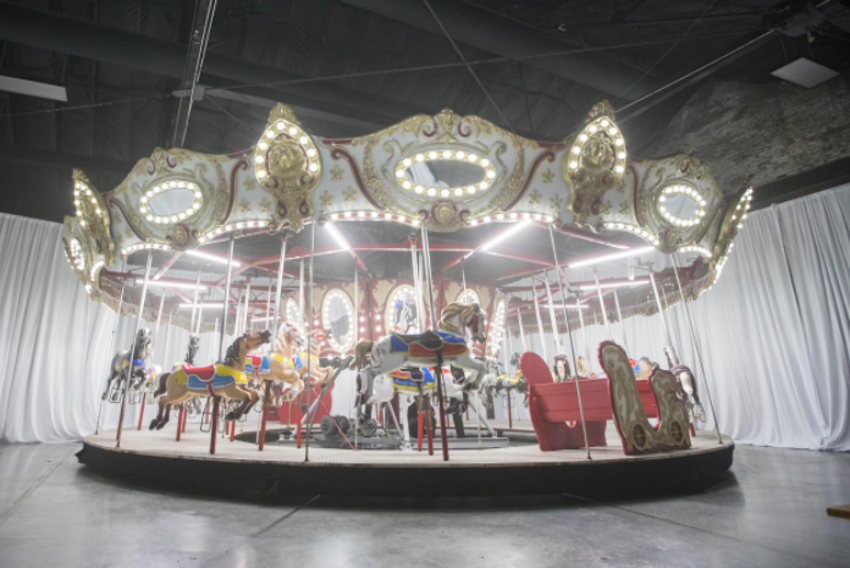 Here’s a nonplussed Beyoncé on it: 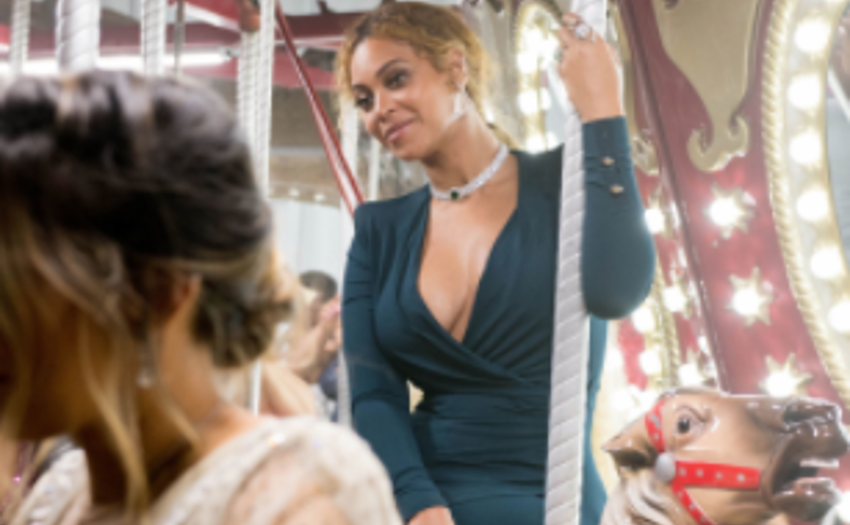 This whole thing is just crazy, and the whole story and slideshow are worth checking out. But it’s clear that Williams goes big when it comes to weddings, too, not just when it comes to tennis.