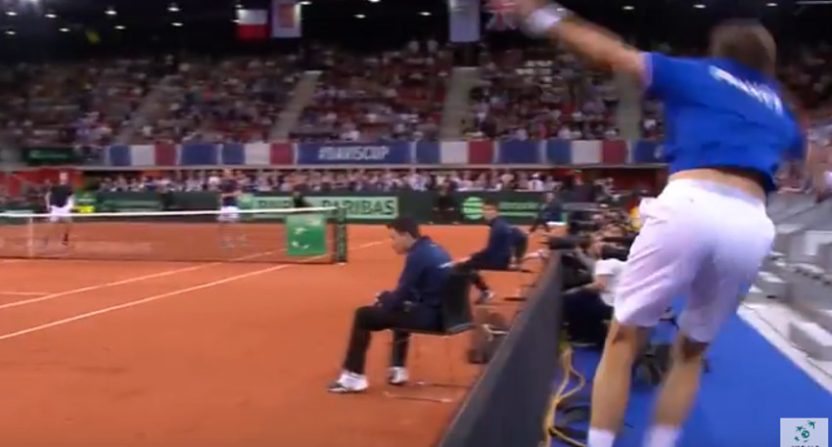 We sometimes see baseball or basketball players diving into the crowd to make a play, but it’s more unusual to see it in tennis. That’s what France’s Nicholas Mahut did during a doubles match against Great Britain in the Davis Cup quarterfinals Saturday, though. His momentum returning one shot carried him out of the court and into the stands section, and an opponent then smashed the ball at an angle that normally would be unreturnable. However, because Mahut was already so far out of play, he was somehow able to alter his course from returning to the court, jump, hit this and keep it alive:

This particular play didn’t work out for Mahut, as the next smash came before he could get back to the court. However, he and partner Julien Benneteau got the last laugh, beating Jamie Murray and Dominic Inglot 7-6 (9-7), 5-7, 7-5, 7-5 to put France up 3-0 and clinch the tie for them. As The Guardian‘s Kevin Mitchell wrote, “It was a tight match of high drama, thrilling skill and bags of commitment extended over three hours and 20 minutes in front of a passionate gathering in a small noisy hall, a classic Davis Cup occasion, and one which players and fans are desperate to preserve.”

Mitchell notes that the Davis Cup is under some pressure, with officials looking to cut the singles matches from five to three sets to try and attract more top players. The tournament still has plenty of interest for fans, but some of the top singles players opt not to compete for their country given the rigors of their tournament schedules. But the Davis Cup does still see some great players like Mahut (who’s tied with Rafael Nadal for the third-most titles on grass in ATP history, behind only Roger Federer and Andy Murray, and also played in the longest match in tennis history against John Isner at Wimbledon in 2010), and some great moments. The tie Saturday certainly featured one of the most unusual shots you’ll ever see.