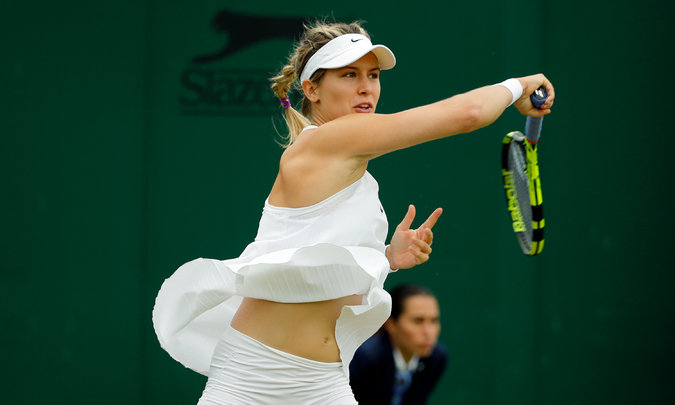 At this year’s Wimbledon tournament in England, female tennis players signed with Nike aren’t wearing the typical outfits of shirts and skirts. Instead, Nike has paid them to wear loosely hanging short dresses.

For some players, these dresses aren’t exactly a hit.

The dresses are white, which conform to Wimbledon’s dress code, but aren’t exactly ideal for tennis some players said. While the material does breathe and is loose, the dress comes up at the worst times, thus leading to wardrobe changes.

“When I was serving, it was coming up, and I felt like the dress was just everywhere,” Rebecca Petersontold reporters. “In general, it’s quite simple, the dress, but it was flying everywhere.”

Peterson was one of a couple tennis players to improvise while still wearing the dress. She wore a long-sleeved shirt over the dress to hold it in place. Katie Boulter wore a headband around her waist to serve as a belt. Lucie Hradecka wore leggings under the dress, thus turning it into a skirt.

Jiri Fencl, Hradecka’s coach, said she felt cold with just the light dress on, thus another reason for the leggings.

“That was the first dress she ever tried on in practice,” Fencl told reporters. “She saw it was very short and that it flies, so she was trying it. Sometimes, with two hands you can grab the dress if it flies a lot. I think every player was like, ‘Hmm, that’s short.’ She was worried about it in doubles, too, because when you get up from I-formation, you can grab it.”

All of this wasn’t what Nike expected to happen when they rolled out the dresses. Before the tournament began, Nike released the following statement to promote the dress:

“NikeCourt female team athletes will compete in the one-piece NikeCourt Premier Slam Dress, which represents a departure from the skirt-top combinations worn in previous Grand Slams… Despite the traditional aesthetic, the dress features modern design elements such as power pleats and racerback construction, which work in tandem to enable the athlete’s movement.”

However, during qualifying last week, Nike saw the dress wasn’t all that it intended. Despite possibly working well in testing, at Wimbledon the dress came across as shapeless and troublesome.

Prior to the end of qualifying, Nike sent players a message asking them to bring their dresses in for some changes in order to comply with Wimbledon rules, according to The Daily Mail. The only alterations made by the Nike tailor were the slits on each side were sewn up to make the dress steadier and hopefully prevented it from flying up as much.

“The product has not been recalled and we often customize products and make alterations for athletes as they compete,” a Nike spokesman said. “We work closely with our athletes to provide them with product that helps them perform and feel their best on the court.”

Despite the alterations, Nike did give its players the option to switch back to the traditional skirt and shirt combination. Some players took them up on that offer.

“I’m really happy that I have this opportunity, because if you feel good on the court you can play better,” Daria Kasatkina said. “If something is bothering you all the time, no. I tried the dress during a practice, and I didn’t like it so much. It was always going up, so you can see the stomach, everything. It’s not very nice.”

2014 Wimbledon finalist Eugenie Bouchard was the player Nike used to model the dress while promoting it, and she’s a fan.

“For me, I love it,” Bouchard told the network TSN. “It’s nice and short so you can move around and be free with your movements.”

While most female tennis players who are are sponsored by Nike have had to deal with the dress issues, the company’s biggest female tennis client Serena Williams hasn’t. Williams has unique outfits from Nike provided for her and the dress wasn’t given to her for this year’s Wimbledon tournament.